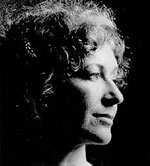 see also Dame Felicity Lott (soprano)
Felicity Lott was born and educated in Cheltenham and studied at the Royal Academy of Music in London.

As a concert artist, Felicity Lott sings with all the major orchestras and festivals throughout the country, and appears regularly at the BBC Promenade Concerts. She has sung with the Berlin Philharmonic, Vienna Philharmonic, the Concertgebouw and Chicago Symphony Orchestras, at the Salzburg Easter and Summer Festivals. She has given recitals all over Great Britain and has a particularly close association with Wigmore Hall. She has appeared as a recitalist in Paris, Monte Carlo, Brussels, Amsterdam, Cologne, Berlin, Frankfurt, Geneva, Lisbon, Rome, Florence, La Scala Milan, Hong Kong, New York, Sydney, at the Salzburg, Prague, Bergen and Munich Festivals, and the Konzerthaus and Musikverein in Vienna. She was a founder member of Graham Johnson's The Songmakers' Almanac.

These successes are mirrored in her wide range of major recordings under such conductors as Solti, Haitink, Janssons, Marriner, Mackerras and Jarvi and her love of the song repertoire is reflected in her extensive recordings of Wolf, Schubert, Schumann, Strauss and the masters of French mélodies.

Felicity Lott was awarded the title Chevalier dans l'Ordre des Arts et des Lettres by the French Government. She was made a CBE in the 1990 New Year Honours and in 1996 was created a Dame Commander of the British Empire.