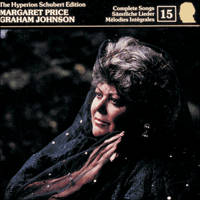 This is the third and last disc in the Hyperion Schubert Edition to be devoted to night songs. Single settings by Kosegarten, Kumpf, Pichler, Salis-Seewis, Ossian, Mayrhofer and Leitner are heard next to paired songs to poems by Hölty, Baumberg and Craigher. The most substantial group is the set of four songs to texts by the composer's young Viennese contemporary Gabriel Seidl; these poems first appeared in 1826 in a volume entitled Songs of the Night (the title page is pictured above) and were turned into music soon after. Thus it was that writers of Schubert's own time gathered their nocturnal poems under the cover of darkness, as it were. It is clear (with his Opus 80 songs, for example, all of which have a night-time setting) that Schubert was also fascinated from time to time by the idea of grouping together for publication those of his songs with a thematic link. Encouraged by his example we have constructed our own nocturnal anthologies on disc for this series. This tradition of 'Lieder der Nacht' has continued among song composers and reached its twentieth-century apotheosis with Benjamin Britten in a number of important works and cycles including the famous Serenade for tenor, horn and strings, an anthology of settings by Jonson, Keats, Blake, Tennyson and others. English poets have always been keen to mine the depths of their nocturnal imaginings, but it was the work of our eighteenth-century poets in this regard which was most to affect the world of Lieder. One of the most influential homages to night in this epoch of English literature was Edward Young's mighty poem, 10,000 lines of 'delightful gloom', Night Thoughts on Life Death and Immortality (1742–5). Translations of this work in turn inspired a number of German authors some of whose poetry Schubert set to music. Thus it was that 'big' night music—words and sounds to match the dark nocturnal mysteries (as opposed to the charming 'little' night music of Mozart's century)—was a feature of European romanticism which crossed all national frontiers. The prefatory essays to Volumes 6 and 8 explore Schubert's fascination with night, sleep and dreams at greater length.

In the following commentaries four major studies on Schubert are referred to under their authors' names. These are: Richard Capell Schubert's Songs (1928); Alfred Einstein Schubert (1951); Dietrich Fischer-Dieskau Schubert—a biographical study of his songs (1976); John Reed The Schubert Song Companion (1985).