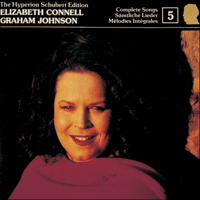 Schubert and the Countryside

‘Once more Graham Johnson puts us in his debt by his considered juxtaposition of apposite songs and by bringing to notice pieces, not to say masterpieces, that have been unduly neglected. Elizabeth Connell is at her very best here’ (Gramophone)
‘A must for all Schubertians’ (American Record Guide)
‘I have never heard Elizabeth Connell's voice more beautifully caught on disc than in this Schubert series’ (The Guardian)
‘14 of Schubert's most verdant Lieder, presented with a purity of voice which matches their purity of heart’ (The Times)

Schubert and the countryside
One of the most charming pictures in the iconography of Schubert's life is Leopold Kupelwieser's little watercolour 'Landpartie der Schubertianer' painted in 1820. It was then that the composer was first included in an invitation to spend a few summer days at Atzenbrugg, a property belonging to the Klosterneuberg monastery on the south bank of the Danube, and some twenty-three miles from Vienna. In the background of the picture we see the Aumühle which was a pleasant carriage ride from Atzenbrugg, and which might well have been an inspiration to the composer three years later when he set about finding the sounds of mill-wheels for Die schöne Müllerin. There is a hint of a golden summer sunset behind the hills, and it seems to me that the horse-drawn carriage in the foreground, and the ladies and gentlemen in it, are homeward bound. All the men are wearing top hats except for one rueful young swell standing on the running board. I expect that Kupelwieser intended the shapeless, dark clump he painted under the carriage wheel to represent that young man's crushed hat; at first glance it seems more like an expression of a sturdy horse's disdain for the holiday-makers. In the background we see the small (and trimmer than usually depicted) figure of Franz Schubert, arm-in-arm and deep in conversation with someone (probably Franz von Schober). They have missed the bus, and seem quite contented to walk back to Atzenbrugg. This picture is surely the best of a very few representations we have of the outdoor life of the Schubertians. There is a freshness and vitality here, not only in the people, but in the limpid bluey-grey of the evening sky and the long stretch of unspoiled, and undeveloped countryside. Even the carriage is moving on nothing resembling a road.

Schubert lived in an epoch and in a corner of the world which were not yet significantly marred by the immutable march of the Industrial Revolution. In 1829, the year after his death, the first steam ship sailed down the Danube and the first gas lighting appeared in Vienna, but the speed of our hero's daily life was governed by horses (when he did not walk that is, for Vienna was a relatively small city). The famed Schubertiads took place by the flicker of candlelight, and the large number of afternoon concerts in Vienna at the time is explained by the cost of putting on evening concerts where the main item of expenditure was candles. It is true that Vienna was full of dirty houses, unsavoury brothels and unhygienic hospitals (and it is fairly certain that Schubert visited at least one of each of these in his time) but the beauties of the countryside were an escape from those things, and an ongoing lesson for Man who looked to nature's example to find the best within himself. Schubert was not conventionally religious, but encouraged by friends like Franz von Bruchmann, and in common with many artists of his time, he was drawn to the writings of scholars like Fichte and Schelling who made man's relationship to God via Nature a cornerstone of their philosophy. In his songs Schubert described streams and forests and skies as yet untouched by chemicals, acid rain and the reverberations of aeroplanes. The natural marvels of the earth were a mainstay of his belief, despite all his personal setbacks, in a beautiful world. The romantic artist expected the perfection of God to be mirrored in the unsullied perfection of nature. It is true that forward-thinking people like Goethe welcomed the scientific advancement of mankind, but with scarcely any idea of what the costs of progress might be. A number of Schubert's friends, including the poet Mayrhofer, were worried by the effects of so-called modern civilisation and regarded classical antiquity as an unspoiled golden age, and a much better model of what society should be.

Schubert's friends called him Schwammerl or 'Little Mushroom': the nickname described the comfortable shape of this short man of portly bearing. In our own century menaced by nuclear warfare, the mushroom cloud is the terrifying shape of something which even the wildest flights of Schubert's uniquely fertile imagination would have failed to fathom. His music of innocence paints the natural world before man's ecological fall. We may have learned how to cure the illness which killed Schubert at the age of thirty-one, but we have not learned how to conserve the natural beauties which sustained him, and which he hymned and apostrophised in so many of his Lieder. There is no conventional love music on this disc (the surrender of Ganymede to Zeus in Ganymed hardly falls into this category and in any case it incorporates Goethe's gloss of mankind's longing to be at one with nature) but the Schubert Lieder in praise of nature are a type of love music of their own. In these works there is often an urgency and poignancy which seems to imply, as in the song Wehmut, that nature is as vulnerable as man himself. It is true that the romantic poet's main concern is death: they will have to leave these wonders behind. But at times it is almost as if the poet and composer had also somehow glimpsed into the future and were saying 'This is too beautiful to last'. Schubert and his poets stand on the threshold of the industrial awakening of the nineteenth century and it is a sobering thought that his was perhaps the last generation in Europe to cast its eyes over a landscape undivided by railway lines and telegraph poles, let alone straddled by power stations and nuclear reactors. It is a world which we can scarcely imagine. Schubert faithfully recorded the beauties of his surroundings in sound photographs taken with a flash of his genius and fixed into immortality not with some poisonous chemical but by a pure stream of melody. Even the most intrepid of musical explorers is unable to trace back the source of this magical river to any place more exotic than the human heart. It was Schubert's rare and noble destiny to make music untouched, against all the odds, by those age-old pollutants disappointment, cynicism and hate. But it was also his luck to have lived in a time and place when nature was near at hand as a cleansing force, a rejuvenating companion, a living text book of how the purity of outdoor creation might be matched by the inner creativity of the pure in heart.