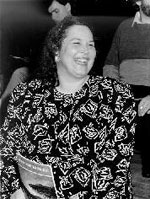 Elizabeth Connell, who died in February 2012, was recognised as one of the world’s leading dramatic sopranos. Following her debut at Wexford Opera Festival in 1972 she sang at the opening of the Sydney Opera House in War and Peace in 1973 and continued to have a special relationship with Opera Australia ever since. Following a five-year association with English National Opera she became a freelance artist with the major opera houses.

In concert her performances included Beethoven’s Ninth Symphony in London with Claudio Abbado, Missa Solemnis in Florence with Carlo Maria Giulini and Mahler’s Eighth Symphony with Maazel, Sinopoli and Boulez. In recital she appeared with Geoffrey Parsons, Graham Johnson, Eugene Asti and Lamar Crowsen in Milan, Geneva, Sydney, Johannesburg and at the Wigmore Hall. She sang Strauss Vier Letzte Lieder with the London Philharmonic Orchestra and Jonathan Nott and with the West Australian Symphony Orchestra under Matthias Bamert.