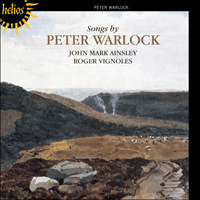 Philip Heseltine was born in London in 1894 and in his short life won public acclaim for the songs he wrote under the pseudonym Peter Warlock. He was particularly noted for his settings of sixteenth- and seventeenth-century texts, and brought the most delicate sensibility of the music of that period to his compositions. Warlock was considered an authority on Elizabethan music and in the course of his life he edited over three hundred Elizabethan and Jacobean lute songs for voice and keyboard or for choir.

Rarely can these works have been so beautifully and movingly performed on record as in this celebrated album, featuring John Mark Ainsley at the peak of his considerable powers, perfectly accompanied by Roger Vignoles.

‘Singer and song are ideally matched, pianist and piano part likewise, and the shade of Philip Heseltine should gain contentment’ (Gramophone)
‘Whether you collect tenors, English music or simply good singing, don't be without this’ (BBC Music Magazine)
‘This is surely one of the best representations of Warlock on records’ (American Record Guide)
‘Enthusiastically recommended’ (Fanfare, USA)

Philip Heseltine was born in London in 1894 and in his short life won public acclaim for the songs he wrote under the pseudonym Peter Warlock. A major biography by Barry Smith was published in 1994 (Peter Warlock—the Life of Philip Heseltine, Oxford) but even with this and the controversial book recently published by the composer’s son (Nigel Heseltine, Capriol for Mother, London, 1992), some details of Warlock’s life remain unclear. His tragic death in 1930, for example, saw an inquest jury return an open verdict on a case of gas poisoning at his home. Undoubtedly he was the composer of some of the finest of all English solo songs, remarkable for their intensity, memorable tunes, and harmonic individuality. The songs number some hundred and twenty and, apart from some very early ones and a few dating from his last years, come from a creative period which, like Caesar’s Gaul, falls into three parts.

In his early years inspiration came from Roger Quilter and Frederick Delius, as can be heard in a song from 1911, The wind from the West. It was when Warlock met Bernard van Dieren in 1916 that his music became more contrapuntal and less—as he once described it—‘clotted and sepulchral’. During the so-called ‘Irish year’ (1917–18), spent largely in Dublin though with a two-month stay on a desolate island in the Atlantic whilst learning Irish, the musical influence of van Dieren combined with his growing confidence so that in August 1918 he wrote ten songs in a fortnight. To the memory of a great singer, As ever I saw, The bayley berith the bell away, and Lullaby, were among those published—under the pseudonym Peter Warlock—in 1918 by Winthrop Rogers. Critical acclaim followed and Warlock’s name was made. Sweet content was one of a later batch of songs published with Winthrop Rogers after the success of the earlier songs.

A common feature of Warlock’s compositional practice was for songs to be issued in more than one musical arrangement. Lullaby and The bayley berith the bell away were first published with piano accompaniment but in 1928, during a lean spell, they were recycled for publication in choral leaflet form, the former for three-part ladies’ voices (SSA), the latter as a duet. Similarly, texts that took Warlock’s fancy were often treated more than once. Apart from the well-known 1918 setting of As ever I saw, there was another the following year, for voice and string quartet, and a 6/8 revision, The fairest May, in 1930. Take, O take those lips away is dated 1918 and is his second setting of the verse. Arnold Dowbiggin, dedicatee of several Warlock songs, related that he once heard four versions of There is a lady; recorded here are the original 1919 song and Passing by, the other surviving setting and the one to use all six verses of the poem. In an arbour green was a further poem which Warlock set three times.

Then came one of the intermissions in Warlock’s compositional life. He spent 1919 to 1921 mainly concerned with journalism. He was editor of The Sackbut, a forthright periodical which was not only a vehicle for Warlock and his friends to present their views on music but which also promoted comparatively unknown music and poetry—by Purcell, van Dieren, Sorabji and Roy Campbell, amongst others. By the mid-1920s Warlock was considered an authority on Elizabethan music and in the course of his life he edited over three hundred Elizabethan and Jacobean lute songs for voice and keyboard or for choir, working with Philip Wilson. Interestingly, these scholarly editions were published under the name Philip Heseltine.

In the autumn of 1921 Warlock returned to his mother’s house in mid-Wales and by early 1923 had written some of his finest songs: Rest, sweet nymphs, Sleep, A sad song, Autumn twilight, and the Two short songs, settings of the Herrick poems I held love’s head and Thou gav’st me leave to kiss. The two Edward Shanks settings, Late summer and The singer, were referred to light-heartedly by the composer as ‘little Peterisms’, the poet as ‘little Shankers’. It is a sign of Warlock’s sense of humour that he issued sets of songs such as Peterisms I, the apt name having been borrowed—perhaps equally aptly, given his lifestyle—from a brewer’s advertisement.

From Wales he returned to Chelsea in 1924. Chelsea was central to Warlock’s life: he had lived there in his youth and returned many times (he lived at more than a dozen addresses in the area). It was also to be the place of his death. In London he was busy visiting publishers, selling the songs and transcriptions, but he also took part in Chelsea’s musical activities, associating with John Goss, John Barbirolli, John Ireland and others.

Yarmouth Fair, dating from 1924, has a strange history. The melody was composed by John Drinkwater, a Norfolk road-mender, to words he had found in an old magazine from 1896. E J Moeran had collected Drinkwater’s tune on one of his folksong expeditions to Norfolk and Warlock then arranged a piano accompaniment to it. Unfortunately, the publishers of the original words refused permission for them to be used and so Warlock’s friend and factotum, Hal Collins, obliged with this new text.

Early in 1925 Warlock, Moeran and Collins moved to a cottage in Eynsford, Kent, and there followed the third prolific period. Writers have tended to exaggerate the roister-doistering side of the Eynsford years. Of course, when friends like Constant Lambert and Lord Berners rolled up, the pub across the road from the cottage would indeed have seen its share of the action, but numerous of his most famous songs were composed at this time, including the Two songs to poems by Arthur Symons—A prayer to St Anthony of Padua and The sick heart—, Pretty ring time, Robin Goodfellow, Jillian of Berry, Fair and true, The lover’s maze, Cradle song, Sigh no more, ladies, and Passing by. The Three Belloc songs (1926)—Ha’nacker Mill, The night, and My own country—were intended to form another set but despite being one of Warlock’s most successful groupings of songs these were eventually published separately. He also wrote many more transcriptions—vocal and instrumental—and the three versions of the popular suite Capriol. The music from the Eynsford years shows the love of (and affinity to) Elizabethan poetry which so characterizes all of Warlock’s work.

After he left Eynsford in autumn 1929, due to ‘a financial catastrophe’, Warlock wrote very little. The contented lover (entitled Celestina in another manuscript, using the name of the Mabbe play) was written in 1929, but most of that year he was occupied in organizing the Delius Festival. An uncle had introduced the young Warlock to Delius in 1910 and they remained lifelong friends. In 1923 he published Frederick Delius, the first full-length book on the composer to be written.

Of the last songs, perhaps the finest were inspired by Bruce Blunt, the journalist and bon viveur. The first reference to any friendship between Blunt and Warlock came in a press report on their being arrested ‘drunk and disorderly’ in Chelsea; how two such reprobates could have produced the work they did remains a mystery. The first mercy was an early result of their collaboration. Originally published as a solo song, it was another piece later to be arranged for choral (SSA) performance, and it was in this form that it enjoyed most popularity.

The Fox must hold some sort of record. Warlock was staying with Blunt in Bramdean, Hampshire, where the local pub was ‘The Fox Inn’. Behind the bar there was a fox’s head. By the time they left one evening this had evidently made quite an impression. Warlock retired to bed, presumably no more thinking that Blunt would write the poem than Blunt would have been expecting to come down the following morning to find the early-rising composer just finishing his job: from conception to completion the song had taken fewer than eighteen hours to compose.

The last few months of Warlock’s life were depressing. The market for songs had dried up. Even The Fox was not taken by a publisher until the sensation of his death in December 1930 aroused more interest than his life had done. One wonders what such impassioned energy and formidable talent would have accomplished had he lived longer. Certainly a further group of Blunt settings were planned. Alas!

1994 saw the centenary of Warlock’s birth and the publication of a book (David Cox and John Bishop (ed), Peter Warlock ‘A Centenary Celebration’, London, 1994) bringing together essays by various authorities, documents relating to his life, and the recollections of many who knew him personally.