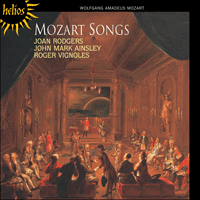 Mozart's songs are surprisingly varied in many ways. Although there isn't a great number of them, they date from all periods of the composer's short life and are widely diverse in character, from simple strophic charmers such as 'Komm, lieber Mai' (Sehnsucht nach dem Frühlinge) to extended and intensely serious utterances such as those he wrote for the Freemasons (Die ihr des unermesslichen Weltalls, from Eine kleine deutsche Kantate). They also vary in language: most are in German but he also set French and Italian texts.

All are represented here, sung by two of Britain's most popular and outstanding singers.

‘This marvellous compilation offers no fewer than 25 Mozart songs which genuinely redress this grossly neglected part of his output. A disc which offers rich rewards’ (The Independent)
‘[An] irresistible disc’ (The Times)
‘Sheer bliss’ (The Sunday Times)

Mozart’s work in the field of song composition spans almost the whole of his short life, beginning with An die Freude, composed in 1768 when he was twelve, and ending with Das Kinderspiel, written in January 1791, the year of his death. Yet commentators have treated this aspect of his output with scant consideration; as just one example, the compendious The Mozart Companion (ed. Landon and Mitchell, with many august contributors) of 1956 fails to include the Lieder in its list of chapter headings.

Though it is probable that Mozart himself set little store by these thirty-odd offerings, to us they show a side of the composer more intimate, more domestic than we normally see. These songs encompass pathos, comedy, homespun piety and heartfelt tenderness, sometimes calling forth from their composer performance instructions that we rarely encounter in his more public works. Die Alte, for example, written in Vienna on 18 May 1787, bears the direction ‘to be sung a little through the nose’, looking forward, perhaps, to the caricaturing of a quack doctor by Despina in Così fan tutte three years later.

Indeed, there is a natural sense of overlap between these miniatures and Mozart’s larger-scale theatrical and religious music, with the self-regardingly pious atmosphere of Catholic Austria tingeing some of the earlier offerings. As an example, An die Freude, written in Vienna at the beginning of December 1768, bears resemblances to the Benedictus of the Waisenhausmesse in C minor (K139) which the twelve-year-old composer premiered before the Imperial Court at the consecration of a new orphanage church in Vienna on the 7th of that month.

An early example of the theatrical influence can be found in the Italian canzonetta Ridente la calma, K152, composed in Salzburg during the summer of 1775, which is anticipatory of zephyrous moments in Idomeneo and Così fan tutte whilst breathing, too, a sense of consolatory resignation.

For all their slightness, some of these Lieder display a surprising degree of complexity, texturally, structurally, harmonically and emotionally. Das Lied der Trennung, one of several songs written during eight days in May 1787, is superficially an exercise in comic tedium, its pathetic tale of a lacerated heart continuing through eighteen verses, the first fifteen strophic, the remainder through-composed (this recording tactfully omits most of the strophes). For all its satire, however, its musical pedigree is of the highest order, evoking the pain of Ilia in Idomeneo, Pamina in Die Zauberflöte, and, in terms of key (F minor) and melancholy gloom, Barbarina in Le Nozze di Figaro. Then it ends like the slow movement of the A major Piano Concerto, K488.

But there is more to this song, and those that surround it, than a mere sense of musical resemblances; much of Mozart, after all, can be discussed in like manner. Three days after its composition Mozart provided a second impressive melodramatic skit, sending up all the opera seria conventions of baroque opera (his admired Handel included) and indeed his own great stage works—Don Giovanni’s Donna Anna and Elvira for starters. The key of this Als Luise die Briefe is a stormy C minor, pointing to a connection with the equally turbulent piano Fantasie of a couple of years earlier.

Here, though, the high-handed grand manner is firmly tongue-in-cheek, and the clue for all this mock pomposity lies in the ‘Luise’ of the title. The object of the lovelorn poet’s despair in Das Lied der Trennung is also a Luise, and one’s thoughts fly immediately to the great love of Mozart’s life, coloratura soprano Aloysia Weber, who built up his hopes as he sojourned at Mannheim on his way to Paris in 1777 and then broke his heart in Munich on his return journey to Salzburg in 1778.

By 1787 she was his sister-in-law (Mozart had married her younger sister Constanze on one of the most successful rebounds in history) and wife of the actor Joseph ‘Max’ Lange. For a while the four enjoyed a friendly and artistically rewarding relationship (Lange painted one of the best surviving portraits of his brother-in-law), but by 1787 Aloysia and Lange’s marriage was crumbling, and she had begun to call herself ‘Luise’. One can only guess at the subtext behind these songs: teasing? jokily-concealed continued passion? compassion for her situation? Matters are further complicated by the fact that ‘Aloysia’ was also one of Constanze’s given names, though only the sixth!

Another subject-matter grouping comes with songs written in January 1791, the last genuine Lieder from Mozart’s pen. Both of them composed on 14th of that month, Sehnsucht nach dem Frühlinge and Im Frühlingsanfang look forward yearningly to spring, the month of May in particular. The first of these is remarkably ‘folky’ for Mozart, its melody borrowed from Telemann’s The Seasons cantata, where the soprano sings ‘Ich sah den jungen Mai’. Mozart’s words begin ‘Komm, lieber Mai’. The melodic resemblance, too, to the finale of his last Piano Concerto, No 27 in B flat completed on 5 January, will not go unnoticed.

Also from 14 January we find yet a third song, Das Kinderspiel, with its innocent air of childish play amid nature’s green fields. Its delightful waltz-rhythm is directed to be rendered ‘munter’ (‘cheerfully’) and its key of A major was always one of Mozart’s favourites (as was the diametrically opposed E flat major of Im Frühlingsanfang).

Childish matters figure elsewhere in Mozart’s song output, two items being written for inclusion in periodicals aimed at the young. Des kleinen Friedrichs Geburtstag, composed for the birthday of a youthful minor aristocrat (‘Am Geburtstag des fritzes [sic]’ wrote Mozart in his own thematic catalogue) appeared in Neue Kinderbibliothek (New Children’s Library), and Die kleine Spinnerin, its moralistic words also referring to a young Fritz, was published in a biannual supplement to Wochenblatt für Kinder zur angenehmen und lehrreichen Beschäftigung in ihren Freystunden (Weekly newspaper for children, for the pleasant and instructive occupation of their leisure hours).

A charming instance of Mozart’s own delight in simple things is the unaffected sentimentality of Das Veilchen, with its sad tale of the violet crushed to death by the foot of the shepherdess whose bosom it longed to adorn. The story anticipates Hans Christian Andersen’s The Daisy; the poet here is the only author whose name Mozart set at the top of the manuscript of any of his songs, and though it was none other than the great Goethe, Mozart was still sufficiently unabashed to add his own tailpiece to the song: ‘The poor violet! It was a pretty violet.’ Mozart showed similar empathy with one of Nature’s creatures when he notated the song of his pet starling, commenting ‘Das war schön!’ (‘That was pretty’), in preparation for using it in the finale of his G major Piano Concerto, K453, of 1784. Das Veilchen, written a year later, shares the same key and duple time signature.

Several of Mozart’s songs bear Masonic implications. The earliest, Auf die feierlicher Johannisloge, is actually a reworking of a Salzburg composition of 1772 (An die Freundschaft) with new words and an added choral refrain; this recording is of the original version with its theme of friendship. Others of a Masonic nature are omitted from this collection, though the final offering here, the imposing Clemenza di Tito-like Die ihr des unermesslichen Weltalls (Vienna, July 1791) is the first section of a six-movement cantata obviously destined for Masonic use, and the bloke-ish Lied der Freiheit (text by a Viennese satirist) possibly has a more dignified subtext than its theme of anti-feminist male bonding might suggest.

Ridente la calma aside, Mozart’s Lieder are almost all in German; the exceptions are two deliciously Watteau-esque French ariettes written under the influence of his crucial expedition to Paris in the years 1777 to 1779 and composed for Augusta Wendling (Mlle Gustel), daughter of the great Mannheim flautist Johann Baptist Wendling. As Wolfgang wheedlingly wrote to his disapproving and impatient father back home: ‘Mlle Gustel … gave me the words; and she sings it incomparably well. I have the honour to enclose it to you. At Wendlings it is sung every day for they are positively crazy about it’ (Emily Anderson’s translation, pub. Macmillan).

Two little songs with mandolin accompaniment date from soon after this time, also as a result of contacts Mozart made during his travels through southern Germany, this one being a Munich mandolin player called Lang. Despite some doubt as to their authenticity, one is included here, and though Komm, liebe Zither is given with an alternative piano accompaniment, Don Giovanni’s mandolin-accompanied Deh vieni alla finestra is never very far away.

As for the piano accompaniments themselves, they range from the most rudimentary unfigured bass lines, the player free to extemporize his own right-hand part (An die Freude, Die Alte), through to highly sophisticated, richly textured partnerships. Among the latter category can be found the spooky histrionics of Der Zauberer, the serenade Das Traumbild, the tender warmth of An Chloe (Mozart here using some of his favourite thematic devices) and the quietly contained pulsations of Abendempfindung, a song whose ultimate ineffable serenity leaves an impression worthy of masterpieces by other composers better known for their aptitude in the area of Lieder composition.