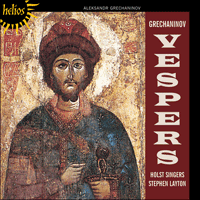 Grechaninov was initially taught by Anton Arensky in Moscow, and then later, in 1890, he went to St Petersburg to study with Rimsky-Korsakov. It was he who influenced his style and helped him launch his professional career. After the Revolution, Grechaninov became increasingly uneasy in Soviet Russia, and in 1925 left for ever. In 1946 he took American citizenship.

An unusually versatile and prolific composer, he wrote operas, symphonies, chamber music, over 250 songs, and a great deal of music for children. He has been described as the most representative composer of his generation writing for the Orthodox service.

Vespers is part of the All-Night Vigil service, and Grechaninov's setting was composed, premiered, and published in 1912. This precedes Rachmaninov's setting by three years. It appears to have lain dormant for some eighty years until it was revived in America for its first performance of modern times in 1995.

‘Numerous delights. The performance by the Holst Singers is stunningly good. This serene, delectable music is irresistible and so is its performance’ (Choir & Organ)
‘Really something of a triumph’ (The Penguin Guide to Compact Discs)
‘Two highly attractive and unstuffy Russian liturgical works in attractive performances’ (Classic CD)
‘Great blocks of beautifully contructed sound are stunning in their apparent simplicity’ (The Scotsman)
‘This recording brings a sense of deep spiritual peace and will especially appeal to those who already know the beauties of the Russian liturgical tradition’ (Contemporary Review)

Aleksandr Tikhonovich Grechaninov is an original and colourful figure in the history of Russian music at the end of the nineteenth and the first half of the twentieth century. The grandson of a peasant from Kaluga and son of a Moscow trader, Aleksandr Tikhonovich died in New York in 1956 at the age of ninety-two. Gifted not only with a rare longevity, but also with a remarkable capacity for work, he left Russia in 1925 at the age of sixty when everything in his artistic make-up was already formed. He proved to be a ‘late’, slowly developing artist, and in his declining years was still developing. For example, at the age of seventy he turned for the first time to the Mass and the motet with their Latin texts, composing some superb works which were successful at a competition of Catholic composers in Paris, and his first Mass, the Missa festiva, was performed during divine service at Notre Dame in 1934. At the age of eighty, when he was already in America, and after an interval of almost fifty years, he wrote his third opera, The Marriage, after Gogol. One of his greatest achievements during this period was the Missa oecumenica (‘Universal Mass’) for soloists, chorus, organ and orchestra.

Grechaninov composed a great deal in almost all of the traditional genres. In addition to The Marriage, his output includes two other operas—Dobrynya Nikitich and Sister Beatrice (after Maeterlinck), a charming example of the Russian ‘modern style’. In addition there are three children’s operas, five symphonies, symphonic poems, numerous chamber works, a large number of choruses, choral cycles, hundreds of romances, children’s pieces, piano pieces and folksong arrangements. However, the most important works which Grechaninov composed are associated with the Church, above all the Russian Orthodox Church. In the first two decades of the century, along with Aleksandr Dmitriyevich Kastalsky, he headed the so-called ‘New Trend’ in Russian spiritual music, writing four liturgies, the ‘All-Night Vigil’, Op 59 (recorded on this CD), Strastnaya Sed’mitsa (The Seven Days of Passion) and many separate sacred choruses. His music for the Orthodox Church was performed not only in Russian churches, but also those in France, Belgium and America. In Russia too it is now extensively performed.

The ‘All-Night Vigil’ is perhaps the most recent of the musical genres of the Orthodox divine service. Its history can be traced back little more than a hundred years (although individual canticles had been set to music many times before). It was Tchaikovsky who introduced the ‘Vigil’ as a choral cycle in 1881, and the form which he created became a model for composers of the following generations—for example Kastalsky, Nikolsky, Ippolitov-Ivanov and Panchenko. Undoubtably the best-known setting of the ‘Vigil’ is that by Rachmaninov, composed in 1915. An immediate precursor of that masterpiece is Grechaninov’s.

Grechaninov’s Vsenoshchnoye bdeniye was written during 1912 and first performed in Moscow on 18 November 1912 by the famous Synod Choir under the direction of Nikolay Golovanov. The premiere was not wholly successful. It scored only a moderate success and did not find a home for itself in the repertoire of the Synod Choir (apart from the premiere, the chorus sang it only once in December that year), nor was it included in the repertoires of other famous choirs of the pre-Revolutionary period. Censorship prevented its performance in the Soviet period, and even now Russian choirs do not sing it. Nevertheless this is undoubtedly vivid, bold music intended for concert as well as liturgical performance.

The ‘Vigil’ is written on a grand scale in a style that is essentially epic. The central movements in the cycle are psalms of ‘glorification’: Blagoslovi, dushe moya (Bless the Lord, O my soul), Blazhen muzh (Blessed is the man) for double chorus, and the monumental and the heroic-sounding Hvalite imia Ghospodne (Praise the name of the Lord). The cycle concludes with a remarkably colourful ‘bell’ finale to the text of the canticle glorifying the mother of God, Vzbrannoy voyevode (To thee, victorious leader). Grechaninov does not quote literally a single traditional chant, but freely combines elements (popevki) of them. Thus, in Bless the Lord, O my soul we hear the intonations of Greek chant; in Blessed is the man we hear chant from the Kiev Pechersky Monastery; in Ot yunosti moyeya (From my youth) and Voskreseniye Hristovo videvshe (Having beheld the resurrection of Christ), elements of znamennïy chant.

Grechaninov’s ‘Vigil’ is exclusively and absolutely major in tone with barely any departures into minor keys. Even the major keys are ‘noble’, brilliant ones: E major, B major, F sharp major, C sharp major. For the most part the texture is rich and intensive with numerous divisi in the choral parts, often for two choruses. The work, of course, relied on the vocal abilities of the Synod Choir with its resonant boy sopranos and low basses. As we have remarked already, the character of the work inclines us to suppose that it was intended for concert performance, but we cannot rule out the fact that in the course of composition the composer imagined hearing his ‘All-Night Vigil’ sung during the service at the ancient Uspensky Cathedral in the Moscow Kremlin, for it was there that the Synod Choir sang for the services on Sundays and festival days. In any case, Grechaninov’s ‘Vigil’ has a vividly expressed ‘heroic’ and ‘archaic’ colouring. A certain contrast is provided by the chant Bogoroditse Devo (Rejoice, O virgin), written in the form of a lyrical miniature with a soft, swaying motion (the form here recalls the corresponding part of Rachmaninov’s setting), and also by the tropars for the Resurrection, Blagosloven yesi, Ghospodi (Blessed art thou, O Lord). This section imitates the so-called ‘ordinary’ chant, and includes a particularly expressive and beautiful alternation of the quartet of children’s voices (sopranos and altos) in the stanzas, with tutti in the pripevki (refrains); the deliberate simplicity of the harmony is elegantly set off against cadences in the folk manner. The grandest part of the cycle is the Slava v vïshnih Bogu (Glory be to God), where choral recitative alternates with solo fragments in the style of liturgical reading. The movement towards the climax at the words ‘vo svete Tvoyem uzrim svet’ (In thy light shall we see light) is constructed in a remarkable way; the melody of the old Russian fita (‘jubilation’) resounds triumphantly. Of great interest and novelty in the context of Russian sacred music of the early twentieth century are parts of the Hvalite imia Ghospodne and Vzbrannoy voyevode, in which the imitation of bells and the resonance so typical of the entire work are expressed with a grandiose sweep (the Hvalite also stands out for its characteristic use of fourths in the melody and harmony that recalls the style of Borodin, especially the choruses in the Prologue to Prince Igor).

It is interesting to compare Grechaninov’s ‘All-Night Vigil’ with Rachmaninov’s, written three years later and performed in Moscow by the same Synod Choir. In terms of the overall form of the cycle the artistic treatment of the two works is quite different. We do not know whether Rachmaninov heard Grechaninov’s setting. Most likely he may have glanced through the score, and, of course, he knew other sacred works by Grechaninov, especially those in the repertoire of the Synod Choir. Grechaninov, though, was present at one of the early performances of Rachmaninov’s ‘Vigil’, and summed up the style with the words ‘true church music’. In any case, these two ‘All-Night Vigils’, alongside two more large-scale choral works for the Orthodox Church, Strastnaya Sed’mitsa by Grechaninov (1912) and the Bratskoye pominoveniye (Prayer in memory of our dead brothers) by Kastalsky (1916) are, as it were, a summing-up of the brilliant development of Russian church music from the 1880s to Russia’s watershed year, 1917.

Now the powers of heaven, Op 58 No 6, is from the Strastnaya Sed’mitsa cycle. The first three sections of the hymn are sung slowly as the clergy form the solemn procession of the Great Entrance, during which the Holy Gifts are transferred from the Table of Oblation to the altar. Also part of Strastnaya Sed’mitsa, In thy kingdom, Op 58 No 3, is a setting for alto and choir of the Beatitudes from the New Testament. The musical style is similar to Grechaninov’s famous setting of the Creed in its juxtaposition of alto and choir. Nunc dimittis, Op 34 No 1, the Song of Simeon from the Vespers, shows Grechaninov at his best.