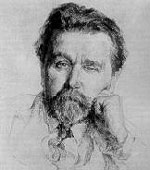 born: 25 October 1864
died: 1956
country: Russia
Aleksandr Tikhonovich Grechaninov is an original and colourful figure in the history of Russian music at the end of the nineteenth and the first half of the twentieth century. The grandson of a peasant from Kaluga and son of a Moscow trader, Aleksandr Tikhonovich died in New York in 1956 at the age of ninety-two. Gifted not only with a rare longevity, but also with a remarkable capacity for work, he left Russia in 1925 at the age of sixty when everything in his artistic make-up was already formed. He proved to be a ‘late’, slowly developing artist, and in his declining years was still developing. For example, at the age of seventy he turned for the first time to the Mass and the motet with their Latin texts, composing some superb works which were successful at a competition of Catholic composers in Paris, and his first Mass, the Missa festiva, was performed during divine service at Notre Dame in 1934. At the age of eighty, when he was already in America, and after an interval of almost fifty years, he wrote his third opera, The Marriage, after Gogol. One of his greatest achievements during this period was the Missa oecumenica (‘Universal Mass’) for soloists, chorus, organ and orchestra.

Grechaninov composed a great deal in almost all of the traditional genres. In addition to The Marriage, his output includes two other operas—Dobrynya Nikitich and Sister Beatrice (after Maeterlinck), a charming example of the Russian ‘modern style’. In addition there are three children’s operas, five symphonies, symphonic poems, numerous chamber works, a large number of choruses, choral cycles, hundreds of romances, children’s pieces, piano pieces and folksong arrangements. However, the most important works which Grechaninov composed are associated with the Church, above all the Russian Orthodox Church. In the first two decades of the century, along with Aleksandr Dmitriyevich Kastalsky, he headed the so-called ‘New Trend’ in Russian spiritual music, writing four liturgies, the ‘All-Night Vigil’, Op 59, Strastnaya Sed’mitsa (The Seven Days of Passion) and many separate sacred choruses. His music for the Orthodox Church was performed not only in Russian churches, but also those in France, Belgium and America. In Russia too it is now extensively performed.