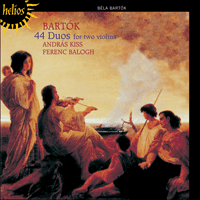 A map of Hungary today shows a country barely one third of the area it was when Béla Bartók was born on 25 March 1883. In 1919/20 the once-powerful Hungarian nation, part of the defeated Austro-Hungarian Empire which sided with Germany during the Great War, was forced to cede much of its land to Austria and Rumania and to the new states of Czechoslovakia and Yugoslavia. Amongst these lost lands, some of which had been Hungarian for half a millennium and more, was Bartók’s birthplace Nagyszentmiklos, situated in the prosperous Torontál region which, abundant with cornfields and grazing pastures, ranges from the eastern Carparthian mountains to the Danube. Had Bartók been born forty years later, we would regard him as a Rumanian composer.

The nationalist background is important for, from about 1905/6, Bartók found himself in the vanguard of a group of young musicians inspired by the ideal of collecting and preserving the folk music of Hungary’s various regions from the threat posed to it by industrialization. Hungarian history shows many influences, long absorbed into the national strain, including Genghis Khan’s Mongols who reached the Carpathians in 1241. The Mongolian ancestry, with distinctive high cheekbones, can be seen in Hungarian stock today.

Bartók found the inimitable features of Hungarian folk music, unique in its fusion of European and Oriental strains, a rich fund of inspiration and a natural liberating force from the prevailing Germanic domination of music. His earliest compositions inhabit the high-Romanticism of Liszt, Wagner and Richard Strauss; a later Impressionist influence was ultimately transmuted, by way of his absorption of folk music, into a distinctive mature style.

The arrival of Bartók’s maturity took many years; indeed, with such a great musician of integrity, the compositional synthesis he achieved could hardly have occurred earlier. It was a synthesis he neither taught nor wrote about, and has only begun to be fully understood in recent times. Those who concentrate on his concert and theatre music may overlook his profound research into folk music: coincidentally with being a great composer Bartók was one of the century’s great ethno-musicologists. To his search for a personal compositional synthesis he found folk music to be ‘a phenomenon of nature. Its formations developed as spontaneously as other living natural organisms: flowers, animals, etc’—thus his 1925 essay, The Sources of Folk Music. This was no rose-tinted view of folk music, for Bartók was to take a series of Fibonacci numbers, a Golden Section sequence found in all organic matter, as a basis on which to evolve his compositional synthesis, which reached its zenith in the masterpieces of his final years.

His career was marked by periods during which he wrote hardly any original concert music; 1913–15, 1923–26, and 1931–34. During these years Bartók devoted himself to folk music stylizations and arrangements. Nor can one ignore his remarkable contribution to educational music, to music for young people and those beginning to learn an instrument. His interest in writing music for education stems from the first decade of the century, and reached its finest expression in the six volumes for piano Mikrokosmos (153 pieces, graded according to difficulty), composed between 1926 and 1939. For Children (85 pieces, 1908/9) and The First Term at the Piano (1913) are also notable, the latter set of very easy pieces, which use folk material, being composed for the piano method of Sándor Reschofsky. These earlier volumes were much in demand by more progressive teachers, amongst whom was the distinguished German musicologist Erich Döflein, who had had been impressed by the effectiveness of Reschofsky’s piano method in the years following his appointment as teacher at Freiburg-im-Breisgau in 1924.

In 1931 Döflein wrote to Bartók, inviting him to contribute an easy duet for unaccompanied violins for a beginner’s manual—similar to Reschofsky’s method—which Döflein and his wife had written on violin playing. Bartók readily agreed and sent Döflein what became the last of his 44 Duos for two violins. The piece, ‘Transylvanian Dance’, was more difficult than Döflein had in mind, so he asked Bartók for some easier ones. Again, Bartók responded, but again Döflein found them more difficult than he had hoped for; and so, each week, Bartók supplied easier pieces until the collection (of what was eventually published in two books in 1933 by Universal Edition as 44 Duos—seven appeared from Schott in 1932) was completed. Strictly speaking, there are 46 duets, for No 4 has an alternate second violin part which contains different harmonies to the other version, and No 36 is followed by a variant. In fact, Bartók composed 47 violin duets if one also includes his Duo for two violins in canon form of 1902.

Bartók’s 44 Duos are little known, yet have an importance way beyond what might at first be thought; the Duos appeared immediately after the second piano concerto, a work which is both a compendium of his earlier periods and which heralds the beginning of his late, greatest period. The Duos’ epigrammatic character stands in utter contrast to the powerful Cantata Profana (1930), the second concerto and his next major composition, the String Quartet No 5 (1934). Bartók’s works immediately following the Duos were all folk-transcriptions or settings of no great significance.

Although composed originally as teaching pieces, Bartók envisaged concert performance of the 44 Duos (they were first heard publicly in part, in January 1932 in Budapest); a note at the head of the score invites performances of selections as a group, or in several groups. As published, they fall into four volumes, two to a book: Book 1 (Vol 1, 1–14, Vol 2, 15–25); Book 2 (Vol 3, 26–36 with variant, Vol 4, 37–44). Aside from two, each Duo is based on a peasant melody. In 1936, Bartók transcribed six of them (in order, Nos 28, 32, 38, 43, 16 and 36) as his Petite Suite for piano solo. Editions of the Duos, whole or in part, have been prepared by William Primrose (for two violas), and for other instrumental pairs.

The material of the 44 Duos is drawn from a wide—virtually exclusively central European—geographical range. Volume 1 covers the area of the old Hungary (No 10, ‘Ruthenian Song’, refers to the central Carpathian area now split between eastern Czechoslovakia, Poland, Rumania and the Ukrainian Republic), and in character suggests a lyrical rural summer. No 4 has an easier second violin part as an alternative, but the harmony thus provided is quite different, ending for example on E natural, whereas the preferred part ends on E sharp (concluding the ‘Song’ with an augmented fourth). Volume 2 is a sturdier set of pieces seemingly looking more towards Russia (No 16 is based on a Ukrainian song, not so titled by Bartók; the first pizzicato in the Duos is heard here), the sturdiness exemplified by three military pieces—the first, No 15 ‘Soldier’s Song’, may remind some listeners of ‘The Little Concert’ in Stravinsky’s The Soldier’s Tale (Stravinsky said the phrase came to him in a dream of a gypsy violinist, but the folk ethos of both pieces cannot be gainsaid). No 21, ‘New Year’s Song’, has the instruments playing con sordino in turn, the ‘Song’ being a swaying tune whose harmonic ambivalence is finally resolved by an unusual second inversion of C sharp major. And No 22 bears a strong resemblance to the Caucasian folk theme with which Miaskovsky began his ninth string quartet.

The character of Volume 3 has more passion overall; No 26 ‘Teasing Song’ recalls the ‘Wet Nurses’s Dance’ from Stravinsky’s Petrushka, an aspect also hinted at in the succeeding Duo. Volume 3 ends with two original themes, Nos 35 and 36—without this knowledge, one would never guess they were not pure folk themes—and ‘The Bagpipe’ is, as has been mentioned earlier, in effect two Duos, a theme (in two parts, each repeated) and variation (similarly constructed). We also hear phrases more common to Bartók’s last period in this Volume, ideas which resurfaced in the fifth quartet, Music for Strings, Percussion and Celeste and the Divertimento.

The final Volume contains three abstract Duos, Nos 37 (the longest, a ‘Prelude and Canon’), 41 (‘Scherzo’) and 43 (‘Pizzicato’—the only fully pizzicato piece in the entire set). The little three-note ostinato in No 42, ‘Arabian Song’, might strike some listeners as being equally Armenian in contour (in its recollection of Khachaturian). This ‘Song’ also has the only use of the ‘Bartók-pizzicato’ in the work. As we noted the final ‘Transylvanian Dance’ was the first Duo to be composed. Bartók sometimes wrote differing key signatures for the two violins, and occasionally utilized unconventional key signatures. In February 1945, a few months before his death, Bartók sketched a cycle of Ukrainian Folksongs for Pál Kecskeméti; he completed only one, ‘The Husband’s Grief’, a variant of the Duo No 24.

Notwithstanding the prefatory note to the score, suggesting concert performance of the Duos in selected groups, there are strong reasons for hearing them as a complete set. Their graduated technical difficulty, as the four Volumes progress, produces a growing tension and increase in concentration, leading one on to the next piece. The published groupings were also chosen by the composer himself, and we must assume that Bartók had strong reasons for selecting their final order. As we have seen, each Volume exhibits an overall character which is lost when Duos are played separately. In addition, the Duos’ total playing time does not stretch a listener’s attention, made keener by the quite astonishing range of texture and timbre, of rhythmic vitality and subtlety, of harmonic language and of melodic contour—all expressed within the necessarily restricted demands of the technical aspect being addressed—which Bartók extracts from his two unaccompanied instruments.

Each of these admirable characteristics makes Bartók’s 44 Duos a highly fascinating set of pieces, whose cumulative effect is far greater than the work’s incidental attractions—on many levels. One can but agree with Serge Moreux who said in 1949 of Bartók’s 44 Duos that without a detailed knowledge of this work, ‘it is impossible to get very far in the analysis of Bartók’s larger compositions’. To which one should add that ‘analysis’ in this context equals ‘understanding’.