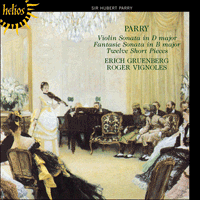 ‘In the front rank of late 19th- and early 20th-century chamber music and richly deserving of recognition’ (The Daily Telegraph)
‘This disc will be welcomed by anyone with a taste for the unfamiliar, and will certainly reward the curiosity of the adventurous collector. Warmly recommended’ (The Good CD Guide)
‘Very highly recommended’ (Classic CD)
‘Parry has his own distinction; witness the winsome and ardent D major Sonata―lovely in its melodies and heartfelt in emotions―and the Fantasie Sonata traces a rich vein of lyricism. The Pieces are each engaging and pleasing. The splendid performances are naturally recorded’ (Classical Source)

Writing enthusiastically in 1878 for The Musical Times a critic claimed: ‘There are probably no concerts given in London at which so many novelties are to be heard as at these performances.’ He was referring to the annual series of chamber concerts given at 12 Orme Square, home of the celebrated pianist and teacher Edward Dannreuther, who had settled in England in 1863, having studied under Moscheles and Hauptmann in Leipzig. As a pianist, Dannreuther had introduced the concertos of Chopin (in F minor), Liszt (in A), Grieg and Tchaikovsky to English audiences; as a teacher his veneration of the classics (especially Bach and Beethoven) was combined with an appetite for contemporary music, notably Brahms, Liszt and Wagner. Indeed, his championship of Wagner led to the founding of The Wagner Society in 1872 and the subsequent Wagner Concerts at the Albert Hall in 1877. Hubert Parry, who became a member of The Wagner Society, began lessons with Dannreuther in both composition and the piano in November 1873, while making a living in insurance at Lloyd’s. At the age of twenty-five, Parry’s musical horizons were still limited to the undistinguished Mendelssohnian style of his earlier years at Eton and Oxford, in small-scale works such as songs, anthems and piano music. He had yet to confront modern techniques of harmony and structure on a larger canvas, so that Dannreuther, recognizing his pupil’s needs, sought rigorously to remedy these deficiencies. Not until 1875 did Parry begin to write anything substantial, and this was to be chiefly in the form of concerted chamber music.

The first such work to be completed was the Grosses Duo in E minor for two pianos (1875, though not performed until 1878), and this was followed by the Piano Sonata in A (1876) and the Piano Trio in E minor (1877). The style of these works reflects Parry’s subjection to the intellectualism exemplified in the chamber works of Brahms, particularly those of the composer’s early maturity, since Parry had come to know these well during the years 1873–6. Expansive forms, third-related keys and intensive motivic integration, as one finds in the Piano Quartets Opp 25 and 26, the Piano Quintet Op 34 and the two Sextets Opp 18 and 36, are essayed with remarkable assurance. In their performances, Parry was able to take full advantage of his teacher’s notoriety in that the Orme Square Concerts ensured him a platform with some of the best performers of the day, as well as providing an ideal environment where he could measure his achievements with other new music.

The Fantasie Sonata—‘in einem Satz in H-Dur für Violine und Clavier’, unashamedly betraying its Teutonic roots—belongs to the feverishly prolific year of 1878 in which Parry completed a String Quartet in G, the Variations for piano in D minor, the overture Guillem de Cabestanh, and the sketches for the first movement of the Piano Concerto in F sharp (recorded on Hyperion CDA66820). Moreover, along with the Nonet for Wind (1877, available on Helios CDH55061), the Sonata marks the peak of Parry’s interest in the cyclic innovations of Schumann and Liszt. His sympathetic comments in the ‘Sonata’ article for the first edition of Grove’s Dictionary of Music and Musicians are evidence enough of his indebtedness to Schumann’s F sharp minor Sonata, Op 11, and Liszt’s B minor Sonata.

However, although these influences are clear from the one-movement form and the emphasis on thematic transformation, the internal organization is highly original. The opening, marked Allegro quasi maestoso, introduces a long, registrally expansive theme which provides the basic material for the rest of the work. This broad melody is then reiterated in a more tranquil mood for the second group in A flat, but is soon curtailed by a move to the dominant of F minor in preparation for the development. Yet instead of being tonally exploratory, the development is firmly orientated around F minor, and by its significant increase in tempo (Più moto), represents a type of self-contained, illusory Scherzo movement. A recapitulation of the opening ideas is interrupted by a slow movement in E minor. This is perhaps the most inspired section of the work, both in its highly imaginative use of sonata form and in the way the brooding nature of the first subject (derived from the opening theme) contrasts with the almost ethereal lyricism of the second. Also impressive is the central climax, deeply moving with its powerful sequence of suspensions, and sounding peculiarly Elgarian though predating that composer by well over a decade. Finally, a second, fuller recapitulation brings the work to a conclusion, incorporating in true Lisztian fashion a memory of the slow movement just before the coda.

It is evident from Parry’s diaries that the Fantasie Sonata was composed at great speed in a mere eleven days, during a period when Parry was able to work without distraction. He had by now given up working at Lloyd’s (since 1877) and was therefore able to devote most of his time to composition. He frequently visited Dannreuther who expressed his approval of the Sonata, particularly the slow movement. After a number of revisions it was performed at Orme Square (with Dannreuther and Holmes) on 30 January 1879. This was to be its only public hearing. After playing through the Sonata privately with Joachim on 25 March, Parry shelved it and the work has remained unpublished. It is not clear whether this was the result of personal dissatisfaction, or of adverse criticism from some performers whose scathing remarks Parry all too often took to heart. One entry of 23 March 1879 relates how one violinist, Straus, did not like either the Fantasie or the String Quartet because ‘there [were] not enough cadences in them, and too many keys!!’ In these early years of creativity, Parry often had to come to terms with disappointment. In the Fantasie Sonata Parry had, rather adventurously for his time, combined Brahmsian homogeneity with the progressive formal ideas of Liszt—both composers were still considered modern in the eyes of an English musical pedagogy which still idolized Mendelssohn as the epitome of compositional excellence. Furthermore, cyclic chamber works were still an uncommon phenomenon on the European mainland; Parry’s Sonata challenges the well-established chronology of cyclic forms in that it occurs some years before such works became fashionable (as in the works of Franck, Dukas, d’Indy, Fauré and Saint-Saëns). Seen in this perspective, it is perhaps not surprising that the work’s reception was so cool.

The Sonata in D major was begun in December 1888 and first peformed at Orme Square on 14 February 1889 (both this Sonata and the later Piano Trio in G of 1890 were specially composed for Dannreuther’s concerts). At this time Parry’s national reputation had only just become firmly established through the success of Blest Pair of Sirens in 1887. Indeed, during the Sonata’s rather frenetic composition he was also preoccupied with sketches for the Ode to St Cecilia and the Third Symphony, both commissioned for performance in the summer of 1889. In layout it is far more conventional than the Fantasie Sonata, conforming to the traditional three-movement scheme. But in terms of structural balance, harmonic and thematic consistency, and instrumental interplay, it is considerably more assured. At once we are aware of the striking rhythmical flexibility of the first movement’s opening theme on the violin, particularly the falling seventh at the end of its first phrase. Also conspicuous is Parry’s mature diatonic style, evident in the closing material of the exposition. The slow movement, in B flat major, is almost entirely lyrical in content. Its long opening theme recalls earlier impressive slow movements in the Cello Sonata (1880) and Second Symphony (1883), while the beautifully constructed second-group melody is one of Parry’s most inspired thematic inventions. The brilliant finale, revealing Parry in a delicate mood, appears from Parry’s diaries to have been written first. In February 1894, when the Sonata was subject to revision, this movement remained virtually untouched. However, the first movement, which contains perhaps the most interesting and thoroughly integrated material, was obviously the cause of some uneasiness since he devoted nearly all his revision time to its perfection.

The Twelve Short Pieces for violin and piano were composed at the end of October 1894, at the request of Novello, and were dedicated to the composer’s wife Maude (sister of the 13th Earl of Pembroke) and his two daughters, Dorothea (Dolly) and Gwen, with the exception of the first piece, Idyll, which was dedicated to his good friend Kitty Maxse (formerly Kitty Lushington). The pieces were published in 1895 in three sets, and though there is not much documentary evidence about them, it seems likely they were commissioned to serve violinists of a more limited technical proficiency. Most of these delightful miniatures form neat ternary structures resembling earlier small-scale movements found in works such as the Partita for violin and piano (first peformed 1886) and the Lady Radnor Suite (1894). Some pieces are decidedly reminiscent of other composers, the Romance from Set 1 and Capriccio from Set 2 are successful pastiches of Dvorák, and movements such as the Romance from Set 2 show an indebtedness to Schumann. Several pieces contain melodic strands that anticipate future works. The opening melody of Envoi (Set 2) looks forward in a rather restrained manner to the much livelier setting of Rossetti’s ‘My heart is like a singing bird’ (English Lyrics, Set 10, 1909), and the delicate little Preamble (Set 3) has many turns of phrase that Parry used later in his song ‘On a time the amorous Silvy’ (English Lyrics, Set 7, 1907), especially the amusing switch to the flat side towards the end. Last but not least the charming Lullaby (Set 1) contains material in its central section that is virtually identical with the same section in the Sarabande of Parry’s much later English Suite for strings, published posthumously in 1921.