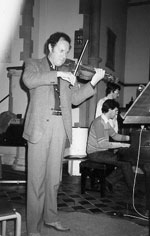 Erich Gruenberg, one of Britain's most distinguished and musically wide ranging violinists, started his musical education in his native city of Vienna, continued his studies at the Jerusalem Conservatoire and came to the United Kingdom at the age of twenty two, winning the Carl Flesch International Violin Competition which launched him on an international career. Since then he has made his home in London.

Erich's repertoire is extensive and his name is associated with an active advocacy of contemporary works. He has commissioned many new works from Britain and abroad and has given many World-Premiere performances.

Erich was chairman of the Jury and Artistic Panel of the 1998 Yehudi Menuhin International Competition for young violinists in France. He is also chairman of the Hattori Trust Fund. More recently, he formed the Erich Gruenberg String Soloists Ensemble with whom he made an auspicious debut in London.

In recognition of his continuing services to music, Erich was awarded an OBE in 1994.