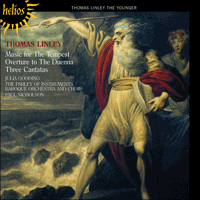 ‘An outstanding disc in a trail-blazing series: highly recommended’ (BBC Music Magazine)
‘The irresistible music will compel you to acquire this recording’ (Early Music Review)
‘All parties sound as if they love every moment of this absorbing and enjoyable programme’ (American Record Guide)
‘I completely missed this 1994 release which makes the last 13 years somewhat poorer as a result! … this collection of cantatas and theater music is simply stunning—rarely do we hear a composer of that age who even comes close to what Mozart was doing, but if any can make that claim, Linley certainly can … the freshness and invention—will strike you over and over … these period performances are sterling in concept and execution, and Hyperion’s midprice Helios label makes them almost irresistible’ (Audiophile)
«Le programme est d'une parfaite cohérence et magistralement interprété» (Répertoire, France)
«Le programme est d'une parfaite cohérence et magistralement interpreté» (Répertoire, France)
«Il y a longtemps que le disque ne nous avait révélé un talent méconnu aussi brillant et attachant» (Diapason, France)

Thomas Linley was born in Bath on 7 May 1756, the son of a harpsichordist, composer and singing teacher. Thomas Linley senior played a prominent role in Bath’s musical life and introduced members of his prodigiously talented family to the public at an early age. Elizabeth Ann (b1754), Mary (b1758) and Maria (b1763) were accomplished singers and actresses in their early teens, while Samuel (b1760) was a talented oboist before becoming a sailor. Thomas junior was playing violin concertos at the age of seven and was an experienced composer before he went to Italy to study with Nardini (where he met Mozart, his exact contemporary). Thomas returned to England in 1771 and quickly became a leading figure in London’s musical life, helped by his father’s appointments as leader of the Drury Lane orchestra (1773) and musical director of the theatre (1774).

Thomas junior wrote some remarkable music over the next few years, including a large-scale orchestral anthem for the Three Choirs Festival, the oratorio The Song of Moses, the Lyric Ode on the Fairies, Aerial Beings and Witches of Shakespeare (available on Helios CDH55253), and music for Sheridan’s play The Duenna. Not surprisingly, his death in a boating accident on 5 August 1778 at the age of twenty-two came as a considerable shock to English musicians. As The Morning Chronicle put it, ‘This accident has deprived the profession to which he belonged of one of its principal ornaments, and society of a very accomplished and valuable member’. Thomas’s death was only the first act of an unfolding tragedy: Samuel caught a fever on board ship and died later the same year, while Maria, Mary and Elizabeth Ann succumbed to consumption in 1784, 1787 and 1792 respectively. Thomas senior followed them in November 1795, the victim, it is said, of a broken heart.

The earliest music on this recording is the cantata In yonder grove. Like the other cantatas recorded here, it survives only in The Posthumous Vocal Works of Mr. Linley and Mr. T. Linley, published by his mother around 1800. It is not made clear in the volume whether the work was written by the father or the son, but a report in The Morning Chronicle tells us that it was performed at Thomas junior’s benefit concert in the Haymarket Theatre on 12 March 1773, that Elizabeth Linley ‘sang divinely’, and that the words ‘flowed from her own pen’. It was her last public appearance: she married Richard Brinsley Sheridan the following morning. To be honest, the words barely make sense, but the music is extraordinarily imaginative and accomplished for a sixteen-year-old. The work is modelled on the type of orchestral cantata that Thomas Arne popularized in the London pleasure gardens, though the delicious scoring of the first air owes something to Handel (the air with violin and cello obbligato in L’Allegro), while the second is the first of a long line of delightful Linley airs in rondeau form. The obbligato oboe part, still relatively simple, was presumably written for the twelve-year-old Samuel.

Ye nymphs of Albion’s beauty-blooming isle cannot be dated exactly and it is not attributed definitely to Thomas junior in The Posthumous Vocal Works, though it must be by him and was probably written a year or two later. The text is a little better, though its laboured and long-winded sentences suggest that Elizabeth Linley was also its author, and the concluding rondeau requires considerable virtuosity from both singer and oboist. The music, too, is more sophisticated and original and begins with a musical sunrise, a sensuous pre-Romantic evocation of nature; for perhaps the first time in English music the horn is used to portray the natural world at peace rather than the activity of the hunt.

In Darthula the setting is dark-ages Scotland rather than the debased eighteenth-century version of the world of Classical myth. The text is adapted from ‘Dar-thula a Poem’, published by James Macpherson in his 1765 ‘edition’ of The Works of Ossian the Son of Fingal. We now know that Ossian’s remarkable prose-poems are largely by Macpherson rather than by a Celtic bard, but at the time they caused a sensation and inspired much of the literature of the early Romantic movement, particularly in Germany where they were set by Schubert, Loewe and others; Linley may well have been the first English composer to set Ossian. According to Macpherson’s ‘argument’, Darthula (or Deidre) was the lover of Nathos, one of the three sons of Usnoth, Lord of Etha (in modern Argyll) who had successfully campaigned in Ireland against the usurper Cairbar. However, ‘a storm rising at sea they were unfortunately driven back on that part of the coast of Ulster where Caibar was encamped with his army. The three brothers, having defended themselves for some time with great bravery, were overpowered and slain, and the unfortunate Dar-thula killed herself upon the body of her beloved Nathos’. Linley’s cantata is on a large scale, with three contrasted airs, the first in the ‘scotch’ taste, the second a heroic da capo number in an exciting mixture of Handelian and galant styles, the third a touching minuet in rondeau form evoking the dawn.

Sheridan’s play The Duenna was first performed at Covent Garden on 21 November 1775 and was one of the most successful English operas; it held the stage all over Britain until the 1840s. Thomas Linley and his father worked on the music together, orchestrating and arranging some of the airs, and composing others from scratch. The three-movement overture is a spirited essay in the galant manner of J C Bach, though it has some individual touches. The plangent slow movement is scored for wind instruments alone, and the beautifully scored bagpipe-like passages in the final rondeau are perhaps intended to evoke the Spanish setting of the play.

Thomas Linley’s music for The Tempest was written for a revival of the play at Drury Lane on 4 January 1777. No copy of the text is known to survive but it seems that the main innovations were to replace the overture and Shakespeare’s first scene with an extended storm chorus, and to provide Ariel with a brilliant air, ‘O bid your faithful Ariel fly’, on his first appearance in Act I; the words for both were probably provided by Sheridan, who oversaw the production. Elsewhere, Sheridan seems to have retained most of the established music for the play (a mixture of the early eighteenth-century score then attributed to Purcell and now thought to be by his pupil John Weldon, and that written by Thomas Arne in 1746). Linley retained Arne’s famous setting of ‘Where the bee sucks’, but added a chorus, cunningly adapting and orchestrating material from a glee version of the song, published by William Jackson in his Op 11 (c1775). He replaced Arne’s settings of ‘Come unto these yellow sands’, ‘While you here do sleeping lie’ and ‘Ere you can say “Come” and “Go”’ probably because Arne never published them and they were therefore unavailable. Shakespeare’s chorus ‘Hark, hark, the watch-dogs bark’ was included in earlier settings of ‘Come unto these yellow sands’, but Linley gave it an independent setting in a different key (D major instead of B flat), so it is likely that Sheridan made a change to the play that required it to be separated from the song. The barking of the watch-dogs and the ‘strains of Chanticleer’ are amusingly rendered in the orchestra.

The late Roger Fiske wrote that Linley’s storm chorus is ‘one of the most remarkable achievements in English music’, and it is hard to disagree with him. It is laid out on the largest scale, with brilliantly assured and forward-looking orchestral writing supporting characteristically pure and conservative choral writing. One wonders whether Haydn knew it and had it in mind when he wrote his chorus ‘The Storm’ for a concert in London in February 1792. The two pieces have the same shape (storm—calm—storm—calm) and the same majestic sweep. Linley’s early death was a tragedy for English music, as Mozart recognized. He told Michael Kelly in 1784 that ‘Linley was a true genius’ who ‘had he lived, would have been one of the greatest ornaments of the musical world’.