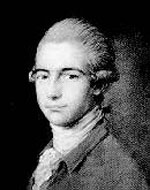 born: 7 May 1756
died: 5 August 1778
country: United Kingdom
The Linleys were the most important and influential family of musicians in eighteenth-century Bath. Thomas Linley the elder was the son of a builder and carpenter who moved to the city in the late 1740s to take advantage of the building boom. He became a harpsichordist, singing teacher and composer, and started to direct concerts there in the mid 1750s, gradually involving his talented children in them: Elizabeth, Mary and Maria were precociously gifted singers, while Thomas junior played a violin concerto in Bristol at the age of eight, and began to compose soon after. Thomas went to study with Nardini in Florence for three years in 1768, where he met and befriended Mozart, his exact contemporary. On his return in 1771 he became Bath’s leading violinist, a position he retained until 1776 when his father became one of the managers of the Drury Lane Theatre and the family moved to London. He died two years later at the age of twenty-two in a boating accident at Grimsthorpe Castle in Lincolnshire.

from notes by Peter Holman ©