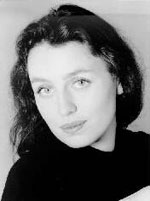 Julia Gooding studied in London at The Guildhall School of Music and Drama with Johanna Peters and is now an established concert and oratorio performer throughout Britain and abroad. Her operatic appearances have included Atalanta, Xerxes and Salome in Stradella's San Giovanni Battista at the Innsbruck Festival, Lully's Grotte de Versailles and Cupid in Blow's Venus and Adonis with London Baroque at the Paris Opéra-Comique and, more recently, Romilda in Handel's Xerxes for the Opernhaus Halle.

She has toured Britain, Europe and Japan with London Baroque singing Handel and Purcell and has sung Scarlatti cantatas in France.