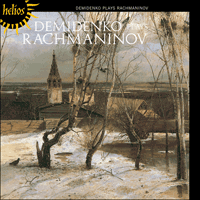 ‘A marvellous disc … this excellently chosen selection of Rachmnaninov's finest solo piano works is played with superb panache by Demidenko … with warm acoustic, a most appealing disc’ (BBC Music Magazine)
‘A marvellous disc’ (BBC Music Magazine)
‘Even in the current age of super-virtuosos, the demands of Rachmaninov's piano music are such that few players prove genuinely equal to the challenge. Nikolai Demidenko is certainly one—his control of dynamics, myriad tonal shadings and intuitive grasp of where the music is going inspire the greatest admiration … this is an exceptional collection of unforgettable miniatures’ (Classic FM Magazine)
‘This is by any standards a distinguished recital, and clearly the work of a master pianist’ (CDReview)

Music for Rachmaninov, Neville Cardus once wrote, ‘is not, as it is, say, with Horowitz, first an inspiration to brilliant and lovely piano playing. And notes for Rachmaninov are not, as they often seem for Schnabel, so many symbols of an invisible spiritual universe. Music is Rachmaninov’s “way of life”, his instinctive means of expressing experience. The piano is part of the universe in which he lives, as natural to his thinking and feeling as speech and physical reflex action … he plays from the creative centre outwards—not from the piano inwards’ (The Manchester Guardian, 12 March 1936).

My constant desire to compose music is actually the urge within me to give tonal expression to my thoughts … I have no sympathy with the composer who produces works according to preconceived formulas or preconceived theories. Or with the composer who writes in a certain style because it is the fashion to do so. Great music has never been produced in that way … A composer’s music should express the country of his birth, his love affairs, his religion, the books which have influenced him, the pictures he loves. It should be the product of the sum total of a composer’s experiences. Study the masterpieces of every great composer, and you will find every aspect of the composer’s personality and background in his music. Time may change the technique of music, but it can never alter its mission … In my own compositions, no conscious effort has been made to be original, or Romantic, or Nationalistic, or anything else … I am a Russian composer, and the land of my birth has influenced my temperament, and outlook. My music is the product of my temperament, and so it is Russian music … What I try to do, when writing down my music, is to make it say simply and directly that which is in my heart when I am composing. If there is love there, or bitterness, or sadness, or religion, these moods become a part of my music, and it becomes either beautiful or bitter or sad or religious. (Rachmaninov in interview with David Ewen, ‘Music Should Speak from the Heart’, The Etude, New York, December 1941.)

First played as an integral cycle at a concert in Kharkov on 28 December 1892, the Morceaux de fantaisie, Op 3, were written in the autumn of 1892. An aspiring hopeful of nineteen, recently graduated from the Moscow Conservatoire, admired for his pianistic talent and publicly praised as a composer by Tchaikovsky, Rachmaninov dedicated the set to his teacher, Arensky. He recorded Nos 2–5 for the gramophone, and cut piano rolls of the complete opus for Ampico in New York between October 1919 and October 1928.

Of the five pieces in the collection, the C sharp minor Prelude (premiered at the Moscow Electrical Exposition, 26 September 1892) has enjoyed extravagant fame at the expense of other and better creations. Ticker-tape America adored it (his cousin and piano teacher, the Liszt pupil Alexander Siloti, had seen to that in 1898): it was the only encore, if not piece, promoters and public alike ever seemed to want to hear him play. But he didn’t always oblige. James Huneker, reporting his New York debut (21 December 1918) in the New York Times, noted how ‘… the Rachmaninov “fans”—and there were thousands of them … clamoured for the favourite piece of Flatbush “flappers”. They surged towards Sergei in serried masses. They clustered about the stage … But Rachmaninov did not play It. All Flapperdom sorrowed last night’. At his first post-Great War European recital in London, on 6 May 1922, on the other hand, he did: ‘Rachmaninov’, The Observer reviewed, ‘filled the Queen’s Hall yesterday, and sent people away disappointed. Hofmann half fills the Queen’s Hall, and Busoni plays in the Wigmore Hall … But they never composed “The Prelude” … Would he actually play It, Itself? Rachmaninov bowed to the inevitable, sat down wearily, and played the piece which … of all pieces, he most hates’. Writing of his solo 1928 London recital (23 May), Ernest Newman pondered how this ‘little effort of his Byronic youth has been the making of [Rachmaninov]; for the general public, Rachmaninov is [this] Prelude, just as Charlie Chaplin is a pair of baggy trousers and hypertrophied boots, and George Robey is a pair of arched eyebrows’.

Resonating with solemn chordal bells and a wonderfully rhetorical Slav demonstration of what Deryck Cooke (in The Languge of Music, 1959) has called the pain and anguish of the falling minor sixth, its essentially Schumannesque tripartite form, with a contrasted middle section, is broadly shared by the rest of the cycle. In following the first edition of 1893, the present recording dispenses with the 1940 revisions of Mélodie and Sérénade. Whether or not, specifically, the recasting of the E major Mélodie (which version Rachmaninov recorded for RCA Victor) was an improvement remains debatable. Certainly, the first simplicity of idea, the distinctive throbbing triplet chords, the purer, less chromatically decorative harmonic vocabulary, and the slower tempo (Adagio sostenuto rather than Andante con moto) are facets of the original with a character distinctively their own. The title Polichinelle (Pulcinella, the ‘deformed bachelor who chased pretty girls’ of the Italian commedia dell’arte) was at the suggestion of Mikhail Slonov, a fellow student of Rachmaninov at the Moscow Conservatoire. Curious he wasn’t tempted to come up with some such similarly evocative name for the closing Sérénade—a seductively mezzo-voiced, guitar-inflected Russian Carmen scenario.

‘Rachmaninov’s Preludes’, the critic Yuli Engel wrote in 1911, ‘differ from Chopin’s in that they generally incline towards a solid and often polyphonic treatment, a broad structure, or towards clear contrasts of musically independent sections; in a word, they approach Chopin’s exceptions to his own rule.’ Dedicated to Siloti, the Op 23 set of ten dates mainly from 1903, while the thirteen of Op 32, contemporary with the Liturgy of St John Chrysostom, appeared between August and September 1910.

From Op 23, the F sharp minor, multiple-voiced and chromatically coloured in the detail of its accompaniment, is a sad song of desperate climax shadowed by Schumann’s Clara Variations at the end. Touched by menace, the D minor paraphrases the style of a minuet. Contrasting famous images of battlefields and dreamscapes, the G minor (1901) is an alia marcia of steely pianism and heady cantabile. Recalling chorale and ‘Revolutionary’ Chopin in its weighted bass octaves and rhetorical declamation, the C minor canvasses swirling semiquaver figuration. The G flat is an essay in broad-chested tenor melody, delicately supported.

From Op 32, the F minor (25 August 1910) and A minor (24 August) are texturally intricate quasi-studies, complex in rhythm and urgent in drama. According to Moiseiwitsch (The Gramophone, May 1943), Rachmaninov himself confirmed that the inspiration of the B minor (6 September) had been a painting, The Return, by Böcklin (another of whose works had only the previous year catalysed the orchestral tone-poem The Isle of the Dead). Celebrated by Paderewski and Horowitz, the intensely Russian G sharp minor (23 August) is a modal spinning-song of lingering memories, deceptive in its Allegro tempo marking.

The Études-tableaux Op 33 and Op 39 were conceived in 1911 and 1916–17. In a letter to Respighi (2 January 1930), Rachmaninov revealed that each had its own programme, a ‘secret’ explanation—identifying, however, only five. As John Culshaw comments in his study of the composer dedicated to Medtner (1949), Rachmaninov was a man who ‘cared little for what we might call “physical” programme music [in the Strauss understanding] … [but he] liked an external influence; he liked to be captivated or inspired by a picture or a poem, but the inspiration having been found he relegated the actual subject to the background and rarely revealed its identity’. Early critical reaction to Op 39—the last music Rachmaninov wrote in Russia—sensed important changes of mood and creative direction: ‘The soft lyricist begins to employ a more severe, concentrated, and deepened mode of expression’ (Russkaya Muzykalnya Gazeta, 11 December 1916); ‘These are lovely pieces, independent of their performer even when he is Rachmaninov himself … A new feeling hangs suspended over the entire opus. In one the shadows are faint, in another tempests gather force, in another a break can be seen through heavy, heavy clouds, but nowhere do we find happiness, calm, ease … Yet throughout them all, life pulses, saying in sound what has to be said, and saying it beautifully … The most attractive … is probably that in B minor—a wonderful piece, somewhat “humoresque”, sharply rhythmic’ (Engel, Russkiye Vedomosti, 5 December 1916).