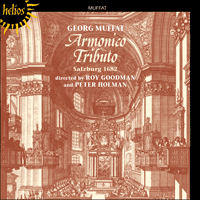 ‘I have always found the music indescribably beautiful’ (Fanfare, USA)
‘The best English baroque chamber music record I have ever heard’ (Hi-Fi News)
‘Can one find a more hauntingly beautiful piece than the Passacaglia from Sonata No 5’ (Goldberg)

In 1789 Charles Burney wrote, ‘George Muffat was an eminent organist, composer and fughist, and one of the great harmonists of Germany’. The case for a serious revival of Muffat’s music was made more recently by Arthur Hutchings in The Baroque Concerto (Faber, 1959): ‘Among composers of the second rank whose works deserve revival Muffat stands high. He avoided the formulae of his times unless he could invest them with life which grew to a musical organism. He seems to have been incapable of slovenly or even mediocre work and never to have fallen below a certain level of melodic charm and rhythmic invention. His best is far better than Torelli’s or Geminiani’s, and better than second-rate Vivaldi.’ It seems strange therefore that his relatively small output is largely ignored. Muffat holds an important position historically – he was the first adopted German composer to try to reconcile the national styles of Germany, Italy and France in one single musical style, something he was well equipped to do. His works are therefore the first German essays in what Couperin called ‘les goûts réunis’ (‘the styles reunited’), which aimed to combine the majesty and brilliance of the Italian concerto style with the delicacy and sophistication of French dance music. The five sonatas that comprise Armonico Tributo were his first published work.

Georg Muffat was born around 1645 in Mégève – a town in Savoy between Annecy and Mont-Blanc. Exact details of his birth and family background are not known, although he was baptized on 1 June 1653. He was probably of Scottish descent (Moffat is a familiar Scottish name) and his parents may have settled in France earlier in the seventeenth century. As a boy he went further north to Alsace, and in 1663 he went to Paris for six years to study with Jean-Baptiste Lully (1632–1687) and to observe the performance of the famous ‘Vingt-quatre Violons du Roi’. The ‘twenty-four violins’ (6.4.4.4.6) was a group established around 1626 under Louis XIII, consisting of six violins on the top line (with four oboes doubling), four violas on each of the three inner parts (the ‘parties de remplissage’) and six cellos (doubled by two or three bassoons) providing the basso continuo, together with harpsichords and theorbos.

The cellos in the French orchestra were large instruments (‘basses de violon’) tuned a tone lower down to B flat, and the violas too were of different sizes according to the tessitura required. Lully actually preferred to work with a slightly smaller group – the ‘Petits Violons’ or ‘La Petite Bande’ (6.2.2.2.4, with additional wind and continuo) – and by 1661 Louis XIV had given him complete control and a financial monopoly over all the music at court. Lully was dissatisfied with composing dance music for the Italian operas, so he attempted to reform the ballet de cour, and collaborated with Molière in a series of comédies-ballets culminating with Le bourgeois gentilhomme in 1670. Whilst in Paris, therefore, Muffat experienced at first hand the discipline of the French orchestra, with its special manner of bowing, refined use of ornamentation, and complex inequality of rhythm, all of which made such an impression on him that he felt it necessary to give a detailed account (copiously illustrated) in the preface to his second set of orchestral suites (Passau, 1698).

In 1669 Muffat returned to Alsace as a law student at the Jesuit Gymnasium in Sélestat, and after two years he went on to a similar college in Molsheim, near Strasbourg. During 1671 he was appointed organist to the exiled Strasbourg Cathedral chapter. Muffat finally took flight from Alsace at the outbreak of war, first to Ingolstadt in Bavaria (1674), then to Vienna (where he met the organist Johann Kaspar Kerll and found a patron in Emperor Leopold I), and then to Prague (1677) where he composed the Violin Sonata in D (his only extant autograph). The following year he moved to Salzburg and entered the service of the Archbishop (Maximillian Gandolf, Count of Kuenberg) as organist and chamber musician. Here he met Heinrich Biber (1644–1704) who had been employed by the Archbishop since 1670 and had already dedicated his set of twelve Sonatae tam aris quam aulis servientes (recorded by The Parley of Instruments on Helios CDH55041) to their mutual employer in 1676. Muffat was granted leave to visit Italy (1681/2), to study in Rome with ‘the world-famous Signor Bernardo’ (Bernardo Pasquini). Whilst in Rome, Muffat heard some concerti grossi by Arcangelo Corelli (1653–1713) which he later reported to have been ‘beautifully performed with the utmost accuracy by a great number of instrumental players’. In addition, he found in them a fusion of ‘profound Italian feeling’ with the lighter French ballet style. This evidence is of particular interest, since it proves that at least some of Corelli’s opus 6 (possibly the last four, which are ‘da camera’) were composed long before their publication in 1713. Muffat described his visit to Italy and his first-hand encounter with Corelli in the foreword to his own set of twelve concerti grossi (Passau, 1701). In fact his five sonatas, Armonico Tributo, were composed in Italy, and as the result of trial performances in Corelli’s own house Muffat was deeply indebted to the Italian master for ‘many useful observations touching this style, most graciously communicated to me’.

The Archbishop of Salzburg died on 8 May 1687, and although both Biber and Muffat continued to serve his successor (Count Johann Ernst of Thun) Muffat became dissatisfied and eventually left. In 1690 he went to Augsburg for the coronation of King Joseph (the eldest son of Emperor Leopold I) where he performed his Concerto VIII (‘Coronatio Augusta’, composed in Salzburg the previous year) and also made a personal presentation of twelve toccatas and other works for organ (Apparatus musico-organisticus) to its dedicatee, the Emperor. Later that year he took up his last appointment, as Kapellmeister at the court of the Bishop of Passau (Johann Philipp of Lamberg) where he remained until his death on 23 February 1704. During these years at Passau, Muffat published fifteen orchestral suites – Florilegium I (seven suites, 1695) and Florilegium II (eight suites, 1698) – and a treatise on continuo practice (Regulae concentuum partiturae, 1699) in addition to his twelve concerti grossi (Ausserlesene Instrumental-Musik, 1701). The foreword to this last publication concluded with the news of a proposed set of orchestral suites (Florilegium III) – a work which sadly never materialized.

The five sonatas of Armonico Tributo were published in Salzburg in 1682, and are scored for two violins, two violas and basso continuo. Muffat, in his usual practical way, defined them as ‘chamber works suitable for few or many instruments’ and although the score is laid out with the letters ‘T’ and ‘S’ indicating tutti and solo passages, this seems to be something of an afterthought and the music seems well suited to single players. In the present performances therefore, there is an apparent ‘solo’ group of two violins, cello and continuo, to which is added a ‘tutti’ of two violas, bass and continuo.

Muffat explored the possibilities of the concerto principle in his later versions of these pieces, since most of the movements appear, albeit newly arranged, in his twelve concerti grossi. (Sonata I appears in Concerto V, Sonata II in Concerto IV, Sonata III in Concerto II, Sonata IV in Concerto XI, and Sonata V in both Concertos X and XII.) There is no fixed pattern for the sonatas, although there is clearly a strong French influence in the variety of dance movements (well-defined phrase lengths with simple harmony and flowing melody), and Italian influence in both the Grave or Adagio sections (either a simple punctuated succession of chords, or a sequence of suspensions above a ‘walking’ bass) and in the more contrapuntal and concertante Allegros.

Sonata I opens with a two-section Sonata in the Italian style – a passage of majestic harmony leads to a richly wrought fugue. It is followed by three French-style dances interspersed with short Grave passages of a type common in Corelli.

Sonata II is based on a similar pattern, though slightly expanded. Handel must have known this sonata; he used the tune and bass of the Aria in a number of works, including Agrippina, a recorder sonata and two organ concertos.

Sonata III also combines abstract Italian-style movements with French dances – after a short opening Grave in block chords there is a loosely written but brilliantly effective fugue on three subjects which are heard in most possible combinations and inversions. Of the following numbers, the short Adagio before the Gavotta is especially remarkable for its daring harmony.

Sonata IV opens again with a two-section Sonata, featuring a walking bass under rich suspensions of the type popularized by Corelli. After a lively Balletto, there is another favourite Corelli device – the alternating of Adagio passages for the whole ensemble with brilliant solos for the two violins and continuo alone. After a Menuet and a short Adagio, there is a Presto movement entitled Aria which is written in duple time, but which is intended to be played as a gigue in 12/8, using a notational convention common in German keyboard composers such as Froberger and Böhm.

Sonata V is rather differently laid out from the other four in that it does not start with a two-section Sonata, but with an expressive Allemanda. A complex fugue is then sandwiched between two Adagios, both of which again display the ‘walking’ bass and wonderful harmonic suspensions. The set ends with a magnificent Passacaglia containing twenty-five variations on a standard ground bass – related to the one used by Bach in the ‘Goldberg’ variations. Muffat was evidently pleased with this movement for he re-used it later in a modernized form at the end of his twelve concerti grossi of 1701.