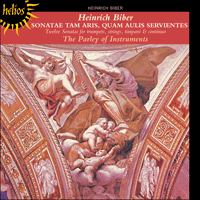 The music of Heinrich Ignaz Franz von Biber has never been entirely forgotten in the centuries following his death in 1704. In 1789 Charles Burney wrote that ‘of all the violin players of the last century Biber seems to have been the best, and his solos are the most difficult and most fanciful of any music I have seen of the same period’. In the nineteenth century Biber was remembered mainly as a precursor of Bach; his virtuoso violin writing using chords and scordatura was held, rather dubiously, to have influenced Bach’s unaccompanied violin music. Today, with the availability of more of Biber’s music in modern editions, a more rounded portrait of the man and his music has emerged. Burney was right in observing that his solo violin music is the ‘most difficult and fanciful of the period’, but we are beginning to see that some of his best work is to be found in his relatively straightforward consort sonatas; music that displays a mastery of counterpoint and a fondness for heartfelt melody more than a battery of virtuoso effects.

Biber was born in Wartenberg, near the modern Czech town of Liberec, in August 1644. We do not know much about his early life except that at some point in the 1660s he became a member of the excellent ensemble employed by Prince-Bishop Karl Liechtenstein-Kastelkorn at Kromeríz in central Moravia. We know that he played the bass viol and the bass violin there as well as the violin; his earliest dated composition, an incomplete Salve regina from 1663 preserved at Kromeríz, is scored for soprano with bass viol obbligato. We also do not know for sure who taught Biber composition and the violin, though the most likely person is the Viennese court composer Heinrich Schmelzer. Biber’s early compositions are heavily influenced by Schmelzer, and his virtuoso violin writing seems to start where the older composer left off.

During the winter of 1670/71 Biber suddenly left Kromeríz to take up an appointment at the Salzburg court, and he remained there, as far as we know, for the rest of his career. Salzburg provided Biber with steady promotion until he reached the position of Kapellmeister in 1684. It also provided him with an increasing reputation throughout Germany based on a series of publications, begun with the set of consort sonatas recorded here, the Sonatae tam aris, quam aulis servientes of 1676. Curiously, Biber’s most famous works today, the fifteen ‘Mystery’ or ‘Rosary’ sonatas for violin and continuo, only survive in manuscript, though it is possible that he intended them for publication. (The manuscript at Munich looks like printer’s copy.) Biber’s last years appear to have been taken up largely with operas and Latin school dramas, all but one of which are lost. He died at Salzburg on 3 May 1704.

Sonatae tam aris, quam aulis servientes (‘Sonatas as much for the altar as for the table’—i.e., sacred and secular) was issued in parts by the Salzburg publisher J B Mayr and was dedicated to Biber’s employer, the Prince-Archbishop Maximilian Gandolph, Count Khüenberg. Nine of its twelve sonatas are also found in manuscript in the Kromeríz court collection, and this has led to speculation that they at least were written before Biber left Kromeríz, though it could equally be that he sent manuscripts of his work from Salzburg to his former employer. Certainly it looks as if the collection was planned as a set of twelve, perhaps for performance in sequence at the Salzburg court.

The sonatas are admirably varied in key, mood and scoring, and they open and close with impressive works using the full ensemble. Biber’s model, both for the collection as a whole and for some of the individual sonatas, appears to have been Schmelzer’s Sacro-profanus concentus musicus of 1662. Like Schmelzer, Biber writes for a maximum ensemble of two trumpets with six-part strings, and both composers also use smaller combinations such as two violins, two violas, bass and continuo, and two violins, three violas, bass and continuo. Like Schmelzer, too, Biber divides his sonatas roughly into those, like Nos I, II, XI and XII, that are basically contrapuntal, and those, like Nos V, VI, VIII and IX, that mix counterpoint with an idiom derived from dance music. Both types, in fact all the sonatas in the collection save one, are cast in a form that can be likened to a patchwork quilt, with a number of sharply contrasted sections within a single movement. Sometimes Biber appears to be trying to push this patchwork technique to the limit, as in Sonata IX where the listener is taken through a kaleidoscopic series of eleven time-changes in under one hundred bars. Biber also follows Schmelzer in often constructing his sonatas like a chain: sections tend to have something in common with their neighbours—a rhythm or a fleeting turn of phrase perhaps—but the common material changes as the sonata progresses. In this respect, Biber’s counterpoint has more in common with the sixteenth-century fantasy than the eighteenth-century fugue. The one sonata in the collection that is not in the patchwork form is No VII, a set of variations over a walking ground bass for two trumpets in dialogue with two violins. Austrian solo violin sonatas were often constructed over ground basses, but consort works of this type are very rare.

Whoever they were written for, the Sonatae tam aris are virtuoso works requiring an accomplished ensemble. Its first trumpeter, for instance, has to be able to play florid music not only in the traditional C major, but also in the unusual key (unusual, that is, for a natural trumpet) of G minor. The work in question, Sonata X, was probably inspired by the famous Kromeríz trumpeter Pavel Vejvanovský, who also wrote a trumpet sonata in G minor. Apparently Vejvanovský had mastered the art of lipping the flat seventh harmonic (b' flat) into tune and obtaining the non-harmonic tone e'' flat so as to be able to play in G minor on a normal C trumpet. Biber’s string parts, too, are much more difficult than those found in the general run of five- and six-part consort music at the time, though they do not use chordal writing or scordatura. In particular, Biber seems to write about a fourth higher than normal for both violins and violas. In Sonata XI the violins ascend constantly to e''' while the violas reach a'', creating a most brilliant effect.

It is important to remember when performing seventeenth-century consort music from printed collections that publishers were anxious to keep costs to a minimum, so inessential or doubling parts were frequently omitted. Thus a number of the sonatas on this record are played with a 16' pitch bass doubling the cello, and with two continuo instruments—Italian harpsichord, Italian virginals, theorbo, and chamber organ in varied combinations. Manuscripts of similar sonatas, like the ones by Schmelzer at Uppsala, frequently have three or four duplicate figured and unfigured bass parts. We chose an Italian harpsichord and virginals for the recordings because the few Austrian keyboard instruments from Biber’s time that have survived are very similar to Italian models. We have also added our own timpani parts to Sonatas I and XII. Composers writing works for several trumpets often did not bother to write timpani parts since the players of the time were capable of improvising them. We feel that both sonatas contain several passages that are greatly improved as a result.