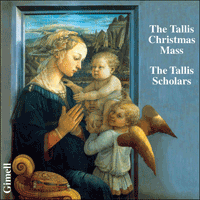 "Not long ago neither Tallis's Missa Puer natus est nobis nor his antiphon Ave, Dei patris filia could have been recorded: the manuscripts for some of the voice-parts were missing and were believed to be lost for ever. It is a privilege to put such significant works together on disc for the first time." (Peter Phillips)

Our fourth disc dedicated to the music of Thomas Tallis contains two of his most substantial masterpieces – the seven-part Christmas Mass Puer natus est nobis and the antiphon Ave, Dei patris filia. Not long ago neither of these pieces could have been recorded: the manuscripts for some of the voice-parts were missing, believed to be lost for ever. It is a privilege to put such significant works together on disc for the first time.

Tallis’s Missa Puer natus est nobis, based on the Christmas plainchant of the same name, is the most elaborate setting of the Ordinary to come from England in the middle of the sixteenth century; it is also by far the most elaborate by Tallis himself. Its scale is determined by the way the plainchant is distributed through the polyphony. This is done in quite exceptionally long notes, always in the tenor, in a style which had been popular in England (and elsewhere) early in the century but of which no example from later than about 1540 is otherwise known. The cantus firmus thus makes the movements lengthy in performance; but Tallis’s music is also substantial vertically, requiring an unusual choir of seven voices, scored mean, mean, alto, alto, tenor, bass, bass. Since all these voices are used almost continuously – there are no scorings down to trios and quartets as was customary in earlier festal masses – the cumulative effect really is massive. In our interpretation we have encouraged this in-built sonority to speak for itself by making the phrases as spacious as possible.

There can be no doubt that Tallis wrote this piece for a big occasion. Although there is no conclusive proof, the evidence of the choice of chant, the archaizing in having a long-note cantus firmus against the dramatically more modern (and Flemish) use of imitation between the voices, and the sheer scale, suggest it was composed for the visit of Philip II of Spain to England in 1554, when he married Queen Mary. It is known that Philip was in the country on Christmas Day and it is well known that English Catholics were hoping Mary would give birth to a son and heir (so the words ‘Puer natus est nobis’ probably had a double relevance). But for Tallis perhaps the most significant aspect of the festivities was that Philip had brought with him his famous Capilla Flamenca, or Flemish Chapel Choir. This would have put Tallis very considerably on his professional mettle, since it contained some of the leading names in Flemish composition, including Philippe de Monte. He chose to impress them by combining old techniques with new in a virtuoso mix; he also preferred a thick, essentially Flemish sonority over the more traditionally spacious English scoring involving the high treble voice, which he did make use of in other music dating from Mary’s reign. The strong Flemish references in Puer natus est nobis were surely deliberate.

Despite the discoveries of recent years which have rendered Puer natus est nobis complete enough to perform in three of its movements, the Credo is still almost wholly missing (apart from the final phrase from ‘Et expecto’). Of the others the Gloria is entire but the Sanctus is lacking its second alto in the opening section. The Agnus Dei is the least complete, missing the second alto throughout and the first bass during the first two invocations. These parts were supplied by David Wulstan and Sally Dunkley. Missing also is a rational explanation for why Tallis broke the Puer natus est nobis plainchant up as he did to form the cantus firmus. As Wulstan and Dunkley observe, its tones are ‘neither given in long notes of equal value, nor in decorated form. Instead they are arranged rhythmically according to a cabbalistic pattern, the significance of which is difficult to discern’. There are one or two obvious pointers: the Gloria states the whole cantus firmus once – this is the first four phrases of the plainchant. The Sanctus begins with a strict diminution of the first part of the plainchant used in the Gloria, then repeats it in retrograde. However, after this there are repetitions and retrogrades which seem to be random. One of the most challenging aspects of having a cantus firmus which moves so slowly is the rate of harmonic turnover. As a result of it Tallis was obliged to maintain the same underlying harmony, often for several bars at a time, sometimes for many. At one point in the Agnus Dei the tenor maintains an A flat almost unbroken for thirty-one consecutive bars. This throws the burden of interest on the part-writing around the tenor, which Tallis promoted by the most resourceful use of imitation. One impressive aspect of his achievement was to give this most solid of conceptions some irresistible rhythmic energy (for example in the ‘Hosannas’). On the other hand in the Agnus Dei the inherent harmonic quietness of the long notes creates a perfect mood for the text, enabling Tallis to write some mesmerizing repetitions, almost mantra-like. Taken all together the techniques contained in Puer natus est nobis make it a most unusual composition.

Audivi vocem and the four-voice Magnificat are considerably more compact than Puer natus est nobis, partly because Tallis left half their texts in plainchant. Audivi vocem is one of his most purely beautiful compositions. A setting of the respond at the service of Matins on All Saints’ Day, it makes use of Sarum Rite chant, which means it must have been written before 1559 when this rite was finally abandoned. The style of the music, however, suggests a date rather earlier than Mary’s reign, with its avoidance of imitation and uninflectedly modal harmonies. The four-part Magnificat appears to be very early, indeed there are moments in it – like the downward scale at ‘et sanctum nomen eius’ – when it gives the impression of being an apprentice piece. Certainly its texture of four voices singing within an overall compass of two octaves and a tone has an archaic sound, reminiscent of some of Taverner’s writing, which is also recalled in the actual polyphonic detail. Like many late medieval English Magnificat settings it is based on a faburden tenor. In our performance this is sung by altos, since we have scored the piece for two means, alto and tenor (the original bass part); but its narrow compass means it could be sung at a number of different pitches.

Ave, Dei patris filia is one of five votive antiphons by Tallis, four of them (Ave rosa; Salve intemerata; Ave, Dei patris filia and Gaude gloriosa; the exception is Sancte Deus) containing some of his most spacious lines. Until David Skinner recently found some missing material in the British Library, Ave, Dei patris filia had long been considered to be unreconstructable, and even now it lacks its tenor until the final page and its treble in the first part of the ‘Amen’. Nonetheless Skinner’s detective work and subsequent reconstruction have revealed a major addition to Tallis’s oeuvre, and one which does not exactly duplicate the style of any of the other antiphons. It is interesting to observe that in this instance – and not in any of the others – Tallis was contributing to a tradition of settings of a text: amongst the other composers to have chosen Ave, Dei patris filia were Fayrfax, Taverner, Marbecke and Robert Johnson, alongside two earlier anonymous ones, all of them in the traditional five-part scoring of treble, mean, alto, tenor and bass.

The text has seven stanzas, of which the last is extended, the number seven often having been associated with the Virgin, most obviously in the Feasts of the Seven Joys and Seven Sorrows. Each stanza begins with the word ‘Ave’, and each begins a new section in the music, which mostly involves a change in scoring. To create a strong half-way point Tallis joins stanzas three and four into a long full section; and he is able to do the same at the end with the extended seventh stanza, building its ‘Amen’ into something magnificent. In between are some substantial trios and one duet (stanza six). Twice the initial ‘Ave’ is given special emphasis by the marking of fermatas (or pauses) over each of its syllables.

Though all of Tallis’s antiphons are fairly early works, Ave, Dei patris filia gives the impression of being one of his first mature compositions (contemporary with the Magnificat and earlier than Audivi vocem and Puer natus est nobis), probably written in the 1530s. It shows signs of being an apprentice work in the closeness with which it follows the layout and detail of Fayrfax’s setting of the same text, especially at the beginning, at ‘Ave, Eterne’, and largely in the overall scoring. In fact, as Dr Skinner has shown, it was possible to identify where the missing tenor part sounded in the Tallis from a close study of Fayrfax’s own scoring.

Ave, Dei patris filia also shows the strong influence of John Taverner’s music, though in fact Tallis amalgamated two contrasted, though not contemporaneous, elements in Taverner’s style. On the one hand he chose to write a full-length festal votive antiphon while, like Taverner, avoiding the kind of purely virtuosic display in the vocal lines which is more often found in similar works by Cornysh and Browne; on the other he regularly deployed one of Taverner’s favourite techniques from his later and more compact non-festal antiphons – creating answering phrases in the full sections between the two top voices and the three lower ones with almost syllabic word setting. Somehow, by working quite brief motifs on a festal scale, Tallis was able to conceive some of the most memorable writing in all his pre-Reformation compositions – ‘semper virgo Maria’ just before the ‘Amen’ is a perfect case in point. There is nothing flamboyant about this, and yet this music seems to have all the time and spaciousness associated with the old festal antiphon, and the late medieval world which promoted it.