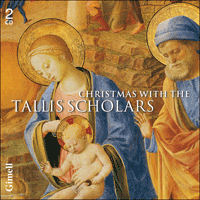 Christmas with The Tallis Scholars

"I am delighted to recommend this seasonal selection. Over the years we have recorded many different types of Christmas music—carols, chant, chorales, hymns, motets and masses—but this is the first time they have been put together in one collection." (Peter Phillips)

Every choral group knows what it is to plan a Christmas programme. The Tallis Scholars are no exception, with the difference that every year for the last fifteen we have kept going back to the same places in the United States for Christmas concerts, and, not wishing to repeat ourselves, have slowly put together a substantial repertory of appropriate music: substantial and diverse, including medieval carols, German chorale harmonizations, complete polyphonic settings of the Mass based on Christmas themes, and motets dedicated to Mary and Joseph. Some of these riches we eventually recorded, originally on four separate releases. These two discs give a selection.

The first disc is taken from our ‘Christmas Carols and Motets’ recording, which was designed to show off the medieval carol alongside more polyphonic music. The carols are all of English provenance, culminating in two settings of the Coventry Carol. In general the carol was a form of popular music, retaining an unsophisticated manner and for many centuries transmitted by oral tradition only. There are carols on just about every subject of concern to people living in those past centuries, including drinking and fighting; but the majority refer to religious topics, and of these Christmas is the most represented. Many carols include a refrain, which presumably was sung by everybody standing round, while the verse was performed by the person who came up with the idea in the first place. The refrain would have been sung after each verse, as may be heard here in Nowell sing we, There is no rose and Lullay: I saw which, like every Coventry Carol, has ‘lully, lulla’ as its refrain. Angelus ad virginem, by contrast, is not of popular origin, being in Latin and based on plainchant.

Many Renaissance composers set the beautiful words ‘Ave Maria’ (‘Hail Mary’), so central to the Christian faith. One of the earliest is the four-part version by Josquin des Prés, famous for its simplicity of expression. The same simplicity and clarity of part-writing characterizes the linked seven-part settings of Beata es virgo and Ave Maria by Philippe Verdelot, in which the second soprano part carries the ‘Ave Maria’ chant throughout. By contrast the two settings by Victoria (of which the four-part is only attributed to him) include wide variations of texture and rhythm, especially noticeable in his highly expressive eight-voice version.

The well-known repertoire of German Christmas melodies evolved rather later than the English medieval carol. All these melodies are taken from chorales, most of which were written after the Reformation in the sixteenth century, though it is possible that some of them, like In dulci jubilo, go back further into oral tradition. They underwent many harmonizations and arrangements over the years, as Lutheran musicians thought fit, though few can rival in sensitivity those given here. Michael and Hieronymus Praetorius, who were not related, were both working in Germany at the turn of the seventeenth century.

Disc one also includes the monumental Missa Pastores quidnam vidistis and the motet it parodies, both by the Flemish composer Jacob Clemens non Papa (c.1510–c.1555). It is chosen for this Christmas compilation because the text of the motet describes the moment just after the birth of Jesus when some shepherds, who have already worshipped the baby, are asked by bystanders what they have seen. The joyful mood inspired by their description of choirs of angels praising God informs all the music which follows. The style of both the motet and the Mass is typical of Clemens’s conservative interpretation of the Flemish way of composition, unfolding with great deliberation, every clause of words being given its own exposition in the polyphony. It is a classic style, capable of the greatest subtlety and variation of expression, while always inviting the listener to search more deeply into the music. Clemens uses a five-voice choir SSATB except in the final movement where he adds a second bass part.

The second disc is dedicated much more specifically to plainchant, and music based on chant. It begins with the contents of the only record The Tallis Scholars have so far made of chant alone. This collection consisted entirely of music written for Christmas, beginning with the complete Mass ‘at cockcrow’ or ‘in gallicantu’. This would have been celebrated at daybreak on Christmas Eve, and is taken from the Sarum rite. It begins with an Introit which moves straight into a troped Kyrie, the trope ‘Deus Creator omnium’ actually replacing the original words ‘Kyrie eleison’ and running to nine invocations (a ‘trope’ could be either a musical or a textual addition to traditional material). The Gloria begins with an intonation from the altar, the bulk of the text following in the syllabic style of the Kyrie.

The Lesson, ‘Laudes Deo’, is taken from the Book of Isaiah and is sung here in a special troped form by two tenors, one of whom has the actual text of the lesson while the other interpolates the trope. By contrast the Gradual is in a more florid style with a much wider vocal range than the previous movements.The Sequence is different again, reflecting its origin as a poem in rhymed stanzas. These stanzas are sung antiphonally, the singers being joined by a bell towards the end to underline the joyful nature of the occasion. The Mass then continues through the customary movements of the Ordinary – the Credo, Sanctus and Agnus Dei – which are in the syllabic style of the Gloria. The celebration ends with the Communion, a short chant sung during the reception of the Host; and the Dismissal from the deacon, to which everybody replies ‘Thanks be to God’.

In addition to the Mass we have included four hymns proper to the different Offices for Christmas Day: Christe Redemptor omnium is from Matins; Veni, Redemptor gentium is from Vespers; Salvator mundi, Domine is from Compline, and A solis ortus cardine from Lauds. These are amongst the best-known plainchant hymn tunes, which may often be heard today whether in Latin or the venacular.

The disc also includes Tallis’s Missa Puer natus est nobis, which is based on the Christmas plainchant of the same name. Which Christmas Tallis wrote it for, and why he made it so substantial, is a matter for debate. The most likely explanation is that it was composed for the visit of Philip II of Spain to England in 1554, when he married Queen Mary. It is known that Philip was in the country on Christmas Day that year and it is well known that English Catholics were hoping Mary would give birth to a son and heir (so the words Puer natus est nobis probably had a double relevance).

But for Tallis perhaps the most significant aspect of the festivities was that Philip had brought with him his famous Capilla Flamenca, or Flemish Chapel Choir. This would have put Tallis very considerably on his professional mettle, since it contained some of the leading names in Flemish composition, including Philippe de Monte. He chose to impress them by combining a correct, almost academic style, shown in the long-note statements of the plainchant (always in the tenor voice), with new methods, such as a consistent and very Flemish use of imitation between the voices. The strong Flemish references, which include the thick sonority of the writing, were surely deliberate. Despite recent discoveries in the manuscript sources which have rendered this setting performable in three of its movements, Tallis’s Missa Puer natus is still not complete. The Credo is still almost entirely missing (apart from the final phrase from ‘Et expecto’), and the other movements lack some of their voice-parts (these have been supplied by David Wulstan and Sally Dunkley). The Kyrie is missing because at that time in England this movement was not considered to be part of the Mass Ordinary. But in compositional terms the most surprising aspect of this Mass is the combination of the chant statements with busy imitation, especially noticeable in the Agnus Dei. In the sense that Tallis throughout his life showed himself adept at looking backwards and forwards, the Missa Puer natus is his quintessential masterpiece.