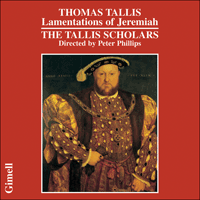 The music in this third Gimell anthology dedicated to Tallis comes from both early and late in his career. Separated by perhaps forty years it is hard to believe they were all written by the same man.

Some of these recordings are also available on the specially priced double album The Tallis Scholars sing Thomas Tallis. In ieiunio et fletu, O salutaris hostia and

The music contained in this third Gimell anthology dedicated to Tallis comes from both early and late in his career. The Lamentations and the motets were all written during Queen Elizabeth I’s reign (1558–1603). Salve intemerata, one of the greatest of all the votive antiphons and possibly the longest single movement in the Tudor repertory, was written when Tallis was still a young man, during the Catholic period of Henry VIII’s reign (1509–1547). Separated by perhaps forty years, the style of the antiphon is so different from that of the Lamentations and the motets that it is hard to believe they were all written by the same man.

The Lamentations and the eight motets are clearly in the idiom common to all late-Renaissance English composers. This was a style which Tallis received indirectly from abroad and adapted to his own requirements. As always, the melodic lines are concise and often begin by imitating each other; to this framework Tallis added his own sense of tonality, dissonance and, in particular, frequent use of the false relation (so memorable in the final cadence, amongst others, of O nata lux). On the other hand Salve intemerata is still in a late medieval style, unique to England, with exceptionally long lines, little imitation and cautious tonality, though even here the false relation, so beloved of English composers right up to Purcell, is occasionally in evidence.

Tallis’s Lamentations were probably intended as independent motets for use in Holy Week and not for any ritual Office. Paul Doe has gone further in saying that ‘they were not conceived as church music at all, but rather for private recreational singing by loyal Catholics’, just as so many of Byrd’s motets were later to be. Although the texts of the two sets comply almost precisely to those of the first two Lessons of Maundy Thursday Matins in the Sarum Use, they would not have been sung consecutively, being separated by a sung responsorium, In monte Oliveti, and Tallis has in any case set his two Lessons in different modes. Their compositional method is similar, however, and for this reason we have grouped them together on this recording; the Hebrew letters are set in an abstract manner, almost like consort music, which contrasts with the more declamatory writing in the verses themselves. Both sets end with some of the most inspired writing of the period, to the words ‘Ierusalem, Ierusalem, convertere ad Dominum Deum tuum’ (‘Jerusalem, Jerusalem, turn to the Lord, your God’) which may well have had symbolic meaning to Tallis, a Catholic in a Protestant country.

The motets on this recording have been divided into two groups by virtue of their scoring: the first five for MAATB, the second three for TrMATB. There seems to be no particular reason why Tallis made this distinction, for the eight are quite closely linked in style, date and original purpose. All of them, like the Lamentations, use well-established liturgical texts, but use them either only in part or with adaptations so that they could not have been intended for ritual singing. It seems that Tallis was exercising the new freedom of an English composer, which had been established at the Reformation, to choose his own texts; and, possibly with the instinctive conservatism of old age, he chose old favourites with particular meanings or associations. He must have intended them to be sung as isolated motets, for example before or after a service.

The sources for these motets are as follows: Absterge Domine is a prayer for general use; Derelinquat impius and In ieiunio et fletu are Responds for the first Sunday in Lent; Mihi autem nimis is an Introit for the Feast of the Apostles; O sacrum convivium is the Magnificat Antiphon at Second Vespers of the Feast of Corpus Christi; O salutaris hostia is the fifth verse of the hymn Verbum supernum prodiens; In manus tuas is a Respond at Compline and O nata lux is made up of the first two verses of the hymn for Lauds at the Feast of the Transfiguration. All these texts are contemplative in mood, and some from the first set are overtly penitential. In all of them Tallis maintained a certain emotional distance, though in In ieiunio et fletu, in particular, he let the mask slip. The beginning of Derelinquat impius is remarkable for its word-painting, which hardly occurs elsewhere in Tallis’s music: the inability of the sinner to find his path is expressed by a wayward melody and by the unpredictable and unexpected note with which each new voice enters at the beginning.

In the history of votive antiphon composition in England, which lasted from about 1400 to 1550, Tallis’s Salve intemerata came near the end. The final examples of this genre were to be his own Gaude gloriosa and William Mundy’s Vox Patris caelestis. In fact Salve intemerata sounds almost old-fashioned for a work which was probably written in the 1530s. Unlike the largest pieces by his near-contemporary John Sheppard, or his older colleague John Taverner, which tended to be scored for a six-part choir of treble, mean, two countertenors, tenor and bass, Tallis chose the more modest five-part version which has only one countertenor part. Although this line-up of voices may be found throughout the period, it was especially characteristic of the early antiphons in the Eton Choirbook, dating from the 1480s. In addition Tallis chose to write in the phrygian mode (starting on E with an F natural, which rules out the dominant chord and therefore perfect cadences) and to adhere to it, where most sixteenth-century composers would have used a mode, especially a difficult one, merely as a starting-point. Although I believe Tallis did this for aesthetic reasons as much as out of a sense of compositional propriety, this polyphony has a distinctly late medieval tinge to it. The choice of the phrygian mode may have been necessitated by an intention to include chant: but in this respect at least the music was fully up-to-date. If it was based on chant, Tallis hid it so perfectly that no one has yet been able to find it.

Commentators have had trouble with Salve intemerata. Its substantial length and wide overall vocal range discourage a casual sight-reading, and its appearance on the page, rather than its realization on the ear, gives the impression of a restricted idiom. In addition its prose text has been described as ‘rather rambling’. I believe that Tallis deliberately chose this text and this idiom in order to set his still youthful technique a challenge. In the first place his almost strict employment of the phrygian mode allowed him to concentrate on melodic considerations to an unusual degree. Melody within a complex polyphonic framework was, throughout his life, one of the most consummate aspects of Tallis’s art; and of all his works the melodies in Salve intemerata flow with the least interruption from harmonic promptings. They may be long and abstract melodies, but singers who have a good knowledge of his music will know that he never wrote any that were finer.

The truly magisterial aspect of the composition is its overall plan: the alternation of duets, trios and full sections through which tension is created and then partially released, only to be subsequently recreated the more strongly, until the ‘Amen’ is reached. At this point, to irresistible effect, Tallis broke out of the phrygian mode, involving the basses in a sequential phrase which takes in a flattened fifth. There can be no doubt that the broad canvas of this masterpiece was carefully laid out: that the harmony should not detract from the melodies but that the final passage should be all the more impressive for allowing this single piece of colour. We can only marvel that a young man was capable of conceiving it; and then, not much later, was equally capable of writing in the completely different style described above.