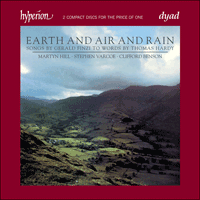 Earth and air and rain

‘There are so many really subtle and distinguished performances in this set, and so much sheerly beautiful singing, that I shall be listening to it often over the years’ (Gramophone)
‘These are marvellous songs’ (The Oxford Times)

Thomas Hardy’s Collected Poems would have been one of Gerald Finzi’s desert island choices. Not that he was ever himself marooned; but at the outbreak of the last war his friend the composer Robin Milford was isolated on Guernsey and, in discussing Hardy, Finzi wrote to him that ‘if I had to be cut off from everything that would be the one book I should choose’. More poignantly he wrote in 1949 to another friend that there were perhaps another hundred poems of Hardy which attracted him, but he suspected he’d go to his grave with most of them unset. This is borne out by his copy of the Collected Poems, in which he has lightly crossed through those he has set, and marked those he would like to set. There are many more marked than crossed through. Even so, he completed setting over fifty of Hardy’s poems, forty-three of them recorded here.

The earliest songs date from the 1920s; the latest from a few months before his death in 1956. Such an association argues a commitment closer even than Fauré’s with Verlaine, Schumann’s with Heine, Wolf’s with Mörike. Finzi and Hardy could have met. There is no record that they did, though they might have seen each other at Boughton’s Glastonbury Festival of 1919. When Hardy’s library was sold in 1938 Finzi went to the sale and, though he dared not hope he could get any of the books, he was at least able to buy Hardy’s walking-stick. (It now belongs to the Dorchester Museum.) Later Howard Bliss, brother of Arthur, gave him the authograph of ‘We Field-Women’, which became a treasured possession.

Why did he set so much Hardy? He is not the most obvious choice for a lyrical composer. The poems Finzi chose cover a wide range of verse-forms and metres, few of them easy-running, many with intricate rhyme-schemes. The language is by no means always mellifluous. There are few spare words or bland descriptions, but keen precise observations. Lines are often hard-packed with crusty sounds and sometimes teasing inversions. Not everyone would feel attracted to a poem which ends ‘So mean I:—So mean I’, or to one where the double rhymes run ‘tryst, I; fecisti; missed I; -duxisti; wist I’, etc. Not everyone could find the right tone of voice to take in such a parenthesis as ‘(Such will not be, but because Some forget Let me feign it)’. Not everyone would enjoy the archaisms that Hardy uses.

But Finzi loved words. Though he never wrote poetry, he was a superb letter-writer who obviously enjoyed for its own sake the choice, sound, and placing of a word. His very large private library—all bought by himself, not inherited—contained far more books of literature than on music. And to a large degree his reaction was instinctive. ‘Some composers’, he wrote (and he surely meant to include himself), ‘have never written a song or a choral work without at least a line being instantly matched with a musical equivalent on the very first reading of the words.’ That ‘initial excitement’ he went on, brought ‘the intellect into play to carry the emotion to its end’.

There was of course more to it than that. Finzi was a serious man who took a composer’s task responsibly. When William Rutland’s Life of Hardy was published in 1938, Finzi singled out the following sentence to illustrate why, as he said, ‘I have always loved him so much and from earliest days responded, not so much to an influence, as to a kinship with him. (I don’t mean kinship with his genius, alas, but with his mental make-up.)’ That sentence reads: ‘The first, manifest characteristic of the man who wrote The Dynasts is his detestation of all the useless suffering that fills the world; and the thought that it is unnecessary is to him a nightmare. This was the long tribulation of Hardy’s life.’ Elsewhere Finzi wrote, about why a composer chooses a text, that ‘the first and last thing is that a composer is (presumably) moved by a poem and wishes to identify himself with it and share it’.

Three shared subjects stand out. The futility of war, the pressure of passing time, and the world’s natural beauty and indifference to man. Perhaps to these should be added the accident of chance in a man’s life (Hardy and Finzi both being agnostics), and the power of memory to crystallize the past.

Finzi was a slow worker, and he preferred to wait until he had collected enough songs to make a balanced set of ten, rather than to publish single songs which, he thought, made little impact. As his friend Howard Ferguson wrote: ‘Even the most spontaneous-sounding song might have involved endless sketches, with possibly a break of years between its opening and closing verses’ (an example of this is ‘It never looks like summer here’). So the songs in each set cover a spread of years and are not always possible to date exactly.

Only the earliest group, A Young Man’s Exhortation, is a cycle, and even that has no narrative—unlike Die schöne Müllerin or Winterreise. The thread is an emotional one, linking the young idealist as he matures to his gentle end under the yellowing trees. Over the first five songs Finzi set the quotation in Latin, ‘In the morning it flourisheth, and groweth up’ (but even by song 4 the singer is imagining his own past obscurity) and over part II ‘In the evening it is cut down, and withereth’. The first song begins lyrically, with imitation in the piano part, as if all set for a closed form; but it slackens into quasi-recitative for the questioning fourth verse; has a Holstian march bass at the mention of passing time, and ends (having started in A flat) on a surprising chord of E major—all characteristic Finzi procedures. The second song, apparently artless, is subtle in the way Finzi plays stress against metre to point up the words. ‘Budmouth Dears’ is deliberately more hearty, for contrast. ‘The Comet at Yell’ham’ is remote and still: poet and composer set our little human life in perspective, but without sitting in judgement. In ‘Former Beauties’ a vision, held in the memory, is re-lived. All five songs have their counterpart—in sentiment and form—in the later sets. The first complete public performance of A Young Man’s Exhortation was given on 5 December 1933 by Frank Drew and Augustus Lowe.

Earth and Air and Rain, published in 1936, was not performed complete till 2 July 1945, by Robert Irwin and Gerald Moore. In ‘Lyonnesse’ and ‘The Phantom’ Finzi has composed what might be called enhanced ballads. Both have swinging tunes which carry their narratives, but their form is modified to reflect change. Both concern Hardy and his wife Emma: his first dazzling meeting with her, his sad return to his Lyonnesse after her death. ‘The Clock of the Years’ balances both songs, musically by dramatic recitative, and in content: in it the man’s age is constant, the woman’s alters—disastrously. The final song brings acceptance of the ever-lasting cycle of the seasons.

Before and After Summer contains two of Finzi’s finest ‘vision’ images: the delicate dream-dance in ‘The Self-Unseeing’ and the urgent dissolving modulations of ‘In the Mind’s Eye’. In this set too is the improbable ‘Channel Firing’, a long dramatic piece in which, undaunted by Hardy’s immense subject and his colloquial expression of it, Finzi through-composes nine verses with only the gunfire figure and a little melodic phrase to hold them together. This set was first performed by Robert Irwin and Frederick Stone in a BBC broadcast on 17 October 1949.

The two remaining sets were gathered and grouped, after Finzi’s premature death, by his executors. The first performance of Till Earth outwears was by Wilfred Brown and Howard Ferguson on 21 February 1958. ‘The Market-Girl’ shows his parlando, conversational style at its best; here is tenderness, a humorous chuckle and—unusually—a triumphant end. In the next song the words are as cunningly disposed, but to a bitter end as passion throbs in an old body.

In the final set, I said to Love, three songs date from Finzi’s last year. ‘At Middle-Field Gate’ shows a welcome extension of his harmonic range, but, like ‘In five-score summers’, it ends in Hardy’s gloomy vein. The last two songs are more astringent. The resolution of ‘For Life I had never cared greatly’ is carried lightly. For ‘I said to Love’ Finzi found an unusual vigour and defiance which—though apparently contradicting Hardy’s words ‘We are too old in apathy!’—strike absolutely to the underlying mood of the poem. After the first performance by John Carol Case and Howard Ferguson on 27 January 1957, Vaughan Williams wrote: ‘As regards Gerald’s new songs, the first and the last hit the nail in my head right away.’