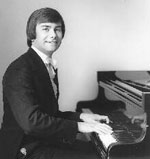 Clifford Benson was a pianist highly acclaimed for his sensitivity, outstanding musicianship and strong feeling for poetry and colour. He enjoyed a varied career of performing, recording, teaching and composing.

Mr Benson studied at the Royal College of Music in London with Lamar Crowson and Cyril Smith and was awarded the Chopin Sonata Prize and the Tagore Gold Medal as the outstanding musician of his year. With the violinist Levon Chilingirian he was First Prize-winner in the BBC Beethoven and Munich International Duo Competitions, which led to numerous collaborations with prestigious artists, to solo and chamber music recitals, and to recordings for BBC Radio 3. He was the pianist for Jacqueline du Pré master-classes on BBC2 television and appeared as a soloist and chamber pianist at the BBC Promenade Concerts. He was also a member of The Nash Ensemble for many years, playing a wide range of repertoire.

Clifford Benson performed at many major music festivals and his recitals have taken him to Europe, the Middle and Far East, the USA and Canada and more recently to Bermuda and the Caribbean. In many of these countries he has given master-classes, and in London he currently gives piano chamber music workshops at the Royal Academy of Music.

As a recording artist his many CDs include much of the flute and piano repertoire with William Bennett. Other collaborations have produced numerous recordings of English music, both vocal and instrumental, for Hyperion, and with the violinist Shlomo Mintz he he recorded Kreisler pieces for Deutsche Grammophon.

He had a number of works published, all of which have received critical acclaim. His solo piano piece 'Au revoir Sylvie' was arranged and performed at a gala concert by the BBC Concert Orchestra.