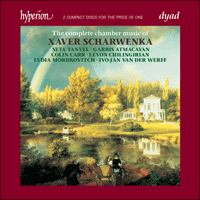 ‘These world premiere recordings of, I am inclined to say masterpieces, are superbly performed and recorded. Seta Tanyel is beautifully balanced with her colleagues bringing all of her tonal translucency and charm to even the most awkward and strenuous moments. I have seldom heard a pianist on such good terms with her instrument’ (Gramophone)

Franz Xaver Scharwenka was born on 6 January 1850 at Samter, near the Polish city of Poznan, which was then in East Prussia. Both Xaver and his older brother Philipp (1847–1917) showed early signs of musical talent and were much encouraged by their father in their first music lessons.

In 1865 the Scharwenka family moved to Berlin where the two brothers were enrolled at Theodor Kullak’s Neue Akademie der Tonkunst. Xaver made rapid progress, studying the piano with Kullak himself, a pupil of Carl Czerny, and composition with Richard Wuerst who in turn had studied with Mendelssohn in Leipzig. This formal musical education, together with his own natural ability and dedication, ensured Scharwenka’s success as both pianist and composer, and in 1869, a year after his pianistic debut at the Berlin Singakademie, his first compositions were published. Before 1874, when he took up a career as a travelling virtuoso, he had already been on Kullak’s teaching staff for some five years as professor of piano, and the experience thus gained was to prove invaluable in later years when he turned his attentions more to teaching, opening his own conservatory in Berlin in 1881, and subsequently a branch in New York in 1891 following his successful American debut. By the middle of the 1890s that institution had become one of the world’s largest, universally acknowledged as offering the highest quality of musical education.

It was the outbreak of war in 1914 which forced Scharwenka’s retirement from the international concert platform after some forty years, during which time he had achieved the highest reputation worldwide, not only as a pianist of exceptional quality but also as a fine all-round musician, receiving numerous decorations and orders from most of the crowned heads of Europe, as well as many honours from various educational institutions. The last few years of his life were spent in semi-retirement in Berlin, where he died, a much respected man, in December 1924.

Scharwenka’s reputation as a composer must surely rest with his four piano concertos and his large and varied output for piano solo, although he also wrote a symphony and had considerable success with his opera Mataswintha. By contrast, his chamber music was, in his own opinion, of lesser importance, although it is perhaps worth mentioning that, with the exception of the Serenade for violin and piano, Op 70, the other works in this genre (piano quartet, two piano trios, violin sonata and cello sonata) are substantial and, perhaps predictably, all include the piano.

Both the Piano Trio in F sharp minor, Op 1, and the Violin Sonata in D minor, Op 2, were probably conceived whilst Scharwenka was still studying at Kullak’s Academy, although the young composer was quick to attract sufficient attention for Breitkopf und Härtel, the famous German music-publishing house, to accept these early compositions, which duly appeared in print in 1869. Dedicated to his brother Philipp, the trio is respectably conservative both in structure and content, as may be expected from a student work, and follows the usual four-movement pattern, with a short ‘Adagio sostenuto’ introduction preceding the main first movement ‘Allegro con brio’. The second movement, ‘Andantino quasi Allegretto’, has an almost Schubertian quality, whilst the scherzo, with its contrasting trio section, together with a decisive finale, indicates how strong an influence the music of Schumann was to Scharwenka during his early years.

Although published simultaneously with the Opus 1 trio, the Violin Sonata in D minor, Op 2, shows a distinct advance in Scharwenka’s musical development and also bears evidence of his ever-increasing confidence and assuredness as a composer. Once again Schumann’s presence is still quite strongly felt, but Scharwenka is here less restricted by the requirements of classical conformity, resulting in a work which is naturally more fluent, and in which the thematic content is more fully and effectively developed. As with the trio, a short ‘Adagio sostenuto’ introduces the first movement ‘Allegro appassionato’, which is characterized predominantly by a restless and impulsive energy, with only occasional respite being offered by way of the more lyrical second subject. The second movement, ‘Romanze’, is a perfect centrepiece for the sonata with its intimate lyricism and quiet simplicity contrasting well with the excitement of the outer two movements. The finale, ‘Presto agitato’, hurries on impetuously, culminating in a triumphant conclusion in the tonic major.

Both the Piano Quartet, Op 37, and the Piano Trio No 2, Op 45, are mature products of Scharwenka’s most prolific period of creativity, dating from between 1876 and 1878. The Monthly Musical Record for April 1878 reports: ‘At the Chamber Concert at the Royal Academy of Music on the 5th March, Herr Scharwenka played his own quartett in F, his co-executants being Herren Peiniger (violin), Holländer (viola), and Van Biene (cello). The quartet was first introduced to an English audience, we believe, by Mr. Dannreuther, at a recent concert at his own house [3 January 1878], and the good impression then and there created by it was strengthened and deepened by a second hearing. It is unquestionably an artistic and effective work, especially as interpreted by the composer himself, who is a brilliant executant, phrasing with neatness and finish, and presenting the ideas of the composition with more than ordinary intelligence and power’.

In both of these works, the piano is given much prominence, and requires a virtuoso performer. The strings, however, are not merely given the job of accompanying, and in many places have to provide the main thematic material against the energetic piano writing. Both works are cast in the traditional four movements and in each instance Scharwenka places a rather extensive slow movement in second place, following with the scherzo movements in third. Whilst the fourth movement of the quartet has some textural similarity to that of the second piano sonata, Op 36, which was composed at about the same time, and in general reflects the influence of German romanticism in Scharwenka’s musical upbringing, the finale of the trio, by contrast, bears distinct evidence of the composer’s Polish character.

During the nine or so years between the publication of his first compositions and the appearance of the Cello Sonata in E minor, Op 46a, Scharwenka had established his reputation and reached full maturity as a creative artist. The sonata is jointly dedicated to his friends and former fellow-students at Kullak’s Academy, the brothers Heinrich and Alfred Grünfeld. Like Scharwenka, Heinrich Grünfeld had remained at the Academy where he taught the cello, and the two of them had joined together with the violinist Gustav Holländer to produce chamber music subscription concerts in Berlin during the years 1871 to 1881. Expansive melodic writing, infused with a new, more deeply-felt sense of romanticism, together with a more natural and effective integration of the two instrumental parts, are the main features of this work, setting it apart from the earlier examples. A rather dark opening theme, ideally suited to the cello, sets the mood and dominates much of the first movement. The Andante provides a somewhat surprising change of direction, beginning with a chorale-like passage which gives way to a rather Brahmsian centre section before returning and ending the movement on a note of tranquil calm. The finale, in E major, provides a contrasting affirmative conclusion. Such was the success of the work that Scharwenka arranged it for violin and piano, and also made an arrangement of the slow movement for string orchestra with harp and organ. Some twenty-five years later, along with a number of his other works, he made a thorough revision, making some small cuts and rewriting several passages, and it is this version that is recorded here.

The Serenade for violin and piano, Op 70, dates from 1895 when Scharwenka was based in the USA and, perhaps surprisingly, is the only example he left of the short ‘salon’ instrumental piece. It was dedicated to his brother’s wife, Marianne (née Stressov), a violinist who also taught at the Scharwenka Conservatory. In a simple A-B-A form, the mood is essentially lyrical and expressive and is typical of a genre very popular at the turn of the century.

These works possess energy, rich melody, harmonic interest and strong rhythm—qualities for which Scharwenka was renowned as a composer, and their revival after so many years of unjust oblivion is long overdue.