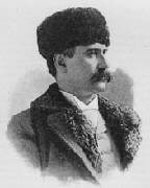 born: 6 January 1850
died: 8 December 1924
country: Poland
Franz Xaver Scharwenka was born on 6 January 1850 at Samter, near the Polish city of Poznan, which was then in East Prussia. Both Xaver and his older brother Philipp (1847–1917) showed early signs of musical talent and were much encouraged by their father in their first music lessons.

In 1865 the Scharwenka family moved to Berlin where the two brothers were enrolled at Theodor Kullak’s Neue Akademie der Tonkunst. Xaver made rapid progress, studying the piano with Kullak himself, a pupil of Carl Czerny, and composition with Richard Wuerst who in turn had studied with Mendelssohn in Leipzig. This formal musical education, together with his own natural ability and dedication, ensured Scharwenka’s success as both pianist and composer, and in 1869, a year after his pianistic debut at the Berlin Singakademie, his first compositions were published. Before 1874, when he took up a career as a travelling virtuoso, he had already been on Kullak’s teaching staff for some five years as professor of piano, and the experience thus gained was to prove invaluable in later years when he turned his attentions more to teaching, opening his own conservatory in Berlin in 1881, and subsequently a branch in New York in 1891 following his successful American debut. By the middle of the 1890s that institution had become one of the world’s largest, universally acknowledged as offering the highest quality of musical education.

It was the outbreak of war in 1914 which forced Scharwenka’s retirement from the international concert platform after some forty years, during which time he had achieved the highest reputation worldwide, not only as a pianist of exceptional quality but also as a fine all-round musician, receiving numerous decorations and orders from most of the crowned heads of Europe, as well as many honours from various educational institutions. The last few years of his life were spent in semi-retirement in Berlin, where he died, a much respected man, in December 1924.