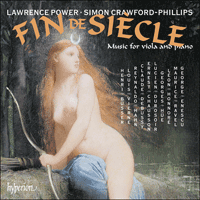 That the names of Hüe and Büsser are now largely forgotten is no reflection on their ability to write music which cannot fail to delight (and did not fail to win the Prix de Rome). Lawrence Power and Simon Crawford-Phillips present a wonderful recital which sets Ravel and Debussy in the context of their lesser-known contemporaries.

‘The players’ enthusiasm is self-evident, and Power tempers his sweet, full-throated tone … with a lovely inwardness in the quieter music. Crawford-Phillips is very much on the same page; the pair phrase naturally together’ (Gramophone)
‘Power and Crawford-Phillips are a superb duo, matching their depth and richness of tone with an energetic, passionate approach, and the warm recorded sound lets them shine’ (BBC Music Magazine)» More

‘None could ignore the viola’s propensity for melancholy, and Power’s capacity for spinning seamless melodies is as crucial to these stylish performances here as his and Crawford-Phillips’s virtuosity’ (The Guardian)» More

Henri Büsser (1872–1973) had a distinguished career within the French musical establishment. Following studies at the École Niedermeyer and then at the Paris Conservatoire with Franck (organ) and Guiraud, Gounod and Massenet (composition), Büsser won the Prix de Rome in 1893. With the backing of Gounod, he became organist of Saint-Cloud. He was appointed to the staff of the Paris Conservatoire in 1904, and became one of the composition professors in 1931. As a composer, Büsser is best known for his stage works, such as his ballet La ronde des saisons (1905) and his opera Colomba (1910).

As with a number of works included in the current collection, Büsser’s Appassionato in C sharp minor for viola and piano (1910) is dedicated to Théophile Laforge (1863–1918), who became the first professor of viola at the Paris Conservatoire in 1894. Laforge encouraged contemporary composers to write solo works for the viola, and regularly included these in the syllabus requirements for his Conservatoire class. Firmly grounded in the tradition of the romantic, nineteenth-century miniature, the agitated outer sections, marked by their syncopated rhythms and furious piano part, are contrasted by a lyrical middle section.

Thème varié (1907) was dedicated to Pierre Monteux. Although most famous as a conductor—he directed the notorious premiere of Stravinsky’s Rite of Spring in 1913—Monteux was also a talented violist and, along with Maurice Vieux, another leading pupil of Laforge. Thème varié is a substantial work, cast in an extended theme-and-variation form. It calls for demanding, virtuosic playing from both the pianist and the violist, including frequent runs, fast passage-work, double-stops and tremolando passages. The work is essentially tonal, but embraces the contemporary trend for extended harmonic writing.

Reynaldo Hahn (1874–1947) was one of the best-known salon musicians of the fin de siècle. A naturalized French composer of Venezuelan birth, Hahn first rose to prominence as a child prodigy. During the fin de siècle, he concentrated on the popular genre of the French song, or mélodie. As a talented pianist with a fine baritone voice, he often accompanied himself in performances of his own compositions. He became a close friend of Marcel Proust. Although he was over the age limit for military conscription, Hahn volunteered for the French army and saw active service during the First World War. After the war, he achieved considerable success as a composer, completing such large-scale works as his operas Ciboulette (1923), Mozart (1925) and Le marchand de Venise (1935), and his Piano Concerto (1930). Hahn was of partly Jewish descent, and his music was banned during the Occupation; he spent several years in hiding before settling in Monte Carlo. He returned to Paris after the Second World War, and spent his final years as director of the Paris Opéra.

Soliloque et forlane was composed in 1937. It is dedicated to Maurice Vieux, Laforge’s protégé and successor as viola professor at the Paris Conservatoire. With its inclusion of a forlane, a baroque dance form favoured by French composers, Hahn’s work fits with wider neo-baroque trends. The work consists of two contrasting sections, Andante and Allegro scherzando, which are unified by the common key of E minor. The playful nature of the scherzando section is evoked through staccatos and pizzicatos, fast runs, and frequent double-stopping in the viola part, which also lend the music its virtuosic character.

Claude Debussy (1862–1918) is one of the best-known of all French composers. A child prodigy, he entered the Paris Conservatoire at the age of ten, where he studied composition with Guiraud, the piano with Marmontel and the organ with Franck. He won the Prix de Rome in 1884. Debussy achieved success with his orchestral work Prélude à l’après-midi d’un faune, after poetry by Stéphane Mallarmé, in 1894. A great musical innovator, Debussy created an individual compositional voice, which drew upon modality, whole-tone, pentatonic and octatonic scales, parallel chords, unprepared modulations and formal experimentation.

Beau soir (‘Beautiful evening’) was originally composed as a mélodie, with poetry by Paul Bourget (1852–1935), in 1877–8, when Debussy was still a teenager. In this recording the viola takes the vocal line. Although an early work, in typical Debussy fashion it is harmonically adventurous. The piano part contains instances of parallel chords, which would become a hallmark of Debussy’s later style.

Ernest Chausson (1855–1899) came late to music, after completing his initial studies in law and qualifying as a barrister. He studied with Massenet at the Paris Conservatoire. Despite his early interest in Wagner—even spending his honeymoon in Bayreuth—Chausson became a fervent member of the Franck circle. In common with many contemporary French composers, he sought to free French music from Wagnerian influence by turning to the baroque, particularly to the music of Couperin and Rameau. Although Chausson died prematurely, in a cycling accident at the age of only forty-four, he left a significant body of music spanning many different genres.

Pièce for cello or viola and piano was composed in 1897. Cast in a tranquil C major, the main theme is elaborated and developed throughout the work. Contrast is created through the inclusion of sections in varying pulses and keys. The piano and viola share melodic interest and also imitate each other’s lines. The opening theme returns in the coda.

Léon Honnoré (1859–after 1901) is now a very obscure composer, and his date of death remains unclear. His Morceau de concert for viola and orchestra or piano was composed in 1890, and dedicated to Laforge. The work was chosen as the set piece for the viola concours (or competition) at the Paris Conservatoire in 1904. These annual competitions existed for all Conservatoire classes, and prizes were awarded to the best performing students. In common with the majority of contemporary works originally conceived for solo instrument and orchestra, and also with those chosen for Conservatoire concours, the piece is designed to showcase the violist’s technical mastery. The juxtaposition of sections with different keys, tempos and characters provides contrast throughout the work.

Louis Vierne (1870–1937) is best known as an organist and composer for his own instrument. Vierne was born blind; his sight was partially restored when he was six years old, although it remained very poor. He studied the organ with Franck and Widor at the Paris Conservatoire, and won his premier prix in organ in 1894. In 1900 Vierne was appointed as titular organist at Notre Dame Cathedral. He died of a heart attack while giving an organ recital at Notre Dame. Although Vierne wrote works in many different genres, his organ compositions, particularly the six organ symphonies, remain the best known.

The Deux pièces were composed in 1894–5, and they fit within the nineteenth-century tradition of pictorial miniatures. In the first piece, ‘Le soir’ (‘The evening’) in F major, tranquillity is evoked through the slow tempo and the viola’s serene melodic lines. In the nostalgic second piece, ‘Légende’ in D minor, the imitative writing between the viola and the piano is reminiscent of the baroque, which wielded a heavy influence on fin de siècle French composers. It also recalls Vierne’s primary occupation as an organist, as do the chordal writing and close harmony which mark the piano part.

Lucien Durosoir (1878–1955) was one of the best-known concert violinists of the fin de siècle. He studied the violin in Germany with Joseph Joachim and Hugo Heermann. He enjoyed a brilliant solo violin career, introducing French repertoire by such composers as Saint-Saëns, Widor and Fauré to Austro-German audiences. At the outbreak of the First World War, Durosoir was conscripted into the French army. During the war, under the protection of General Charles Mangin, Durosoir joined a group of musicians, which also included André Caplet and Maurice Maréchal, to form the chamber ensemble, the ‘Quintette du Général’. This ensemble presented many military concerts. An accident shortly after the war ended Durosoir’s concert career, and he turned to composition, choosing to live in South-West France rather than Paris. As a composer, he concentrated on chamber music.

Vitrail (French for ‘stained glass’, 1934) demonstrates the deeply personal compositional voice which Durosoir developed throughout the interwar period; consciously cutting himself off from Paris’s musical world. Although Durosoir’s music has been described as remaining firmly grounded in the nineteenth century, Vitrail—with its polyrhythms, adventurous and often unresolved harmony (which recalls Debussy), and use of extended performance techniques, including harmonics, muted passages and pizzicato—demonstrates his more experimental writing.

George Enescu (1881–1955) was a Romanian composer and conductor, and also one of the leading violinists of his generation. He commenced his studies at the Konservatorium der Gesellschaft der Musikfreunde in Vienna in 1888, and made his debut as a performer in Slănic (Romania) in 1889. In 1895 Enescu moved to Paris to study composition with Massenet and Fauré at the Paris Conservatoire. Enescu divided his time between France and Romania, and between performance and composition. As a performer, he appeared regularly with Alfred Cortot, Jacques Thibaud and Pablo Casals.

Enescu’s Concertstück was composed in 1906 in response to a commission from Fauré for a work for the annual viola concours at the Paris Conservatoire. As with Büsser’s Appassionato and Honnoré’s Morceau de concert it is dedicated to Théophile Laforge and was designed to challenge the students’ technique. Thus the work again calls for virtuosic playing which combines frequent furious runs and double-stops with demanding lyrical writing. Unlike the vast majority of pieces composed for competitions, the Concertstück has established itself in the viola repertoire.

Alongside Debussy, Maurice Ravel (1875–1937) became one of the most influential French composers of the fin de siècle and twentieth century. Ravel was born in Ciboure in the French Basque. Although his family moved to Paris when he was just three months old, Spanish exoticism remained important to Ravel throughout his life. In 1889 he entered the Paris Conservatoire, where he studied piano with Bériot and composition with Fauré. Ravel’s failure to win the Prix de Rome on five occasions between 1900 and 1905 (he did not enter in 1904), despite the quality of his music, caused a national scandal, which became known as the ‘Affaire Ravel’. Nevertheless, he found success, not least with his piano music, which includes the Sonatine (1903–5), Miroirs (1905), Gaspard de la nuit (1908), Valses nobles et sentimentales (1911) and Le tombeau de Couperin (1914–17). Determined to enlist, though initially rejected on the grounds of age and health, Ravel served as an army lorry driver during the First World War.

Kaddisch is the first of Ravel’s Deux mélodies hébraïques, composed in 1914 for the soprano Alvina Alvi, with whom Ravel gave the first performance in June that year. Originally composed as a mélodie, Kaddisch sets the Aramaic text of a traditional Jewish prayer. In this recording the viola takes the vocal part. The frequent melismas and largely static piano accompaniment evoke Jewish liturgical chant.