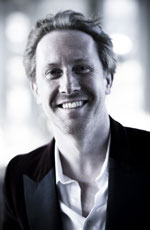 Simon Crawford-Phillips is a founding member of the Kunsgbacka Trio. He also performs regularly in a piano duo with Philip Moore, and in collaborations with Alison Balsom, Emily Beynon, Colin Currie, Martin Fröst, Daniel Hope, Andrew Kennedy, Jakob Koranyi, Pekka Kussisto and Lawrence Power. These have led to concert tours of Australia, North and South America, China, Japan and all the major European concert halls as well as several performances at the BBC Proms. Simon has made numerous recordings, including discs of Brahms, Bowen, Hindemith and Shostakovich with Lawrence Power for Hyperion. He is a regular guest with The Nash Ensemble and the Danish, Dante, Elias and Saconni string quartets and a visitor to numerous international festivals including the City of London, Edinburgh, Mecklenburg, Oslo, Savannah and Verbier.