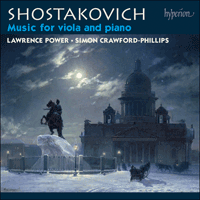 Lawrence Power makes the second of his appearances in this month’s release lists, this time with his regular pianist partner Simon Crawford-Phillips in the chamber music of Shostakovich. The centrepiece is the Viola Sonata, Shostakovich’s last completed work, premiered posthumously, on what would have been the composer’s sixty-ninth birthday. Its ravishing slow finale reworks the opening of Beethoven’s ‘Moonlight’ Sonata—a tribute to a composer he revered.

Shostakovich the film composer also takes a bow, in the form of The Gadfly, with its famous ‘Romance’ beloved of violinists everywhere. That this works just as compellingly on the viola is triumphantly displayed in the arrangement made by Vadim Borisovsky (founding violist of the Beethoven Quartet), one of the Five Pieces he recast from Shostakovich’s original.

Shostakovich’s 24 Piano Preludes have also proved irresistible to transcribers and here we have the seven brilliantly reworked by a pupil of Borisovsky, Yevgeny Strakhov.

THE SUNDAY TIMES CLASSICAL CD OF THE WEEK

‘A finely played programme that can be recommended with confidence’ (Gramophone)
‘Lawrence Power and Simon Crawford-Phillips embark on a musical narrative of epic proportions … a performance that shows great insight and poignancy. Framing the Sonata on this beautifully recorded disc are two extraordinarily resourceful transcriptions for viola and piano made by two of Shostakovich's contemporaries. The highest compliment that can be paid to the duo's strongly characterised performances of the Op 34 Seven Preludes is that the music sounds as if it were made for these instruments’ (BBC Music Magazine)
‘This fine Shostakovich CD … Power and Crawford-Phillips are eloquent interpreters, spare as well as generous in expressing the work's pervasive melancholy’ (The Observer)
‘Ever since Lawrence Power emerged several years ago as one of the world's finest exponents of the viola I have wanted him to record Shostakovich's masterly viola sonata, his last completed work. This new recording fulfils all of my expectations … such is the extraordinary nature of this sonata that it does not respond to any kind of superficial treatment, and Power's performance is, on balance, the most penetrating I have ever heard’ (International Record Review)
‘Power and Crawford-Phillips leave us in no doubt of the stature of this final masterpiece … one of Power's most compelling recordings yet for Hyperion’ (The Sunday Times)
‘A most impressive rendering of the score's unique sound world, faithfully caught by Hyperion's engineering’ (The Strad)

Though not a string player himself, Shostakovich enjoyed associations with some of the most stellar Soviet exponents, including David Oistrakh and Mstislav Rostropovich, for each of whom he composed two magnificent concertos. The violists in his life are rather less familiar, at least in the West. They include Vadim Vasilyevich Borisovsky (1900–1972), founding violist of the Beethoven Quartet, and his pupils Yevgeny Vladimirovich Strakhov (1909–1978), prominent pedagogue and orchestral soloist, and Fyodor Serafimovich Druzhinin (1932–2007), dedicatee and first performer of his last completed work, the Sonata for viola and piano.

Strakhov studied with Borisovsky at the Moscow Conservatory in the 1930s, and taught at the same institution from 1936 until his death. He played in the Moscow Philharmonic Symphony Orchestra from his student days, and in the 1950s became soloist and section leader in the USSR State Symphony Orchestra. Among his hundred or so arrangements is one of Shostakovich’s Cello Sonata, as well as the seven piano preludes here recorded.

The twenty-six-year-old Shostakovich composed his set of 24 Preludes between 30 December 1932 and 2 March 1933, roughly six years after his previous solo piano pieces, the Aphorisms, Op 13. Their directness and sharply defined characters are surely indebted to the huge amounts of music for stage and screen he had composed in the intervening years. At the same time, they showcase his newly evolving neoclassical style, already more than halfway towards the obligatory moderated language he adopted from the Fifth Symphony (1937) onwards. More practically, they served as vehicles for his own appearances as pianist. Since the first Chopin competition in 1927, where Shostakovich made a strong impression but was not among the top prize winners, he had given up thoughts of a solo performing career. But he continued to perform his own music, and from the late 1940s he also recorded much of it, including twelve of the Op 34 Preludes.

Strakhov’s transcriptions may not be as well known as those by Dmitry Tsïganov for violin and piano, but they are no less resourceful. The pieces are transposed to suit the configuration of the viola, which is generally allocated the main thematic lines (though the fast waltz, No 15, effectively reverses the roles). The French titles are the transcriber’s—the originals give initial tempo indications only—though they take hints from Shostakovich’s notation when the character is less than obvious. The ‘Mélodie amoureuse’, for instance, picks up the ‘amoroso’ marking for the melody beginning in the third bar. The composer’s own recorded performance of this prelude goes a step further, suggesting tipsy strumming in a late-night bar—a mood deliciously enhanced in Lawrence Power’s interpretation.

The Viola Sonata was Shostakovich’s last work, and there is good reason to suppose that he knew it would be. He composed the greater part of it in June and July 1975 and died, of lung cancer, on 9 August. Following his own wishes, the Sonata was first performed by its dedicatee Fyodor Druzhinin, violist of the Beethoven Quartet (in succession to Borisovsky), who played it in private on 25 September, which would have been the composer’s sixty-ninth birthday, and in public on 1 October to a packed audience in the Small Hall of the Leningrad Philharmonic. On that occasion Druzhinin acknowledged the standing ovation by holding the score aloft.

In consultations with Druzhinin during the process of composition, Shostakovich described the first movement of the Sonata as a ‘novella’, perhaps in recognition of its free-flowing three-part form. Here, as in many of his late works, atmosphere and tension are generated by the friction between twelve-note themes (as at the piano’s first entry) and images of pure diatonicism (such as the bare perfect fifths of the viola’s opening statement, which metastasize into perfect-fourth two-note chords at the end of the movement).

The scherzo-like second movement recycles the opening music from Shostakovich’s abandoned wartime opera on Gogol’s The Gamblers, a tale of card-sharps duped by their intended victim. In character this move­ment begins halfway between a polka and a quick march; the later stages are newly composed.

Most thought-provoking of all is the Adagio finale, which takes as its starting point the bleak viola lines from the middle of the second movement. As the finale gets under way Shostakovich paraphrases the famous opening movement of Beethoven’s ‘Moonlight’ Sonata, drawing attention to the kinship between its repeated-note motif and his own favourite funereal intonations. At the heart of this movement is a passage of extreme austerity built on note-for-note quotations, mainly found in the piano left-hand part, from Shostakovich’s Second Violin Concerto and all fifteen of his symphonies in sequence. There could scarcely be a clearer indication that he knew—or at least suspected—that this would be his last work. On the last page the clouds clear, allowing yet another self-quotation to come through; this is the main theme of the early Suite for two pianos, Op 6, a work dedicated by its sixteen-year-old composer to the memory of his recently deceased father. The ‘radiance’ (the composer’s own description) of this transfigured C major, with its strong autobiographical associations, recalls the conclusion of Andrey Tarkovsky’s famous science-fiction film Solyaris (1972), where the main character is reunited with his dead father on the mysterious inter-planetary entity that has the power to realize the subconscious desires of those who contemplate it.

From the time of his first public successes as a student until near the end of his life, Shostakovich wrote regularly for the cinema. It was an activity he occasionally complained about, but it provided a good income, especially when official disgrace stripped him of other means of financial support.

The Gadfly (1955) was an adaptation of a novel by the English writer Ethel Voynich, concerning the activities of an Italian revolutionary, Arthur, in the 1830s and ’40s who acquires the nickname Gadfly by having become a thorn in the flesh of the authorities. The film’s director Alexander Faintsimmer is better known for Lieutenant Kijé, and Shostakovich’s score rivals Prokofiev’s in its melodic directness and memorability.

Borisovsky’s five arrangements begin with the portentous music entitled ‘The Cliff’, composed in updated Russian national style. This is taken from the opening scene in the film, where the revolutionaries survey their homeland from a windswept cliff-top. The ‘Intermezzo’ conflates three movements associated with scenes in the cathedral. These originally featured the organ and were tinged with irony, since the Church is firmly on the side of repression and Arthur is tricked into betraying his comrades in the confessional. The piquant ‘Barrel-Organ Waltz’ originally accompanied Arthur walking through a town square some years later to a meeting with the Revolutionary party. The undoubted hit in the film is the ‘Romance’, originally entitled ‘Youth’ and depicting the young Arthur’s revolutionary fervour (rather than, as commonly assumed, his love for Gemma, the main heroine in the drama); its use as the theme-tune for the British TV spy drama Reilly, Ace of Spies helped to spread its fame to the West. Lev Atovmyan’s suite of twelve numbers from the total of twenty-four in the film, on which Borisovsky based his transcription, conflates this movement with ‘A Slap in the Face’, where Gemma discovers that Arthur has inadvertently betrayed the revolutionary movement. Equally attractive is the ‘Folk Festival’, again originally set in the town square. This adopts the folk-celebratory tone that was a more or less compulsory skill for Soviet composers, one Shostakovich had already mastered in the finale of his Symphony No 10 in 1953 and in his Festive Overture the following year.