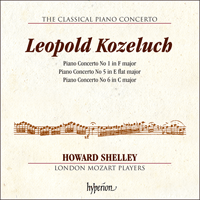 Leopold Kozeluch—another composer-pianist trying to make his way in 1780s Vienna—has not been treated kindly by posterity, suffering that posthumous obscurity shared by so many of Mozart’s contemporaries. But his brand of Rococo galanterie, much in evidence in these three piano concertos, is guaranteed to delight, especially in such affectionately attentive performances as these.

‘It’s impossible to imagine more compelling performances of this music—Howard Shelley is truly a rescuer of lost musical souls’ (Gramophone)
‘Howard Shelley and the London Mozart Players make a persuasive case for his Piano Concertos Nos 1, 5 and 6, where classical refinement and ebullience go hand in hand’ (Financial Times)» More

‘The London Mozart Players play beautifully, under Shelley’s direction … praise to Howard Shelley’s broad musical curiosity for pursuing this little-known music’ (MusicWeb International)» More
‘Howard Shelley is as persuasive a soloist as one could wish for, bringing a limpid delicacy to the slow movements and a tempered brilliance to the outer movements that makes the most of their fantasia-like developments  … ornamentation is discreet and stylish, as are the accompaniments, the London Mozart Players in their element, with the orchestral tuttis always pert and finely shaded’ (The Europadisc Review)» More
„Die drei Werke dieses Programms sind elegante und sehr verspielte, etwas geschwätzige Konzerte, deren Ecksätze Howard Shelley mit spielerischer Leichtigkeit recht zupackend spielt“ (Pizzicato, Luxembourg)» More

‘An admirable young composer of Vienna, whose works were first made known in England by the neat and accurate execution of Mademoiselle Paradis … in 1785. And his productions have since greatly increased in number and in favour. They are in general excellent, abounding with solidity, good taste, correct harmony; and the imitations of Haydn are less frequent than in any other master of that school.’

Dr Charles Burney’s glowing verdict on Leopold Kozeluch, in his General History of Music (1789), was widely shared in the last quarter of the eighteenth century. Vying with Mozart for the approbation of Viennese connoisseurs and amateurs, Kozeluch achieved at least equal fame as a pianist–composer. The Irish tenor Michael Kelly, who created the role of Basilio in Le nozze di Figaro, recalled in his Reminiscences (1826) how he first met Mozart at a Viennese concert ‘of the celebrated Kozeluch’s, a great composer for the piano-forte, and a fine performer on that instrument’. His renown radiated far beyond Vienna. Indeed, in 1790 the music scholar Ernst Gerber cited him as Europe’s favourite composer in his Lexikon der Tonkünstler: ‘Leopold Kozeluch is without question with young and old the most generally loved among our living composers, and this with justification.’

Variously spelt Kotzeluch, Kozeluch, Koželuh, or, in London, Kozeluck (eighteenth-century orthography was notoriously haphazard), Kozeluch was born in the Bohemian village of Velvary, near Prague, and baptized Jan Antonín. Like so many aspiring composers, Handel and C P E Bach among them, he initially hedged his bets by studying law, at Prague University. At the same time he continued his musical studies with his older cousin, also Jan Antonín, and took lessons with Mozart’s future friend František Dušek. In Prague he quickly made his mark with music for ballets and pantomimes, abandoned his law studies and in 1778 moved to Vienna, by which time he had changed his name to Leopold to avoid confusion with his cousin.

Arriving in the Imperial Capital some three years before Mozart, Kozeluch likewise wooed the music-loving Viennese aristocracy in the triple roles of pianist, composer and teacher. For a decade and more he was triumphantly successful in what Mozart dubbed ‘the land of the Clavier’. In 1781 he had no hesitation refusing an offer to succeed Mozart as court organist to Prince-Archbishop Colloredo of Salzburg. Four years later Kozeluch set up his own publishing firm, the Musikalisches Magazin, becoming one of a new breed of composer–publishers that would include Muzio Clementi and (less successfully) Jan Ladislav Dussek. His business dealings brought him into frequent contact with British publishers; and in the following decade he developed a lucrative sideline arranging Scottish, Welsh and Irish folksongs for the Edinburgh publisher James Thomson, setting the pattern for Haydn and Beethoven after him.

Like his contemporary Antonio Salieri, Kozeluch has suffered in the mythology, as any rival to Mozart was bound to do. The fragmentary evidence suggests that he was a stubborn character (not least in his dealings with Thomson) and a shrewd political operator who knew his own worth. In a letter of 1809 to Thomson about his own folksong arrangements, Beethoven famously derided Kozeluch as ‘Miserabilis’, at a time when the Bohemian’s music had dropped out of fashion. We should, though, take with several pinches of salt the widely circulated stories of Kozeluch slandering Mozart’s ‘moral character’, or criticizing a piece of Haydn’s in Mozart’s presence, to the latter’s indignation.

In the insecure and competitive musical climate of Vienna in the 1780s, there was inevitably mistrust between Kozeluch and Mozart. But the two men shared friends and acquaintances, and were sometimes present at each other’s concerts. In July 1789 Mozart informed his creditor and fellow-Freemason Michael Puchberg that he was composing sonatas and quartets for the Princess and King of Prussia ‘which I am going to have engraved at my own expense, at Kozeluch’s’—though in the event the ‘Prussian’ quartets were published, posthumously, by the firm of Artaria. Five years earlier Mozart had composed the B flat major concerto K456 for Kozeluch’s most prestigious pupil, the blind pianist and composer Maria Theresia von Paradis (1759–1824). As Burney noted, it was Paradis’s ‘neat and accurate execution’ that first secured Kozeluch’s popularity in England.

Like Mozart, and Paradis herself, the prolific Kozeluch composed concertos for his own performance both in Vienna’s public concert halls, and in the salons of the city’s bourgeoisie and aristocracy. Twenty-two of his keyboard concertos survive, mostly written for fortepiano (rather than harpsichord) during the 1780s, when he was at the zenith of his popularity as a composer–virtuoso. Whereas only a few of Mozart’s concertos were published in his lifetime, most of Kozeluch’s quickly appeared in print—one advantage of being your own publisher. Of the three concertos on this recording—all contemporary with Mozart’s greatest piano concertos—the F major and E flat major were published by the composer in 1784 and 1785, while the C major appeared in Paris in 1786.

With Mozart setting the concerto gold standard, invidious comparisons are hard to avoid. Modestly scored for oboes, horns and strings (and thus suitable for small-scale performances), Kozeluch’s concertos conspicuously lack the melodic abundance, rich woodwind colouring and operatic-style dialogues of Mozart’s great Viennese concertos. Outside the tuttis, the orchestra tends to be used merely as a discreet backdrop to the soloist. There are few formal or harmonic surprises. Yet in their unassuming way, the Bohemian’s galant concertos—more akin to Mozart’s earlier Salzburg works, K238 and K246—beguile with their limpid grace, their sparkling keyboard writing (often in just two parts), and their sense of proportion. Kozeluch never becomes garrulous. In his lifetime he was noted for a thematic economy that often out-Haydns Haydn himself.

The opening Allegro of the Concerto No 1 in F major is a prime example of his knack for making a little go a long way. Virtually the whole movement grows from the suave opening melody, intoned by violins over a long-sustained viola note and a harmonically static ‘drum’ bass. In the orchestral tutti it turns up, gently embellished, as a ‘second subject’, before being transferred to the lower parts beneath the first violins’ excited tremolandos. When the piano enters, it varies and decorates the melody but adds no significant new theme of its own. While Kozeluch’s harmonic language remains pleasurably predictable, the long central episode—more a bravura fantasia, à la Mozart, than a thematic working-out—introduces a more impassioned note as it sweeps through a series of neighbouring minor keys.

The epitome of gracious galanterie, the B flat major Adagio is more generous melodically, with two distinct themes in the orchestral introduction, and a restlessly modulating idea that remains the soloist’s personal property. As in the other two concertos, the orchestra is here reduced to strings alone. For his finale Kozeluch writes a bounding 6/8 rondo with distant hunting associations that become more palpable when the piano’s opening theme morphs into a fanfare for oboes and horns. Amid the dancing bravura, there is a fetching, chromatically inflected new theme, introduced by the soloist. The more dramatic central episode sets out in an agitated D minor, with a variant of the opening theme, before the orchestra bluntly asserts B flat major. Characteristically, the finale ends with a full statement of the main theme from the orchestra alone rather than, as in Mozart’s and Beethoven’s concertos, a display of vote-catching bravura for the soloist.

The opening Allegro of the Concerto No 5 in E flat major is less thematically self-denying than the equivalent movement of the F major concerto. A delightfully jaunty theme, fuelled by leaping arpeggios, in the orchestral tutti is varied and expanded by the soloist, and turns up in C minor in the fantasia-like central episode. Next comes an Andante con variazioni, in which a shapely rococo melody is progressively elaborated in ever more rapid note values. Variation 5, with its surging demisemiquavers in the bass, marks a climax of complexity, before the theme emerges in its original simplicity at the start of the final variation. After the brief coda dissolves in a mini-cadenza, the finale, another 6/8 rondo, breaks in with a catchy tune that evokes hunting calls—a cue that the horns subsequently take up with enthusiasm. Again there is a close family likeness between the themes, with all the movement’s main ideas evolving from the tally-ho opening.

While there are no trumpets or drums in the orchestra, the opening of the Concerto No 6 in C major hints at the key’s traditional military associations, with fanfares in martial dotted rhythm. The strings’ elegant piano response turns out to be the germinating theme of the whole movement. As usual, though, Kozeluch is careful to ensure sufficient variety of contour, not least in a chirpy cadential theme that has more than a whiff of Haydn at his most sportive. When the opening fanfare returns after the modulating central episode—another bravura fantasia for the soloist—it acquires a touch of added grandeur with answering oboes and horns.

The sonata-form Andante, in F major, mines the same delicately ornamental vein as the other two slow movements. There is an appealing wistful pathos, too, when the opening theme appears in D minor at the start of the development. Minuet finales were popular in the 1770s and early 1780s, as exemplified by many of J C Bach’s concerto finales and Mozart’s K242 (for three pianos), K246 and K413. Kozeluch continues this tradition in the finale of his C major concerto, a rondo in form but, characteristically, monothematic in spirit. As in the first movement, everything derives from the ear-tickling opening melody, varied by the soloist as a ‘second subject’, then fruitfully recast in the C minor central episode. Typically, too, the movement ends with that neat, satisfying promptness that is such a Kozeluch hallmark.