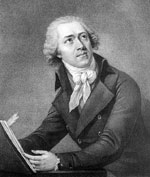 born: 26 June 1747
died: 7 May 1818
country: Czechoslovakia
‘An admirable young composer of Vienna, whose works were first made known in England by the neat and accurate execution of Mademoiselle Paradis … in 1785. And his productions have since greatly increased in number and in favour. They are in general excellent, abounding with solidity, good taste, correct harmony; and the imitations of Haydn are less frequent than in any other master of that school.’

Dr Charles Burney’s glowing verdict on Leopold Kozeluch, in his General History of Music (1789), was widely shared in the last quarter of the eighteenth century. Vying with Mozart for the approbation of Viennese connoisseurs and amateurs, Kozeluch achieved at least equal fame as a pianist–composer. The Irish tenor Michael Kelly, who created the role of Basilio in Le nozze di Figaro, recalled in his Reminiscences (1826) how he first met Mozart at a Viennese concert ‘of the celebrated Kozeluch’s, a great composer for the piano-forte, and a fine performer on that instrument’. His renown radiated far beyond Vienna. Indeed, in 1790 the music scholar Ernst Gerber cited him as Europe’s favourite composer in his Lexikon der Tonkünstler: ‘Leopold Kozeluch is without question with young and old the most generally loved among our living composers, and this with justification.’

Variously spelt Kotzeluch, Kozeluch, Koželuh, or, in London, Kozeluck (eighteenth-century orthography was notoriously haphazard), Kozeluch was born in the Bohemian village of Velvary, near Prague, and baptized Jan Antonín. Like so many aspiring composers, Handel and C P E Bach among them, he initially hedged his bets by studying law, at Prague University. At the same time he continued his musical studies with his older cousin, also Jan Antonín, and took lessons with Mozart’s future friend František Dušek. In Prague he quickly made his mark with music for ballets and pantomimes, abandoned his law studies and in 1778 moved to Vienna, by which time he had changed his name to Leopold to avoid confusion with his cousin.

Arriving in the Imperial Capital some three years before Mozart, Kozeluch likewise wooed the music-loving Viennese aristocracy in the triple roles of pianist, composer and teacher. For a decade and more he was triumphantly successful in what Mozart dubbed ‘the land of the Clavier’. In 1781 he had no hesitation refusing an offer to succeed Mozart as court organist to Prince-Archbishop Colloredo of Salzburg. Four years later Kozeluch set up his own publishing firm, the Musikalisches Magazin, becoming one of a new breed of composer–publishers that would include Muzio Clementi and (less successfully) Jan Ladislav Dussek. His business dealings brought him into frequent contact with British publishers; and in the following decade he developed a lucrative sideline arranging Scottish, Welsh and Irish folksongs for the Edinburgh publisher James Thomson, setting the pattern for Haydn and Beethoven after him.

Like his contemporary Antonio Salieri, Kozeluch has suffered in the mythology, as any rival to Mozart was bound to do. The fragmentary evidence suggests that he was a stubborn character (not least in his dealings with Thomson) and a shrewd political operator who knew his own worth. In a letter of 1809 to Thomson about his own folksong arrangements, Beethoven famously derided Kozeluch as ‘Miserabilis’, at a time when the Bohemian’s music had dropped out of fashion. We should, though, take with several pinches of salt the widely circulated stories of Kozeluch slandering Mozart’s ‘moral character’, or criticizing a piece of Haydn’s in Mozart’s presence, to the latter’s indignation.