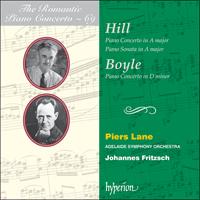 Alfred Hill and George Boyle enjoyed distinguished careers in their native Australia and abroad—Boyle’s students in New York included Copland and Barber—though both are all-too-little known today. The piano concerto and sonata by Hill—the ‘grand old man’ of Australian musical life at the time—are effectively the same work, the one an orchestral expansion of the other.

‘One cannot imagine a more persuasive, artful advocate of the music of his two compatriots than Piers Lane who, frankly, is worth hearing in whatever he plays’ (Gramophone)
‘Lane and friends make a great case for these Australian Romantic concertos. Hill's Concerto in A (a reworking of the Sonata) is particularly enjoyable with its plentiful tunes’ (BBC Music Magazine)

‘Hyperion continue their exploration of the Romantic piano concerto with an intriguing disc of Australian examples, Piers Lane making a convincing case for his countrymen’s music’ (The Guardian)» More

Alfred Francis Hill was born in 1869 in Melbourne into a musical family that later migrated to Wellington, New Zealand. His obvious talent led to studies in composition and performance from 1887 until 1891 in Leipzig, where he won the the prestigious Helbig Prize. He also played the violin in the Gewandhaus Orchestra when Brahms, Tchaikovsky, Grieg, Joachim, Reinecke, Ysaÿe, Busoni, Sarasate, Bruch, Clara Schumann and Richard Strauss visited as conductors or soloists. Such experiences meant that he was inevitably influenced by eminent Europeans.

After working as a teacher, performer, conductor and composer in New Zealand and Australia, Hill settled in Sydney in 1911; in 1916 he became the founding professor of composition at the conservatorium where he fostered young composers until his retirement in 1935. He was one of the most respected Antipodean musicians of his time and was honoured with the OBE and CMG. Alfred Hill continued composing until his death in 1960. He took a special interest in collecting Maori folk melodies, some of which were incorporated into his music. A well-researched account of Hill’s life is found in the biography A distant music: the life and times of Alfred Hill by John Mansfield Thomson. The critic Neville Cardus rightly described Hill as ‘the grand old man of Australian music’.

Hill’s output was truly enormous. Prior to the completion in 2007 of a thematic catalogue that includes more than two thousand titles, an accurate number of his works was unknown, since the composer had not allocated opus numbers nor kept a complete list. As well as the works on this recording, there are concertos for violin, viola, trumpet and horn, seventeen string quartets, nine symphonies for orchestra, overtures, tone poems, four symphonies for strings, sonatas, a variety of other chamber music, hundreds of songs and piano miniatures, ten operas, film music, choral music including some major works with orchestra and a Mass with organ, arrangements of folk music and a harmony textbook. More than two hundred of Hill’s works were published in the nineteenth and twentieth centuries, especially songs and short pieces for students. New editions of major works have recently been prepared, making much of Hill’s music widely available for the first time. Hill’s compositions feature a wealth of melody, attractive harmony, creativity, playability and audience appeal. While they hold a significant place in the musical heritage of Australia and New Zealand, these qualities ensure a universal appeal.

Alfred Hill’s Piano Concerto in A major is a reworking of the Piano Sonata also heard on this recording. This was a common practice for Hill. All but one of his symphonies originated as orchestrations of chamber works, and two of his five concertos are based on earlier sonatas, a fact that only recently came to light.

It is not known when the orchestration was made but the first performance of the concerto was given in 1941, with the Sydney Symphony Orchestra. An advertisement for this Sydney performance states: ‘Before the advent of the ABC and its orchestras, performances of major works by Australian composers were few and far between [and] a work that cried out for an orchestral setting had to be satisfied with a more modest form. Because of this [Alfred Hill’s] Piano Concerto … began as a keyboard sonata. The opportunity now offered, says Mr Hill, enabled him to render the work in its true setting. There are three movements. The concerto opens with a question. The second movement, Homage to Chopin, is cast in the form of a nocturne, and the finale [is] entitled Contrasts.’

The piano sonata, however, has four movements, and Hill added the orchestration of the second movement, Intermezzo (Fancies), for later performances. Comparison of the manuscripts of the sonata and concerto reveals a good deal of reworking, the modifications including changes of metre, revisions of harmony, omissions and substitutions of passages, and adjustments of expressive detail.

The date of composition of Hill’s Piano Sonata in A major is uncertain, but on 29 March 1920 the Sydney Telegraph reported its earliest known performance, by the pianist Henry Penn. Several other performances were reported in the 1920s. The handwriting, however, is not typical of Hill’s from this time, and suggests that it was composed rather earlier.

The introduction to the first movement, The Question, alternates between slow and fast motifs (questions and answers) before the Allegro first subject. The broad second subject leads to a rehearing of the opening ‘question’ motif as part of the development, the conclusion of which is marked by a pause. The recapitulation follows the expected sonata form, presenting the first and second subjects in the tonic key. The opening three-note motif and first-subject material are used again in the coda.

The Intermezzo, subtitled Fancies, is a miniature in ternary (ABA) form, its simplicity offering a charming contrast to the other movements. The Nocturne (Homage to Chopin), does not directly quote from Chopin’s music, but is written in a style reminiscent of him. After an expressive introduction, the theme, typical of Hill’s beautiful and poetic slow movements, is heard with varying ornamentation, and with its reprise frames a complementary central section.

The final movement, Contrasts, is once again in sonata form with two distinct subjects. The inventive development section is based largely on first-subject material. In the recapitulation each subject is briefly heard again, the second being incorporated into a coda in compound metre.

George Frederick Boyle was born in 1886 in Sydney to parents who were highly esteemed professional musicians. George was a prodigy who toured extensively in Australia and New Zealand giving piano recitals, as well as composing a number of solo and chamber works, before departing in 1905 to study for five years with Ferruccio Busoni in Berlin, never to return. He had a prestigious career in the USA teaching at Peabody Conservatory of Music in Baltimore (1910–22), the Curtis Institute of Music (1922–4), and the Institute of Musical Art (now the Juilliard School) in New York (1923–40). His students included Aaron Copland and Samuel Barber. He died in Philadelphia in 1948.

Apart from the piano concerto on this recording, Boyle’s compositions include a Ballade for solo piano (1921), a piano sonata (1925), and a suite for two pianos, as well as many smaller works. His style is essentially late Romantic, and his music contains frequent changes of tempo, key and mood, extensive chromaticism and virtuosic cadenzas, while rhythmic interest is enhanced by the frequent use of hemiolas.

George Boyle’s Piano Concerto in D minor was completed in 1911, and first performed on 29 September 1911 at Worcester Festival in Massachusetts, by Ernest Hutcheson (another Australian who was then Boyle’s colleague on the Peabody staff) with the Boston Symphony Orchestra conducted by Gustav Strube. Hutcheson then performed the concerto four times in February–March 1912 with the New York Philharmonic Orchestra. Musical America reported that it was a ‘masterly concerto that stands comparison with the best that has come out of Germany, France, Russia, and Scandinavia in a long time, and that is, indeed, saying much … Such a work should indeed have a significance for pianists of today, and should find a place in the repertoire of all serious virtuosi.’ It may be that Boyle’s piano concerto was the first substantial example of the form by an Australian composer. Boyle also prepared a version for two pianos, which was published in New York by Schirmer in 1912. It was dedicated to Harold Randolph, then the director of the Peabody Conservatory.

The Australian premiere of Boyle’s piano concerto took place in Sydney in November 1913, performed by Edith Kilminster and conducted by Alfred Hill. The Evening News reported: ‘The concerto met with considerable favour in America and it is undoubtedly original in construction. It sweeps along with a fine vim, engrossing in attention … Mr Boyle exhibits individuality and spontaneity and is never for a moment bland.’

In the opening orchestral introduction there is an insistent underlying syncopation over which three-note rising and falling phrases seem to float. The piano’s entry leads to a statement of the first subject. After a short reprise of the introductory music we then hear a contrasting section in lighter mood. The second subject is a distinctive rising then falling motif, presented first by the orchestra alone and then against a backdrop of the piano’s ornamental arpeggios. Woodwinds complete the exposition with the introductory theme. The development features virtuoso writing for the piano culminating in a cadenza. This heralds the recapitulation in a triumphant D major. In this recording the quiet conclusion leads seamlessly to the following movement. This is a reworking found in the published version for two pianos; in the original version this movement finished with a dramatic forte.

In the second movement expressive interweaving melodies from the woodwinds are answered by lush chromatic string passages, and the piano then echoes these exchanges. There follows a contrasting second section, with a hint of folk style, overlaid by delightful ornamental woodwind counter-melodies. In the coda both themes briefly merge.

In the finale energetic passages are interspersed with sometimes showy and elsewhere expressive solo piano passages, providing an alternation of tension and relaxation. Several themes are heard, offset by virtuosic cadenzas that extensively develop the thematic material. In several places the introductory motif from the first movement reappears and there is also a quote from the middle movement, tying the work together as a cohesive whole. A showcase for the pianist, Boyle’s concerto is full of colour and variety of mood.