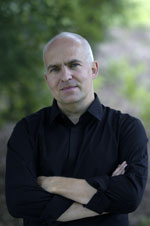 Johannes Fritzsch was born in Meissen, Germany, in 1960. He received his first musical tuition in piano and organ from his father, a cantor and organist. He also studied the violin and trumpet. He received higher education at the Carl Maria von Weber Music Academy in Dresden, majoring in conducting and piano.

In 1982, after completing his studies, Johannes Fritzsch was appointed second Kapellmeister at the Volkstheater in Rostock. In 1987 he accepted the position of Kapellmeister with the Staatsoper Dresden, Semperoper, where he conducted more than 350 opera and ballet performances over five years. After the German reunification, Johannes Fritzsch was able to accept engagements outside of Eastern Europe. In 1992–3 he worked as first Kapellmeister at the Staatsoper Hannover. He was appointed Chief Conductor and Artistic Director at the Städtische Bühnen in Frankfurt am Main and the Philharmonisches Orchester in Freiburg, where he remained until 1999 and enjoyed widespread acclaim.