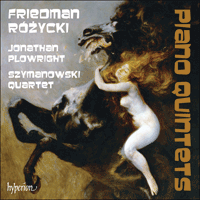 After his outstanding recording of the piano concertos, Jonathan Plowright—here partnered by the Szymanowski Quartet—returns to the music of Ludomir Różycki. The piano quintets of Różycki and Ignacy Friedman make the perfect late-Romantic pairing, especially when performed by such committed champions of Polish music.

‘[Jonathan Plowright] is this outstanding British pianist in whose debt we are once more for this second Różycki resurrection … the excellent Szymanowski Quartet [exploits] to the full Friedman’s civilised five-way conversation’ (Gramophone)
‘Full of style and grace’ (The Strad)» More
‘Superb playing is matched by fine engineering in the atmospheric acoustic of Potton Hall. Greatly recommended—you won’t regret it!’ (Classical Ear)» More

‘The performances are everything one could wish for. Jonathan Plowright is a splendid pianist who has done much to champion this out-of-the-way Polish repertoire and the Szymanowski Quartet could hardly be bettered’ (MusicWeb International)
‘Everything coheres, there is natural rubato, when needed power, propulsion, exceptional sweep and the ability to let the music sing’ (Audiophile)» More

‘Plowright and his colleagues truly rise to the occasion … in short, these superb musicians have given us a worthy and important follow-up to their 2012 release featuring the Juliusz Zarębski and Władysław Żeleński quintets’ (Classics Today)» More
‘The piano quintets of Różycki and Ignacy Friedman make the perfect late-Romantic pairing, especially when performed by such committed champions of Polish music’ (The Northern Echo)» More
‘A real discovery, that makes you want to investigate further … Jonathan Plowright (masterly) and the Szymanowski Quartet (including an alluring cellist) give very persuasive readings of these hugely rewarding Piano Quintets’ (Classical Source)» More
«Une délectable double découverte» (Diapason, France)» More

A glance at the history of quintets for piano and string quartet might suggest that this was one of the rarer genres of chamber music. A few familiar names dominate the recorded repertoire: Schumann, Brahms, Dvořák and Franck, with a smattering of twentieth-century contributions by Fauré, Elgar and Shostakovich. Yet the tally of lesser-known piano quintets is much greater: over sixty were composed in the nineteenth century and around a hundred across the twentieth century. Among them are several by Polish composers, including Juliusz Zarębski’s masterpiece (1885, issued on Hyperion CDA67905). The quintets by Ludomir Różycki (1913) and Ignacy (Ignaz) Friedman (1918) are part of this larger picture.

Both composers were born in partitioned Poland: Różycki (1883–1953) in Warsaw in the Russian sector, Friedman (1882–1948) near Kraków in the Austrian zone. Their paths crossed in Berlin, during the Great War, by which time Różycki was becoming one of the major figures in Polish music while Friedman had already made his mark internationally as a pianist, following in the footsteps of another pianist–composer, Ignacy Jan Paderewski. Paderewski, who was a frequent visitor to the Różycki family home, was unwittingly the cause of confusion over the date of Różycki’s birth. When he was studying in Warsaw, Różycki dodged military service in the Tsarist army by pretending he was too young. Instead of his real dates (18 September 1883) he gave Paderewski’s birthday (6 November) and the year 1884. Non-Polish sources, unaware of this ruse, still often give the wrong dates.

Różycki Piano Quintet in C minor Op 35 (1913)
Ludomir Różycki was part of ‘Young Poland in Music’, a small group of musicians that included his near-contemporary, Karol Szymanowski. Their inaugural public concert took place in Warsaw on 6 February 1906, when Różycki presented his first symphonic poem, Bolesław Śmiały (‘Bolesław the Bold’); he went on to write an opera of the same name and subsequently become one of Poland’s significant composers for the stage. Almost more important than this concert was the establishment a year earlier of the Young Polish Composers Publishing Company, centred on the members of ‘Young Poland in Music’. This had its base in Berlin, which was more receptive to their ideas than was Warsaw, and Różycki furthered his studies there with Humperdinck. After a period conducting at the opera house in Lwów (now Lviv in Ukraine), he returned to Berlin at the end of 1912 and composed in quick succession his three principal chamber pieces: the Rhapsody for piano trio (1913), Piano Quintet (1913) and String Quartet (1915).

Różycki began the Piano Quintet while on a visit to Paris in the summer of 1913, and he completed it in Berlin a few months later. It illustrates the separateness of the very different musical worlds that co-existed in Europe. There is no hint of the latest French and Russian music that had dazzled Paris a matter of weeks before his visit (Debussy’s Jeux and Stravinsky’s The Rite of Spring had been premiered by the Ballets russes in May). Nor is there any sign that Różycki was intent on exploring exotic soundworlds, as Szymanowski had done in his recent Love Songs of Hafiz. What he did share with Szymanowski in the 1900s was an immersion in the late-Romantic idioms of Richard Strauss and Reger, which in the Piano Quintet are folded in with a musical language inherited from earlier quintets, such as those by Franck and Zarębski.

All three movements are conventionally structured, although the quiet, almost surreptitious initiation of each is an unusual feature. The dipping motif exchanged briefly between piano and strings in the opening bars is integral to the first movement, along with a measured rising scale, all developed with an impassioned swagger. The winding-down to the lilting second subject introduces a gentler tone, continued into a third, low-register passage that ushers in the central, more turbulent section. The movement ends tranquillo, almost sentimentally, away from the home key.

The main theme of the second movement, introduced by muted string chords, is given by the cello, in the manner of a short recitative. Its sombre mood is refreshed when later accompanied at a slightly faster tempo by a rocking cello figure and chords on the piano marked quasi campane. When this version returns to conclude the movement, its funereal tolling becomes explicit. The cello also begins the giocoso finale, whose initially stuttering scherzando on the strings is soon marshalled by the entry of the piano. The reflective central section draws on the principal theme of the first movement and the work ends Lento in the manner of a rousing hymn.

Różycki’s quintet was first championed by a Berlin chamber group led by the cellist Marix Loewensohn, with the pianist Leonid Kreutzer. It was subsequently performed in the Berlin Secessionists’ building at Christmas 1915 during a concert devoted solely to Różycki. The performance of his String Quartet (led by the renowned violinist Carl Flesch) was followed by excerpts from his forthcoming opera Eros and Psyche and by two works involving the piano—some of his new Polish Dances for piano solo and the Piano Quintet. The pianist was none other than Ignacy Friedman, to whom Różycki dedicated the Polish Dances.

Friedman Piano Quintet in C minor (1918)
As Kraków was occupied by Austria during the partitions of Poland, it perhaps seemed natural that in 1901 Ignacy Friedman—already acclaimed as a child prodigy—should study under Leschetitzky in Vienna, where he made a notable debut in 1904. He later settled in Berlin, before moving to Denmark and Italy, from where he escaped in 1939 to end his days in Australia. Różycki, on the other hand, returned to Poland in 1919, living out the Second World War in Warsaw before moving to Katowice in 1945 to teach composition. Friedman was more travelled, a tireless performer across continents, playing with the leading conductors and chamber musicians of the day, including Mengelberg and Nikisch, Huberman and Casals. His solo repertoire was broad and he was particularly renowned for his performance of Chopin, whose complete works he edited for Breitkopf & Härtel in 1913, when he was only thirty-one.

Friedman’s own music has less of a reputation today. Among many small-scale solo pieces, often grouped in sets (three books of Polnische Lyrik, 1913–17), there are larger works, such as an arrangement of the second movement of Mahler’s Second Symphony (Tempo di Minuetto, 1913), Studies on a Theme by Paganini (1914) and Ballade (1917). Unlike Paderewski, but in company with Zarębski, Friedman wrote no works for piano and orchestra. His Piano Quintet, like Zarębski’s, is marked by its poetic tone, not by being a vehicle for keyboard virtuosity. Despite its dedication to the Austrian-born dowager Queen of Spain, Maria Christina, and being published in 1918, it languished out of hearing for many decades. That is a pity, as it is Friedman’s most substantial piece and certainly has its enticements and idiosyncracies.

There is a bravado about the opening, with its dotted rhythms and groups of four descending chromatic semiquavers. But it is the second subject that steals the limelight. Friedman contains its slow-waltzing sweetness within the timbral restraints of the ensemble, but imagined in full orchestral garb it might have stepped off the page of a recent score by Richard Strauss. After the repeat of the exposition, all three ideas contribute to the contrapuntal interplay of the development, whose prevailing mood is one of suspense and wistfulness. The waltz theme then takes over in the tonic major before the brief recapitulation of the dotted rhythms in the minor. Not to be outdone, it also crowns the closing bars.

The second movement is a theme and variations. Rather as he had done in the Paganini Studies four years earlier, Friedman distinctively separates the variations by tempo, giving them the appearance of separate miniatures. They are still connected thematically, but they are often freely extended. There are three main motifs: a little melodic turn on the piano, enclosing the darkly expressive interval of the diminished fourth, followed by a slow, non-chromatic turn on the cello and a few moments later by a third idea in regular quavers (piano, imitated by viola). Of the eight succeeding variations, several stand out. The third starts off as a lively mazurka but soon wanders in a different direction, while the fifth is conceived as a minuet. The sixth, in 9/8, has the unusual marking Barcollando, which in a musical context may be understood as ‘swaying’ and related to the barcarolle, rather than the standard dictionary definition of ‘staggering’ or ‘tottering’. Friedman follows custom with a fugue as the final variation, although true to character this gives way to sustained musings on the strings while the piano strums delicate octaves.

The last movement, Allegretto semplice, is titled Epilog, a curious although not unreasonable notion for a finale. It starts with a dancing tune that has central European inflections, maintaining its innocent air in various guises before leading to a snappier second idea. After the return of the opening melody, Friedman expertly mingles the rest of the finale, epilogue-style, with recollections from the first two movements, starting with the Larghetto. After a robust climax, the movement settles back into winsome mode, and this intriguing work ends in quiet reminiscence.