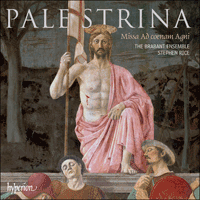 The Brabant Ensemble, better known for uncovering works by forgotten composers such as Dominique de Phinot, turns to a giant of the Renaissance—perhaps the most celebrated name of the period. Yet within Palestrina’s huge output there are many hidden gems, lacking both recordings and modern performing editions, and it is from among these that the ensemble’s director Stephen Rice has chosen the repertoire for this album. A Mass—Missa Ad coenam Agni, from Palestrina’s first book of Mass-settings—is included, plus antiphons, motets and five Eastertide Offertories. Each work is, as Stephen Rice states in his typically informative booklet notes, ‘a finely crafted addition to the liturgy’.

The Brabant Ensemble brings a matchless blend of musicianship, scholarship and sensitive singing to this glorious music. 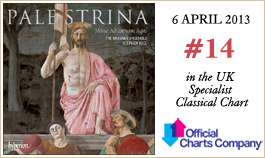 ‘The quality of the works is such that their neglect in the discography is puzzling … the Brabants seem very much at home here’ (Gramophone)
‘The singers enliven the texture with their nuanced renderings of the marvellous contrapuntal connections, and the recording makes the most of the double-choir effects in the final section’ (BBC Music Magazine)
‘Eastertide offertories, antiphons and motets from the master of Renaissance counterpoint. The spirited Surrexit pastor bonus, its accompanying antiphon Regina caeli and the gradual Haec dies are sung with a full-voiced, beefy intensity that lifts the music away from mere polite polyphony and gives it a really exciting energy’ (The Observer)

The music of Giovanni Pierluigi da Palestrina (1525/6–94) is unique among that of Renaissance composers in never having left the choral mainstream. The works of even his greatest contemporaries such as Josquin Des Prez, Orlande de Lassus, Tomás Luis de Victoria, and Thomas Tallis, all fell entirely into desuetude for many years, but Palestrina was never forgotten. In part this is due to his music’s continuing value as a pedagogical tool, especially from the time of J J Fux’s Gradus ad Parnassum (1725) onwards. In part it is due to the famous, if spurious, legend of Palestrina’s ‘saving of counterpoint’. But also it reflects the suitability of his output for all seasons of the church’s year, as well as the appropriateness of his style for performance by choirs and ensembles of all sizes and voice combinations. Palestrina has often been described as having achieved the perfect balance between the horizontal and vertical aspects of musical construction, and the enduring popularity of such works as the Missa Papae Marcelli, Missa brevis, and of a handful of motets such as Sicut cervus and Tu es Petrus, attests to the esteem in which he is held.

As is true of many famous composers in later history, this monumental stature conceals a wide variation in the reception of Palestrina’s work as a whole. He wrote one hundred and four Mass settings, running to twelve volumes, although seven of these were published posthumously. His motets saw greater commercial success, with seven volumes appearing during his lifetime, though many remained in manuscript until the publication of the late nineteenth-century edition, by F X Haberl and others, which appeared between 1862 and 1907. Palestrina’s motet output numbers around two hundred and fifty items, though the boundaries of the motet genre are not universally agreed: the worklist in New Grove II includes Marian antiphons (such as the Regina caeli recorded here) as motets, while separating other polyphonic genres with specific liturgical functions, such as Lamentations, Offertories, Hymns and Magnificats. Given such a large output of nearly five hundred items, it is not surprising that many of his works are infrequently performed today, especially since modern editions at a suitable performing pitch for mixed choirs are not as common as one would wish. That so much music by a leading master of the Renaissance remains largely unknown provides an opportunity to discover many hidden gems.

Missa Ad coenam Agni was published in Palestrina’s first book of Mass settings, issued in 1554 by the Dorico firm of Rome. The other settings in this book (Ecce sacerdos magnus, O regem caeli, Virtute magna, and Gabriel Archangelus) are all in four parts, but this Mass derives a fifth voice canonically. The canonic interval varies between the lower and upper fifth, and is stated at several temporal distances, most frequently two or three breves. As is customary, several movements feature reduced scoring, with the canonic voice dropping out in most cases, permitting greater compositional freedom. The ‘Christe eleison’ section is one example in four voices without the canon, as is the ‘Crucifixus’. In the Sanctus the ‘Pleni sunt caeli’ is a trio of lower voices, while the Benedictus dispenses with the canonic altus and the bassus while doubling the tenor for a four-voice texture in the higher register. Finally the second Agnus expands to six voices through the addition of a bassus secundus, bringing the Mass to a sumptuous conclusion. Also noteworthy are the complex mensurations of the two ‘Osanna’ sections: the first is in tempus perfectum diminutum, notated as ‘cut circle 3’ (the 3 is strictly speaking redundant since the circle itself denotes perfection or triple time): this translates into modern notation as 6/4 time. The second ‘Osanna’ is in tempus perfectum cum prolatione maiori, or ‘circle dot’ mensuration, meaning that both breve and semibreve are perfect and consequently the effect is similar to 9/8 or 9/4 time. Both of these notational devices, but especially the second, are highly archaic for the 1550s, and perhaps suggest a young composer demonstrating his mastery of the technicalities of music theory. Missa Ad coenam Agni is no dry compositional exercise, however: its graceful vocal lines and often lush harmony lend it an expressive power that is on a level with Palestrina’s best-known works.

The Mass is based on a plainsong Hymn dating probably from the seventh century. Palestrina also set this Hymn for use in the Office liturgy: this setting is not related to the Mass other than through its use of the same chant melody. As is customary in polyphonic Hymns, Ad coenam Agni providi is set alternatim, with the odd-numbered verses being selected for polyphonic treatment in this case. There are therefore four polyphonic verses interspersed with three sung to the chant, and Palestrina achieves a remarkable level of variety in treating the tune. The first verse commences in close imitation, with bassus introducing the second strain of the melody (the first having been intoned monophonically), followed by altus, cantus, and finally tenor, which states the chant almost without amendment, before the cantus takes it over at ‘Post transitum maris rubri’ (‘after crossing the Red Sea’). The second polyphonic verse is similarly imitative in style, but on a much broader scale: the chant melody is again heard most obviously in cantus and tenor, but with a greater degree of elaboration. The third verse is largely homophonic, with a striking cadence on E (sounding D at performing pitch) at ‘plebs captivata’ (‘a captive people’). The final verse expands to five voices with the addition of a second tenor, and is the longest and most exuberant of the four.

Surrexit pastor bonus and the eight-part Regina caeli (one of two eight-voice settings of this Marian antiphon) are of the very finest quality. The former, like the earlier setting by Jean Lhéritier which Palestrina may have known, is in the minor mode, giving it a sombre magnificence. Much use is made of antiphonal repetition, with the second choir shadowing the first either at the same pitch (as in the opening phrase) or lower as a form of echo technique. Usually sections are completed by both choirs coming together to iterate the text once more. ‘Et pro grege suo’ (‘and for his flock’) is set in short, homophonic antiphonal phrases, following which the crucial text ‘mori dignatus est’ (‘he deigned to die’) is stretched out to provide a meditative moment before the first half is completed with an increasingly energetic Alleluia. The secunda pars, equitably enough, begins with the second choir and, following another reminder of Christ’s death, rejoicing begins with running melismas at ‘epulemur’ (‘let us feast’), before the music of the closing Alleluia mirrors that of the prima pars except with the choirs reversed. The Regina caeli reserves the double-choir antiphony for the final section, the first two verses being taken by one choir each, but once both choirs are working simultaneously the interplay between them is joyous indeed, particularly in the extended Alleluias.

The two short motets Haec dies and Alleluia. Tulerunt Dominum are both based on texts for the Proper of the Mass. Haec dies quam fecit Dominus (‘This is the day which the Lord has made’) appears as the Gradual at Mass on Easter Day, as well as a Vesper antiphon later on the same day, and at other times in Easter week. Many of these instances feature different verses, which could be added in plainchant if Palestrina’s piece were performed during Mass, but since he set only the opening words, Easter Day Vespers is perhaps the most suitable liturgy for this setting. Its brevity would commend it for a feast on which much singing would already have taken place, and the joyful triple-time setting of ‘exsultemus, et laetemur’ is naturally appropriate for the celebration of the Resurrection. Alleluia. Tulerunt Dominum is slightly more unusual from a liturgical point of view, since although the text appears as a Magnificat antiphon on Friday in Easter week, in this form it lacks the initial Alleluia set by Palestrina. Following this opening section, the phrase ‘Tulerunt Dominum meum’ (‘They have taken away my Lord’) is stated initially by the two upper voices (perhaps an allusion to the two Marys?) before being developed by the whole choir. Later the words ‘si tu’ (‘if you’) are pointed, almost accusatory, before the rejoicing mood returns with syncopation at ‘dicito mihi’ (‘tell me’) and a final Alleluia.

Palestrina’s annual cycle of polyphonic Offertories, all in five parts, was published in 1593 by Francesco Coattino in Rome. Five settings for Eastertide Sundays are presented here, omitting that for the fourth Sunday after Easter, Jubilate Deo, which would have been supplied from the identically texted setting for the second Sunday after Epiphany. Terra tremuit (‘The earth shook’) adopts a dramatic approach initially, softening to a fauxbourdon-like texture for ‘dum resurgeret in iudicio Deus’ (‘when God arose in judgment’). The final Alleluia occupies about a third of the piece, beginning lightly with upper voices before a crescendo to the end. Angelus Domini (‘The angel of the Lord’) relates the story of the angelic vision to the women in the garden, contrasting the floated syncopation of ‘quem quaeritis’ (‘he whom you seek’) with a vigorous ‘surrexit’ (‘is risen’). Deus, Deus meus is more meditative, with long melismatic writing for ‘in nomine tuo’ (‘in your name’), whereas Lauda anima mea (‘Praise, my soul’) adopts close imitation and an assertive downward fourth motif for its opening. ‘Psallam Deo meo’ (‘I shall sing to my God’) is stated in thirds and tenths, before the texture thins to a more reticent Alleluia. Finally, Benedicite gentes, in a different mode from the other four, begins calmly before raising the temperature for the homophonic ‘Benedictus Dominus’ (‘Blessed be the Lord’). None of these pieces exceeds three minutes but each is a finely crafted addition to the liturgy.