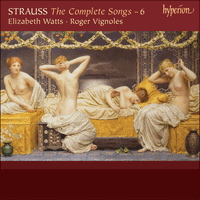 Hyperion’s Strauss Lieder series continues to demonstrate that the composer’s achievements in this genre are among the most fascinating and accomplished of his works. This latest volume includes, for instance, the delicious Schlechtes Wetter from Op 69, and the lovely—and unknown—Waldesfahrt from the same group. The delicately beautiful Malven (never published in Strauss’s lifetime, and first performed by Kiri Te Kanawa in 1985), with which the recital ends, is known as Strauss’s ‘Fifth Last Song’.

The central work recorded here, Krämerspiegel, owes its genesis to Strauss’s long-lasting and bitter dispute with the German music publishing industry. A Berlin literary critic, Alfred Kerr, wrote him a witty set of satirical verses lampooning music publishers, mentioning many of Strauss’s principal enemies by name. Strauss set all twelve poems to music, and this practical joke finally saw the light of day in 1921. It is easy to understand why the cycle is now rarely performed, given that the texts consist entirely of in-jokes, and that the lion’s share of the music is given to the pianist. But Strauss’s music is well worth savouring, not least for its humorous references to Strauss’s own works, such as Der Rosenkavalier and Ein Heldenleben, and especially for the beautiful prelude to the eighth song and its reprise as the final extended postlude—used by the composer nearly a quarter of a century later, in his opera Capriccio.

Roger Vignoles is the curator and pianist of this series, and also writes the informative booklet notes. Making her Hyperion debut is soprano Elizabeth Watts, of whom The Guardian commented at a recent Strauss Lieder recital: ‘Watts, winner of the Lieder prize at Cardiff Singer of the World in 2007, is already a major artist, but this struck me as making a transformation into a great one, as well as allowing us to hear her in music she seems to have been born to sing. Watts has the right tonal glamour for Strauss along with that tricky combination of vocal ease and immaculate control that his work requires.’

‘Vignoles plays the often extended introductions and postludes … quite magically, to say nothing of the extended interludes … my pleasure in this latest volume is without any reservations. Elizabeth Watts sings gloriously, rising fluently to the high tessitura of Strauss's melodic lines (immediately obvious in the first few songs included in the recital). Her beautiful voice, sensitive phrasing and response to word-meanings are consistently rewarding and her partnership with Roger Vignoles could hardly be more beautifully balanced’ (Gramophone)
‘Watts takes flight in this repertoire, her warm, generous soprano broadening into a luscious, creamy-toned wonder. Tonal glamour? You bet’ (The Guardian)
‘Watts has the full measure of the drama … she reveals herself as an accomplished Straussian throughout this recital and nowhere more so than in the very last song that the composer wrote, Malven, written for soprano Maria Jeritza in 1948 after he had finished the Vier letzte Lieder. A gift from one great artist to another and a fitting end to this admirable recording’ (International Record Review)

The present volume couples the rare Krämerspiegel, Op 66, with four songs from Opus 69, and a number of songs that for one reason or another remained unpublished until after Strauss’s death. These include the three early songs published in 1958 as Drei Liebeslieder; Wer hat’s gethan?, a fine setting of von Gilm that didn’t make it into the famous Opus 10 set; and what might be termed the ‘fifth last song’—Malven, Strauss’s last completed composition. The ‘TrV’ numbers given to those songs without opus number are as assigned by Franz Trenner in his thematic catalogue Richard Strauss: Werkverzeichnis (Munich, 1993, revised 1999).