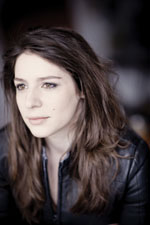 Elizabeth Watts was a chorister at Norwich Cathedral, and studied archaeology at Shefﬁeld University before studying singing at the Royal College of Music in London. She was awarded an Hon DMus by Shefﬁeld in 2013, and became a Fellow of the RCM in 2017.

In recital Elizabeth performs regularly at London’s Wigmore Hall, and further afield at venues such as the Royal Concertgebouw, Amsterdam, and the Musée d’Orsay, Paris. Her regular appearances at the BBC Proms have included Schubert songs with the BBC Philharmonic and John Storgårds, Ravel’s L’enfant et les sortilèges with the LSO and Rattle, and Beethoven arias with the NDR Radiophilharmonie and Andrew Manze.

Opera roles have included Zerlina and Donna Elvira (Don Giovanni), Marzelline (Fidelio), Susanna (Le nozze di Figaro), Pamina (Die Zauberﬂöte), Fiordiligi (Così fan tutte), the Countess in both Mozart’s opera and Elena Langer’s sequel Figaro gets a divorce, and Almirena (Rinaldo). In concert she has performed the roles of Josephine (HMS Pinafore) at the 2015 Edinburgh Festival, and Minerva (Il ritorno d’Ulisse in patria) with the AAM.

Elizabeth won the 2007 Rosenblatt Recital Song Prize at the BBC Cardiff Singer of the World Competition, and the Outstanding Young Artist Award at the Cannes MIDEM Classical Awards, as well as the 2006 Kathleen Ferrier Award. She is a former BBC Radio 3 New Generation Artist and was awarded a Borletti-Buitoni Trust Award in 2011.