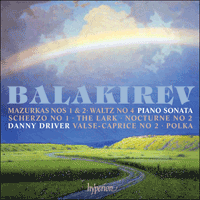 Pianist Danny Driver has garnered overwhelming critical praise – and a Gramophone award nomination – for his previous discs for Hyperion. His authoritative and virtuosic performances of York Bowen and CPE Bach have placed him firmly in the ‘one to watch’ category. For his latest disc, he turns to one of the giants of the Russian piano world.

This disc looks beyond the ubiquitous Islamey to some of Balakirev’s most important works – which are curiously underrepresented on disc. The Piano Sonata in B flat minor is a major achievement of the period and one quite unlike any contemporary large-scale piano composition. Its absence from the standard repertoire is unfortunate, as it is fully worthy of such a place. Undoubtedly this marvellous recording will provoke a reappraisal.

‘Danny Driver continues his Hyperion exploration of the piano repertoire with delightful interpretations of Mily Balakirev. In particular, the piano sonata in B flat minor is a terrific, big-hearted piece, unlike anything else from its period, and its neglect in the concert hall is surely due a reappraisal … impressive playing throughout ensures that your finger won't stray far from the replay button’ (The Observer)
‘In the case of the Sonata, motifs of folk song add a distinctive tang to a work of unorthodox construction but fascinating originality. Bravo to Hyperion for championing this music and to Driver for playing it with such sensitivity, polish and élan’ (The Daily Telegraph)
‘The three releases by the young British pianist Danny Driver have met with considerable acclaim. It's wonderful to see a talent such as this continuing to address the more obsure pianistic byways, and here Driver has assembled a fabulous array of works from Balakirev's very varied keyboard output … as ever, Hyperion provides recording quality and programme notes which are first class in every way’ (International Record Review)
‘Danny Driver's recordings of York Bowen for Hyperion have enjoyed critical success; here he shows himself a sterling interpreter of Russian repertoire … Driver is most attentive to the musics nuances. The Mazurka second movement is another of contrasts and he captures the dance element perfectly, revelling in sometimes extreme ornamentation … the recording is first class, with great presence’ (International Piano)
‘Young British pianist, Danny Driver, produces all the technical fireworks needed’ (Yorkshire Post)

The name of Mili Balakirev is forever associated with the group of composers dubbed by the essayist Vladimir Stasov ‘The Mighty Handful’ (in Russian moguchaya kuchka). As the only professionally trained musician in this five-man band (actually that training was a somewhat sporadic affair), Balakirev carried a natural authority. Especially in the 1860s, when his teaching career was at its height, he assumed the role of adviser not only to Rimsky-Korsakov, Borodin, Musorgsky and Cui, but also at times to those outside the circle, such as Tchaikovsky. Of all those composers, he was also the only pianist of professional competence, although after some prestigious early appearances he turned away from a possible career as a concert artist.

Balakirev’s most famous composition for piano solo is the Oriental Fantasy, Islamey, composed in 1869 at the height of his early prowess, just before a period of withdrawal from the musical world—brought on by a nervous collapse—that saw him working for a time as a clerk for the Russian railway. Before and after that time there is a substantial quantity of less flashy, yet still impressive and technically demanding pieces, including numerous arrangements and elaborations. In this respect, too, he surpassed all his kuchka colleagues. And the culmination of this strand of his output is his single completed sonata.

Like the symphony and the string quartet, the piano sonata was viewed with suspicion by the ‘Mighty Handful’, at least in its nationalist heyday, as a genre tainted with Germanic associations. It is certainly not easy to imagine what such a piece by Musorgsky, Borodin, Cui or Rimsky-Korsakov might have sounded like; nor would any of the group have been content with the Schumannesque boundaries observed by Tchaikovsky in his two completed sonatas. Yet if Chopin could meet the genre halfway, and if Liszt could bend it even further to his will, there was no reason why it should resist a modest degree of russification.

This was evidently Balakirev’s project; and a good deal of effort it cost him. The origins may be traced to an incomplete three-movement sonata from his student years, in the same exotic key of B flat minor. This supplied the second movement of the definitive sonata, by way of adaptation as Balakirev’s fifth mazurka in 1900. It was only in 1905, nearly fifty years after that juvenile sonata, and just five years before his death, that he put the finishing touches to the work. Thereafter it lived a shadowy existence until its first recording in 1951 by Louis Kentner for Columbia, sponsored by the Maharajah of Mysore’s Foundation.

In his determination to de-Germanify the four-movement sonata cycle, Balakirev removed dramatic weight from the first and slow movements. He begins instead with the highly unorthodox ploy of a fugal exposition, on a sinuous subject that embraces folk-like motifs and describes a graceful overall descent. After two academically correct entries, this fugato gives way to lyrical Chopinesque reverie, and the rest of the movement explores the relationship between strict fugue and free rhapsody, as though no one had told the composer that the elements cannot mix (or maybe someone had told him, and he was determined to prove them wrong). Then follows the Mazurka originally composed some fifty years previously, complete with a trio section that decks out its theme in richer ornamentation than any Chopin mazurka.

The third movement is an Intermezzo whose themes consist of fragments that never quite gel into tunes. Decked out with a Scriabinesque accompaniment whose contours subtly contradict the prevailing metre, this apparent exercise in Russian impressionism is the only part of the sonata that feels truly of the twentieth century. If this slow movement is all suggestion and elusiveness, the finale is solid as a rock. Initially Schumannesque in its textures, then Lisztian in its elaborations, it is largely a display of strenuous virtuosity. Yet in the contrasting episodes the slow-movement fragments are recalled, this time converging into full-blown song, and ultimately the sonata reaches a peaceful conclusion.

The remainder of Balakirev’s piano output is populated by mazurkas (seven), nocturnes (three), scherzos (three) and waltzes (seven)—all genres favoured by Chopin. It is worth recalling that for the entirety of Balakirev’s lifetime Poland was partitioned between Russia, Prussia and Austria. So whatever national-pride agenda may lie behind Chopin’s use of Polish dance-forms, Russians were more likely to view that culture as an extension of their own.

In fact it is a good deal easier to tick off the origins of Balakirev’s piano style (Liszt as well as Chopin, plus predecessors such as Hummel and Weber) than to put one’s finger on its uniqueness. Soviet scholar Yuli Kremlyov rightly claimed that Balakirev demands an ‘extremely highly developed technique of strong fingers full of initiative, capable of executing fast ornamental passages with the accuracy and assurance of engraving instruments in the hand of a master’ (quoted in Edward Garden, Balakirev, London, 1967). But that is true of all Romantic piano music. What is more apparent to the ear is that the many passages of Chopinesque grace and fluency are balanced—indeed sometimes outweighed—by a big-boned grandiosity that seems, paradoxically, to come more from Anton Rubinstein, the pianist-composer-teacher whose German instincts and origins were supposed to be anathema to Balakirev and his circle.

The Nocturne No 2 in B minor (1901) emulates the grander Chopin nocturnes, especially in it its contrasting ‘prayerful’ section, whose arpeggiated chords recall those of Chopin’s C minor Nocturne Op 48 No 1. This section carries further markings such as quasi fiati (woodwind) and quasi organo, before it develops into ever more luxuriant decorations.

Balakirev’s mazurkas are a good deal more demonstrative than any of Chopin’s. No 1 in A flat major (from the end of the 1850s), establishes a characteristic pattern for Balakirev in its trajectory from modest, folk-like beginnings to a fiery coda. No 2 in C sharp minor (c1860) is less developed, but still chunkily scored in its concluding repeated section.

The Valse-Caprice No 2 in D flat major is an elaboration of a piece by Alexander Taneyev, a distant relation of the much better known Sergey. Here Balakirev gives full rein to his gift for cadenza-like flourishes, which introduce and punctuate Taneyev’s music, culminating in a coda that features the most extravagant of many textural accretions.

The Waltz No 4 in B flat major dates from 1903 and starts, as Balakirev so often does, with a big flourish, which will be further developed in the middle section, before virtuoso demands once again pile up towards the coda. Much more famous than his Taneyev arrangements is Balakirev’s elaboration of Glinka’s song The Lark. Here the textures come unequivocally from the Listzian stable, including the much-vaunted ‘three-handed’ technique that he, and especially his great pianistic rival Sigismond Thalberg, had virtually made into a cult.

The debt to Chopin is at its clearest in such pieces as the Scherzo No 1 in B minor (1857 or earlier). In fact Balakirev’s penchant for the keys of B minor and B flat minor can surely be traced to Chopin’s first and second scherzos as well as to his second and third sonatas. Typically, Balakirev’s Scherzo adds glitter and sparkle to lyrical themes, rather than making glitter the substance (as Chopin so brilliantly did), and it features one of the flashiest codas in his output, preceded by some brilliant bariolage (dividing material between the hands to percussive effect, in a way derived from the violinistic technique of rapidly alternating fingered notes and open strings).

Finally the Polka in F sharp minor represents Balakirev at his most modest. This was the first of his piano works to appear in print (in 1859), and it is as winsomely charming—though by no means as athletic in its demands—as Louis Moreau Gottschalk’s famous novelty piece of 1845/6, Le bananier.