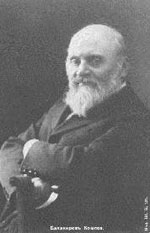 born: 2 January 1837
died: 29 May 1910
country: Russia
Mily Balakirev grew up down the Volga river from Moscow, in the provincial city of Nizhny Novgorod. But it was St Petersburg that beckoned, and the young Balakirev’s musical ambitions drove him to abandon his mathematical studies and pursue the artistic life in Russia’s cultural capital. His decision was quickly validated and the young composer rose to prominence in the city’s thriving intellectual community, eventually becoming part of a group known as 'The Five'. Together with Alexander Borodin, César Cui, Modest Mussorgsky, and Nikolai Rimsky-Korsakov, these young musicians rallied against the bourgeois musical establishment, championing the untempered creative spirit of the autodidact and the inherent value of Russia’s rich folk culture.

Because of his experience Balakirev took on the unofficial role of mentor to the group but became somewhat of an authoritarian. He would reject outright any musical opinion that differed from his own, which led to all of the Five’s music sounding increasingly similar and more like his own. These personal insecurities, magnified in a personality prone to bouts of intense depression, led to a nervous breakdown in 1871, when Balakirev abandoned all aspects of his musical life to find solace in the Russian Orthodox Church. He also resigned from the directorship of the Free Music School in St Petersburg and found a comfortable position as a railway clerk away from the city. By this point he had stopped composing altogether. He eventually returned five years later to resume his duties as director and began to write music in a style similar to his younger days, but tragically lacking in passion. He retired in 1895 and devoted his remaining years to composition.