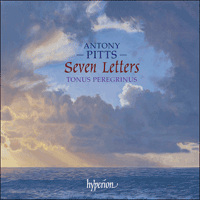 Antony Pitts is a distinctive new voice whose music has been premiered at Wigmore Hall in London, the Concertgebouw in Amsterdam, and the Philharmonie Kammermusiksaal in Berlin. Alongside commissions from groups as diverse as The Clerks’ Group, Oxford Camerata, The Choir of Westminster Cathedral and the Swingle Singers, his mammoth forty-part motet XL (a companion piece to Tallis’ Spem in alium) was recently released on the Harmonia Mundi label in a premiere performance by Rundfunkchor Berlin and Simon Halsey.

Pitts’s choral music combines a jazz-infused idiom within a tight structure of traditional musical form and a response to the sacred texts which is both fervent and captivatingly heart-on-sleeve.

At the centre of this new recording is Seven Letters. Thought to be the only choral setting of St John’s damning indictment of the first-century church in Asia Minor (where, we are graphically told, the inhabitants were indulging in almost every form of depravity imaginable) from the Book of Revelation, each ‘letter’ is declaimed by one of the seven virtuosic members of Tonus Peregrinus over a cyclical choral backdrop which insistently increases in intensity as the work moves through the seven ‘letters’ of the musical scale, A to G. Such multifaceted intricacy is typical of Pitts’s approach in the other pieces presented here. In each case a ‘pop’-style ‘hook’ provides the listener with an immediate entry point (this accessibility is further aided by the English-language texts used), while repeated listening allows the full scope of the musical vision gradually to unfold.

Formed by Antony Pitts in 1990, Tonus Peregrinus has steadily gained an international reputation for musical excellence, the ensemble’s recording of Arvo Pärt’s Passio on the Naxos label winning a Cannes Classical Award in 2004.

Antony’s high-profile resignation from the BBC (where he was a senior Radio 3 producer for many years) over the Jerry Springer: The Opera broadcast caused quite a storm. Were St John to write an eighth ‘letter’, this time to the BBC Director General, we would barely be able to print it …

‘Tonus Peregrinus is a double quartet of expert singers brought together by the composer. With firm, fresh voices and precise intonation … they sound as ideal a group for fulfilling his intentions as he is likely to find on this side of the Heaven to which so much of his music aspires’ (Gramophone)
‘Seven shorter pieces complete the programme, the best of which are Adoro te and Amen, both of which make striking use of dynamic and spatial effects. The performances are excellent’ (BBC Music Magazine)
‘Heatedly recommended’ (Fanfare, USA)

The Hebrew word ‘Amen’ means both ‘truly’ and ‘may it be so’; the last of the seven letters from the Book of Revelation echoes both meanings: ‘These are the words of the Amen’.

All the texts here are sacred words – either from the Bible, or filtered through liturgical traditions of the last two thousand years – and the pieces on this recording form a sequence of personal responses to those words and the realities behind them.