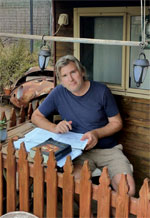 born: 24 March 1969
country: United Kingdom
'My first impulse on hearing this disc was to commend it unreservedly to each and every man, woman, and child on the planet …' (Fanfare)

'Perhaps one of the most sought-after British composers of contemporary choral works …' (Classical.net)

Antony Pitts is founder-director of British ensemble Tonus Peregrinus and winner of the Prix Italia, Cannes Classical, and Radio Academy BT Awards. Born in 1969 into a family of singers and composers, then Hampton Court Chapel Royal treble, New College Oxford Academic and Honorary Senior Scholar, BBC Radio 3 Senior Producer, and Royal Academy of Music Senior Lecturer in Creative Technology, before emigrating in 2015 to become Artistic Director of Australia's national vocal ensemble, The Song Company. His music has been performed at London's Wigmore Hall and Westminster Cathedral, Amsterdam's Concertgdmuw, Berlin's Philharmonic Kammermusiksaal, and for Alexander Litvinenko's memorials. His scores including The Naxos Book of Carols, and XL, a companion 40-part motet to Tallis's Spem in alium, are published by 1equalmusic and Faber Music, with recordings on 1equalmusic, Challenge Records, Delphian, Hyperion, Harmonia Mundi, Naxos, Novum, Signum, Unknown Public, and many radiophonic works on BBC Radio 3. His double-choir Missa Unitatis was the first mass to be commissioned by the Dutch lllustre Lieve Vrouwe Broederschap for half a millennium and recorded under Stephen Layton; his cantata for string quartet and traditional Arab ensemble, Who is my neighbour?, was the focus of an Aldeburgh residency with Aldeburgh Young Musicians and workshops at Al Kamandjâti, Ramallah, and he conducted the premiere at the opening of a Spitalfields Summer Festival; his oratorio-musical Jerusalem, Yerushalayim, received a standing ovation at its premieres in Northern Ireland and the USA, with a studio recording remixed with narration by David Sucher: his 50-part motet XLX – Mente cordis sui was premiered in Sydney Opera House in 2019. He is currently completing his monumental Requiem for the Time of the End, and working with Adrian Self on The Process—music theatre inspired by Kafka, starlings, and social media.