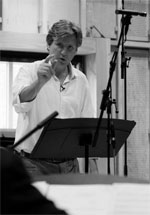 see also Antony Pitts (piano)
Antony Pitts is a composer, conductor, producer, and recipient of the Radio Academy BT Award, the Prix Italia, and a Cannes Classical Award. A Chapel Royal treble, Academic and Honorary Senior Scholar at New College, Oxford, founder of British ensemble Tonus Peregrinus, Senior Lecturer at the Royal Academy of Music, and Senior Producer at BBC Radio 3, he made his Glastonbury Festival debut in 2014, and in 2016 joined The Song Company, Australia’s premier vocal ensemble, as the first new Artistic Director for a quarter of a century. Commissioned for, among others, Alexander Litvinenko, Cheltenham Festival, King’s College London, New College Oxford, Rundfunkchor Berlin, The Swingles, and Westminster Cathedral, with premières of his music in Wigmore Hall, Concertgebouw, Philharmonie Kammermusiksaal, and Sydney Opera House, and releases on Challenge Records, Delphian, Hyperion, Harmonia Mundi, Naxos, Novum, Signum, and Unknown Public, critical acclaim for Antony’s music tends towards hyperbole: 'My first impulse on hearing this disc was to commend it unreservedly to each and every man, woman, and child on the planet …' He is currently working on a music theatre piece with Adrian Self called The Process.
www.antonypitts.com