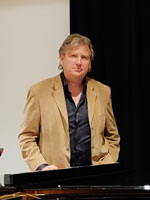 see also Antony Pitts (conductor)
Antony Pitts is a composer, conductor, producer, and pianist, and winner of the Prix Italia, Cannes Classical, and Radio Academy BT Awards. Born in 1969 into a family of singers and composers, Antony was a Chapel Royal treble at Hampton Court Palace, Academic and Honorary Senior Scholar at New College Oxford—where he founded the ensemble Tonus Peregrinus, Senior Producer at BBC Radio 3, and Senior Lecturer in Creative Technology at the Royal Academy of Music. He emigrated in 2015 to become Artistic Director of Australia’s national vocal ensemble, The Song Company. His music has been performed at London’s Wigmore Hall and Westminster Cathedral, Amsterdam’s Concertgebouw, Berlin’s Philharmonie Kammermusiksaal, the Sydney Opera House, and for Alexander Litvinenko’s memorials. Antony first performed Harawi with soprano Kate Huddie in the Holywell Music Room in Oxford in 1989. His own scores including The Naxos Book of Carols, a companion 40-part motet to Tallis’s Spem in alium, XL, and a 50-part motet XLX – Mente cordis sui, are published by 1equalmusic and Faber Music, with recordings as performer and composer on 1equalmusic, Challenge Records, Delphian, Hyperion, Harmonia Mundi, Naxos, Novum, Signum, Unknown Public, and many radio works broadcast across the European Broadcasting Union. Antony is currently completing a monumental Requiem for the Time of the End, and a music theatre piece with Adrian Self called The Process.
www.antonypitts.com