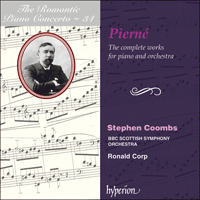 There are three premiere recordings on this charming disc of the complete music for piano and orchestra by the unaccountably neglected Gabriel Pierné.

In his time Pierné was hugely successful as composer, conductor and organist—a sort of latter-day Saint-Saëns, and indeed his music is very reminiscent of that composer. The earliest three works on this CD were all written between 1885 and 1890 and could easily be mistaken for the older composer, the piano concerto even follows the unusual layout of Saint-Saëns' 2nd piano concerto in having a scherzo but no slow movement. The Poëme symphonique of 1903 is harmonically more daring and reminiscent of Franck. This work is a true orchestral symphonic poem with the piano fully integrated into the musical argument, it is also perhaps the most impressive work on this disc and its obscurity is inexplicable.

A disc full of surprises, all of them pleasant!

‘Stephen Coombs savours the more exotic keyboard writing with confidence and a sure sense of style, contributing appropriately dazzling and light-fingered virtuosity when required’ (International Record Review)
‘This is the greatest thing since ice cream! … Coombs and conductor Ronald Corp catch the concerto's sly leg-pull and puff the airy graciousness suffusing these youthful pieces with soufflé-like savoir faire’ (Fanfare, USA)
‘Every track on this disc is an absolute winner. Stephen Coombs revels in the myriad of notes that tear around the keyboard in such light-hearted mood, the pro-active orchestral partnership captured in a superb recording’ (Yorkshire Post)

Few musicians have enjoyed such a glittering career as that of Gabriel Pierné. He was a successful conductor – from 1910 to 1934, as principal conductor of the Concerts Colonne, he was responsible for planning and conducting forty-eight concerts a year. A renowned organist, he succeeded César Franck at the console of Sainte Clotilde, a post he held from 1890 to 1898. He was a prolific composer, completing nine operas, nine ballets, a host of symphonic works along with a significant body of chamber music, a clutch of oratorios, and numerous solo instrumental pieces. A respected educator and leading member of the French musical establishment, he served on the directing committee of studies at the Conservatoire and was also a member of the Académie des Beaux-Arts and a Chevalier of the Légion d’honneur. Respected by his colleagues and fêted by the public, his considerable fame seems to have expired with his dying breath.

(Henri Constant) Gabriel Pierné was born in Metz on 16 August 1863. Both his parents were professional musicians and it was not surprising that the young Gabriel soon clamoured for admission to the Paris Conservatoire. Once there, he settled down to winning prizes in every subject he studied, setting a pattern that was to continue throughout his life. By the age of eleven he had won the medal for ‘solfège’. He studied organ with Franck and composition with Massenet – winning ‘premiers prix’ in both subjects as well as in counterpoint. His biggest success came in 1882, when he won the Prix de Rome for his cantata Edith. This prize gave Pierné the opportunity to spend four years in Italy, staying at the Villa Medici. Pierné adored Italy and the music he wrote during this period – including his Fantaisie-Ballet for piano and orchestra (1885) and the Piano Concerto (1886/7) – is marked by a virtuosic exuberance that was to become characteristic of many later works.

Eventually, and reluctantly, Pierné returned home to Paris – the offer of a post as organist at Saint Sulpice no doubt provided compensation for leaving his beloved Italy. In 1890 Pierné succeeded Franck as the organist at Sainte Clotilde; aged only twenty-seven he was now one of the foremost organists in France. His reputation as a composer was also growing, as was his career as a conductor; he was instrumental in programming many new works by his fellow composers and was widely considered a model of success. He died at Ploujean on 17 July 1937.

The Fantaisie-Ballet Op 6 was Pierné’s first work for piano and orchestra. Written in 1885 it is essentially a suite of connected movements. A work of glittering virtuosity, the piano part bristles with every conceivable difficulty. It is dedicated to the pianist Caroline Montigny-Rémaury, a famous virtuoso and friend of Saint-Saëns, with whom she played duets. She was also the sister-in-law of the influential Ambroise Thomas, Director of the Paris Conservatoire. She is perhaps best remembered today as the dedicatee of Saint-Saëns’ Caprice-valse Wedding cake Op 76 – a work written on the occasion of her marriage in 1885, when she became Madame Caroline de Serres. Pierné’s dedication gives both Caroline’s married and maiden names and, although it is possible that the twenty-two year old Pierné personally knew the celebrated pianist, it seems likely that this is a case of Pierné imitating Saint-Saëns with his own ‘wedding cake’.

The Piano Concerto in C minor Op 12 probably dates from the end of 1886. Again a connection with Saint-Saëns is discernible – most particularly in its unusual movement sequence which matches Saint-Saëns’ own Second Piano Concerto. The opening movement resembles a classical first movement form – though Pierné extends the usual exposition section to create a three-part structure preceded by an imposing maestoso introduction, dominated by the piano. The brief development section and heavily truncated recapitulation suggest that Pierné felt happier working within his own structural frameworks. As in many of Pierné’s works these structures rely less on classical models than on the repeated use of motifs which lend the works an almost cyclical character. The scherzando middle movement is most reminiscent of Saint-Saëns and strongly suggests a conscious imitation on the part of Pierné. The impressive final movement is a brilliant rondo which makes liberal use of previous material, particularly from the first movement, to create a sense of unity. Pierné chose to dedicate his piano concerto to another famous female pianist, Maria Roger-Miclos, who later became the dedicatee – and gave the first performance – of Saint-Saëns’ fantasia for piano and orchestra, Africa Op 89.

Both the Fantaisie-Ballet and the Piano Concerto were influenced by Pierné’s stay in Italy – he described his time there as the happiest period in his life. These works can be seen as a turning point for the young composer and did much to enhance his stock in the musical world of Paris. Interestingly, Pierné’s other two works for piano and orchestra were also written during defining periods of his career.

The Scherzo-Caprice Op 25, written in 1890, is another virtuosic tour-de-force, also dedicated to Caroline de Serres (née Montigny-Rémaury). Its form is an extended rondo with five episodes. The work opens with an introduction whose fanfare-like figure is later used to link various sections. Again, the structure is only very loosely based on classical models as the first episode only appears twice throughout the work. Pierné delights in using motifs from episodes as linking material as well as combining separate episodes together. Despite its very free form, this characteristic use of repeating motif and cyclical structure creates a strong, cohesive work. As we have seen, 1890 was the year that saw Pierné take over from Franck at Sainte Clotilde – this work would probably have been written during the composer’s annual vacation at Carantec (like d’Indy, Pierné composed mainly during his holiday break) and its infectious exuberance and energy surely reflects the optimistic mood prompted by his new post.

The Poëme symphonique Op 37 is the last of Pierné’s four works for piano and orchestra. The significant year this time is 1903, the year Pierné was appointed as deputy director of the Concerts Colonne. If the earlier works evoke echoes of Massenet, with their easy and infectious charm, the Poëme symphonique shows an affinity with Pierné’s other great teacher, Franck. Written as a single movement rhapsody, its sombre, chromatic harmonies and contrasting themes – the first darkly mysterious, the second consolatory – suggest that Pierné may well have had Franck’s own symphonic poem for piano and orchestra, Les Djinns, in mind. Of course, the two works are in some respects quite different, particularly in Pierné’s triumphal conclusion. However, there are other striking similarities, not least the way the piano part is integrated with the orchestra, making both works truly symphonic. Franck’s work had been commissioned by the ubiquitous Caroline Montigny-Rémaury, though it was finally premiered at the Concerts Colonne in 1885 with Louis Diémer as soloist, and, as a further link, Pierné dedicated his Poëme symphonique to Edouard Risler, Diémer’s famous pupil. This fascinating work ranks alongside Pierné’s most important music, such as his highly successful Piano Trio and complex Piano Quintet – the latter pre-dating by several years that of Fauré. Indeed, it is one of the interesting aspects of Pierné that although his output includes unashamedly lightweight confections – his operas Sophie Arnould and Fragonard, for example – there are numerous works, including the Poëme symphonique, that provide compelling evidence that Pierné was more than a composer of mere trifles.

Considering Pierné’s colossal success during his lifetime, the subsequent neglect of virtually all his music seems mystifying. Could it be that he simply wrote too much or, in doing so, failed to produce work of sufficient individuality? Some commentators, such as Laurence Davies in his book César Franck and his Circle, have suggested that this neglect stems from the public’s unwillingness to be appealed to on more than one level at a time, and that ‘he came up against resistance in his high-minded incarnation, only to find himself eagerly and sincerely adopted as a purveyor of “bonnes-bouches”’. His death in 1937 shortly before the Second World War cannot have helped his cause. It is possible, too, that his very success during his lifetime counted against him after death. Pierné was essentially more of a conservative than a rebel and chose to cultivate the ‘right’ people and promote his career carefully. A good example of his prudence and attention to the mood of the day was his response (or lack of it) to the riots at the Concerts Colonne in 1904. Supporters of the new, operatic aesthetic attended every concert, interrupting any concertos or similar works with whistles and catcalls. This boycott proved fatal for many works as managers became reluctant to programme new concertos for fear of further disruption. Among the casualties were piano concertos by Widor and Massenet, which were rarely performed again. With this in mind, it is unlikely to be a coincidence that the Poëme symphonique, written the previous year, was to be his last work for piano and orchestra.

Undoubtedly talented – at his best his output includes some of the finest music of his generation – in the end, the successful career that Pierné had so carefully nurtured counted against him. After all, on the surface, his achievements had come too easily – the public has always distrusted Art without suffering.