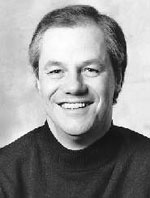 He began conducting full-time in 1988 when he founded the New London Orchestra. With the Orchestra he has appeared in all the main London venues and at major festivals around the country. The Orchestra has a gained an excellent reputation for its innovative programming and for its acclaimed recordings on Hyperion, and Ronald Corp has made it his mission to breathe new life into a wealth of little known music from the late nineteenth and twentieth centuries, as well as commissioning many new works.

The New London Children’s Choir is one of the busiest and most successful youth choirs in the country, and also performs frequently abroad. Ronald Corp has conducted the choir in numerous concerts, recordings and a television workshop as part of the Young Musician of the Year. The choir’s other engagements have included the premières of over 30 commissions as well as works by leading composers including its patrons Andriessen and Nyman; performances at the Proms; numerous soundtracks and TV recordings; and concerts and recordings with all the major London orchestras and for the BBC.

Ronald Corp is also a composer and his first major choral work And all the Trumpets Sounded was premiered in 1989 by Highgate Choral Society, who commissioned it, and is published by Stainer and Bell. His cantata Laudamus was premiered at St John’s, Smith Square, in 1994 by the London Choral Society to great critical acclaim and its third performance was given at a Gala concert in the Royal Festival Hall.

An expert in choral training and choral repertory, Ronald Corp’s comprehensive reference book entitled The Choral Singer’s Companion has been recently republished in a second edition.