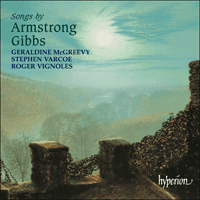 Born into the well-known 'Gibbs toothpaste' family, Armstrong Gibbs (he hated the Cecil with which his name is often prefixed)—born 1889, died 1960—is a member of that wide category of English composers who, without pretensions to 'significance' or greatness, left much attractive and worthwhile music without which we would be much the poorer. Moderately prolific, his 'op' numbers extend to over a hundred. Much of his music, therefore, still awaits investigation and reassessment. He wrote over 150 songs, many of them to words by his friend Walter de la Mare, of which there are a dozen in this collection of 36, including the much-loved 'Silver' and 'Five Eyes'.

The programme is shared between soprano Geraldine McGreevy and baritone Stephen Varcoe whose love for these songs is apparent in their affectionate performances with Roger Vignoles.

‘Songs which gain in stature through being presented in sequence and superbly done’ (Gramophone)
‘Two superb voices alive to Gibbs’s many moods, while Roger Vignoles accompaniments are a model of sensitivity and understanding’ (BBC Music Magazine)
‘Geraldine McGreevy and Stephen Varcoe are persuasive advocates … Roger Vignoles is the ideal accompanist, adding to the atmosphere of each song’ (The Guardian)
‘Most of these songs I had not heard before, nor, I suspect, have most listeners. Hyperion must be thanked for making them available’ (International Record Review)
‘Lyrical, imaginative … Geraldine McGreevy’s soprano voice is sweet and pure’ (Classic FM Magazine)
‘Stephen Varcoe sings with typical sensitivity … Roger Vignoles offers shapely, perfectly-scaled accompaniments’ (Yorkshire Post)
«Ces mélodies sont exquises sans être précieuses. La sensibilité est fine, l’expression nuancée mais sans artifice» (Monde de La Musique)

Cecil Armstrong Gibbs was born on 10 August, 1889, in Great Baddow, a village on the outskirts of Chelmsford, Essex. His father was head of an old-established firm of toothpaste manufacturers. ‘Gibbs’ Dentifrice’ (a disk of hard paste, pink in colour, which produced a slightly abrasive foam when rubbed with a wet toothbrush) was one of the most popular brands of the day and provided the family with a considerable fortune. It was therefore expected that, despite early evidence of a talent for music (he wrote his first ‘song’ when he was five), the young Gibbs would join the family firm. Accordingly, he took the educational route most likely to equip him for such a life. Preparatory School, at Hove in Sussex (1889), led to a scholarship to Winchester College (1902) and then to three years at Trinity College, Cambridge (1908-1911), where he read for a degree in History. Throughout this time, however, music asserted its claims to such an extent that his family dropped their opposition and he was allowed to remain at Cambridge for a further two years to study for a Bachelor of Music degree under the composer Charles Wood (1866-1926) and the musicologist Edward J Dent (1876-1957).

On completing his studies, Gibbs embarked on a teaching career. In due course (1915) he joined the staff of his old prep school where, in June 1919, he composed the music for a play which he had asked the poet Walter de la Mare to write in honour of the headmaster’s retirement. The quality of his contribution to Crossings, as the play was called, was such that the conductor of the occasion, the young Adrian Boult, insisted that he should now take composition seriously. Although he had married in 1918, family support again came to his aid and enabled him to enrol at the Royal College of Music for a year’s study under Ralph Vaughan Williams.

Commissions to write incidental music for a London production of Maeterlinck’s play The Betrothal in 1920, and the Cambridge University production of the Oresteia of Aeschylus in 1921, together with the publication of a comic opera, The Blue Peter (1923), by the Carnegie Collection of British Music, confirmed his reputation as a gifted composer. It soon became clear that his special talent was for songs, and in particular the setting of words by his friend Walter de la Mare.

Of the 162 songs he was eventually to write, no fewer than 38 are to de la Mare’s poems. They range in mood from the dream-like serenity of ‘Silver’, to the jaunty good-humour of ‘Five Eyes’, and, without exception, capture the unique quality of the poet’s unusual imagination. Fanciful, mysterious, disturbing – de la Mare’s world is that of a child who knows that appearances are not always what they seem. Gibbs matches the poet’s vision with music that has an equally deceptive simplicity. In all essentials, composer and poet speak with one voice – an affinity that de la Mare was happy to acknowledge, and which he thought could only be said of one other composer: Herbert Howells.

De la Mare, however, was the only major poet to whom Gibbs felt particularly drawn. Others who attracted his attention were often no more than competent amateurs. His friend and neighbour Sir Walter Mordaunt Currie was one such. He supplied the words not only for seventeen songs, but also the text for a Choral Symphony, Odysseus (1938), and a three-act opera based on Shakespeare’s Twelfth Night (completed in 1947 and as yet unperformed). Another was ‘Margery Agrell’ – the pen name of the soprano Ursula Greville who, as mistress of the publisher Kenneth Curwen, attracted the wrath of Peter Warlock when she ousted him as editor of The Sackbut in 1921. But minor verse can often be the basis for a successful song, and in this respect Armstrong Gibbs was no exception among composers.

Although supported by his family’s wealth, and to an increasing extent by the popularity of his songs, Gibbs felt it important to follow a ‘useful’ professional career. From 1921 to 1939 he taught theory and composition at the Royal College of Music, and from 1923 to 1952 was much in demand as an Adjudicator at Competitive Music Festivals – for which his songs and partsongs regularly provided suitable material. Among his more ambitious works are three symphonies and ten string quartets. (In 1934 he was awarded the Cobbett Gold Medal for services to British chamber music.)

Apart from wartime years in the comparative safety and tranquillity of the Lake District, Armstrong Gibbs remained true to his native Essex, where he died on 12 May, 1960.