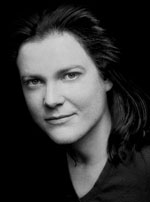 Geraldine McGreevy is the 1996 Kathleen Ferrier award winner. She graduated in music from the University of Birmingham and was a postgraduate student at the Royal Academy of Music. She has subsequently been made an Associate of the Royal Academy of Music. She continued her studies at the National Opera Studio, sponsored by English National Opera, and currently studies with Richard Smart.

Geraldine McGreevy's recordings include Schubert, Schumann, Chausson and a solo Hugo Wolf recital with Graham Johnson for Hyperion, songs by Arthur Bliss with the Nash Ensemble (Hyperion), music by John Blow with Red Byrd and the Parley of Instruments (Hyperion) and Handel’s Arminio with Il Complesso Barocco and Alan Curtis (EMI). In recital she has appeared at the Wigmore Hall, St. John's Smith Square and the KlavierFest Ruhr with Graham Johnson and at the Edinburgh Festival with Julius Drake.

Her operatic roles have included Donna Anna (Don Giovanni) and Mistress Page (Sir John in Love) for British Youth Opera and Fiordiligi (Royal Academy of Music conducted by Sir Colin Davis). She made her debut with Welsh National Opera as First Lady (Die Zauberflöte), returning for Miss Jessel (The Turn of the Screw), Micaela (Carmen), Countess (Le nozze di Figaro), Donna Anna, Rosalinde (Die Fledermaus) and Vitellia (La clemenza di Tito). She has sung Fiordiligi (Così fan tutte) for Opera Zuid and both Female Chorus (The Rape of Lucretia) and Vitellia (La clemenza di Tito) at the Edinburgh Festival. She made her debut at the 2001 Aix-en-Provence Festival as Alice Ford (Falstaff), also seen at the Theatre des Champs Elysees, and with the Royal Opera House, Covent Garden, in Parsifal under Sir Simon Rattle.