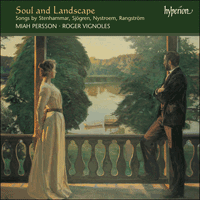 Since Jenny Lind in the nineteenth century, Sweden has given us many 'Swedish nightingales'. Here is one of the latest to delight us. Soprano Miah Persson is a bright and shining talent from Stockholm's Royal Swedish Opera who is rapidly winning admiration from her audiences for her roles of Susanna, Gretel, Sophie and others. As yet little known in Britain, Miss Persson has already caused a stir in France, Germany and Switzerland for her singing of Bach, Mozart, Haydn and Rossini.

Her first solo recording collects together some particularly lovely songs by four composers from her native country, including the Tannhäuser cycle of six songs by Emil Sjögren (1853-1918), to German texts by Julius Wolff.

‘Everything about this disc is inviting … the kind of CD that makes you want to go back and listen again to almost every song … I cannot imagine them being better sung … it is typical of Hyperion to present both such material and such a promising singer’ (Gramophone)
‘Near perfection’ (BBC Music Magazine)
‘Gorgeously rich and charmingly expressive’ (The Independent)
‘A rare, effortless lyric voice, clear, and beautiful in tone’ (Classic FM Magazine)
«Pour une première rencontre, difficile de rêver mieux» (Diapason, France)
«Miah Persson sert remarquablement ces œuvres» (Classica, France)

Although the literature of Swedish song may not boast a Schumann or Wolf, a Fauré or Duparc, its riches are much greater than its neglect would signify. There are very few songs that could not be programmed alongside the finest German lieder of the period without apology or fear of comparison – Wolf and Sibelius excepted. Of course, Swedish song flourished before the four masters represented in this anthology. As well as their musical achievements, Erik Gustaf Geijer (1783-1847) and Carl Jonas Love Almquist (1793-1866) were both poets (Geijer was an important one, and Almquist was, in Julius Rabe’s words, perhaps ‘the deepest and most original of Sweden’s romantic poets’). However, it was Adolf Fredrik Lindblad (1801-1878), much admired by Mendelssohn, who possessed the most natural lyrical talent. He studied with Carl Friedrich Zelter, Mendelssohn’s teacher and a member of Goethe’s circle. It was he who laid the foundations of what became the romans (the Swedish equivalent of the German Lied or the French mélodie), and it is often forgotten that he was a fine symphonist. Sweden’s finest composer of the period, Franz Berwald (1796-1868) gravitated towards the symphony, chamber music and opera, and showed little or no interest in the genre.

Emil Sjögren (1853-1918) belongs to the generation before Stenhammar though his musical personality is not so strong and his level of creative ambition more modest. As a youngster he served in a music shop whose owner was quick to recognise his talent and enabled him to pursue serious studies, first in Stockholm and then abroad. He spent some time in Germany and France, and in 1881 he was appointed organist of the French Reformed Church in Stockholm, and ten years later of the Johanneskyrka where he remained until his death. He wrote five violin sonatas, all finely crafted and obviously the work of a cultured and inventive mind, a cello sonata, and a variety of pieces for the piano including two sonatas, but hardly ventured into the realm of the orchestra.

At the centre of Sjögren’s output are the songs, some two hundred in all, which in his choice of verse reflects a more cosmopolitan taste than many of his contemporaries. He was first drawn to Norwegian and Danish poets such as Bjørnstjerne Bjørnson, Ibsen, Holger Drachmann and Jens Peter Jacobsen. Indeed, a half were to non-Swedish poets ranging from Giebel who was to inspire Wolf, and Li-Tai-Po in the German translations of Hans Bethge, familiar from Mahler’s Das Lied von der Erde, although he set such native poets as Gustav Fröding and Werner von Heidenstam. His early music reflects the impact of Schumann, Grieg and Liszt, though thanks to his travels he was fully abreast of Wagner, Franck and Debussy. His settings of the six Tannhäuser Lieder of Julius Wolff (1834-1910) were published in Copenhagen in 1884, though there is an earlier set on the Tannhäuser theme, the Seven Songs, Op 3 (1880), to poems by Holger Drachmann. All of his songs are fastidiously crafted and though a few are tinged with the salon taste, the present set has a Grieg-like freshness. It would seem that Sjögren lost no opportunity of promoting his music. During his visit to Paris in 1911, Sibelius was invited to Sjögren’s home there and apart from having to sit through his own songs indifferently performed by the American soprano, Minnie Tracey, there were ample helpings of Sjögren. ‘Left in a bad temper, my ears ringing with all this Sjögren’, he confided to his diary, ‘Is it to suffer this sort of thing that one comes to Paris?’. Perhaps he would have felt differently had the present songs been on the evening’s bill.

As with Sjögren, song is central to Ture Rangström (1884-1947) whose output numbers two hundred and fifty – not surpisingly, perhaps, as he himself possessed a fine tenor voice and became a sought-after teacher of singing. Unlike Sjögren, Rangström also composed for orchestra and wrote four symphonies, the first of which, ‘August Strindberg - In memoriam’ (1914), reflects his lifelong devotion to the great Swedish writer. He even composed an opera, Kronbruden (‘The Bridal Crown’), based on Strindberg’s drama. He studied for a time with Pfitzner and his idiom is as neo-romantic as his mentor’s, though his mastery of the symphonic canvas – and for that matter of the orchestra itself – is, perhaps, less than consummate. As a romans composer, however, he is very special. There is a directness and purity of utterance that seem to go straight to the heart of the poem – and for that matter the heart of the listener – as well as a complete absence of artifice that serves to make his art all the more poignant.

Pan, a setting of Bo Bergman (1869-1967), and Den enda stunden (‘The Last Hour’) from Runeberg’s Idyll och epigram, said to be one of the most beautiful poems in the language, which he set in 1917, show this economy of means to striking effect. The closing phrase of the latter is of an inspired simplicity that is quite haunting. The fact that he was a poet himself may have something to do with it. He provided the text for Stenhammar’s cantata, Sången (‘The Song’), and, incidentally, succeeded Stenhammar when, in 1921, he stepped down as conductor of the Gothenburg Symphony Orchestra.

Wilhelm Stenhammar (1871-1927) is generally thought of as the most important Swedish composer after Berwald. His father, Per Ulrik Stenhammar (1829-1875) had himself been a composer, and at home in his childhood the family could muster a vocal quartet for which he composed a number of small pieces, though most of his youthful output was for solo voice. After studies at home in his native Stockholm, he went to Berlin in the 1890s where he made quite a name for himself, particularly as a pianist. He was a noted interpreter of the Brahms D minor concerto and was only twenty-one when he composed his own first piano concerto, in B flat minor. It says much for his renown that its first performance took place in Berlin under the baton of Richard Strauss. Stenhammar’s early music was torn between Brahms, whose influence surfaces strongly in the Fantasies, Op 11, for piano, and Wagner, whose fingerprints linger over Florez och Blanzeflor (‘Flower and Whiteflower’), Op 3, and the opera Tirfing. In his mature work there is something of Fauré’s classicism and reticence, and Elgar’s melancholy and nobility. Yet his sensibility is distinctly northern, and his personality, though not immediately assertive, becomes more sympathetic, more strongly defined and compelling as one comes to grips with such masterpieces as the Serenade for Orchestra and the Second Symphony.

Stenhammar must have been a formidable pianist, too, for apart from his chamber-music playing with the Aulin Quartet, he gave demanding recital programmes. One included Beethoven’s Opp. 109 and 110 sonatas before the interval, followed afterwards by the ‘Diabelli’ Variations! True, he turned more and more to conducting in his later years, first at the Royal Swedish Opera and then at Gothenburg. Apart from the classical repertoire he programmed such composers as Debussy, Reger, Strauss, Mahler (the Fourth Symphony and Das Lied von der Erde) and, of course, Sibelius and Nielsen, all of which was very much ‘contemporary music’. It is less well-known that he was much in demand as an accompanist and toured extensively with no less a singer than John Forsell. His song output is both extensive and of quality. Looking through his list of songs, Sibelians will note some familiar titles, including a setting of Runeberg’s Flickan kom ifrån sin älsklings möte from 1893. This precedes Sibelius’s setting by some seven years. And though Stenhammar may not always distill the same powerful atmosphere, he has an eloquence all his own. The songs are invariably short but are always perfectly fashioned: Stenhammar’s fastidious craftsmanship and impeccable taste always tell.

The last of our four composers Gösta Nystroem (1890-1966) also possessed a many-facetted talent. Before the First World War he settled in Copenhagen, and then in the 1920s in Paris where he long pursued a dual career as painter and composer. On returning to Sweden in 1932 he became director of the Göteborgs Konsthallen (the Gothenburg Art Gallery) before returning to music. He was active as a music critic until the late 1940s before devoting himself completely to composition. Nystroem had a lifelong love of the sea and even when he lived in Paris would go to the coast as often as he could. He possessed a fine baritone voice and was an accomplished pianist. Although he is best remembered for the Sinfonia espressiva (1935) and the impressive Sinfonia concertante for cello and orchestra (1944), one of his most striking wartime works is Sånger vid havet (‘Songs by the Sea’, 1943). This included a text by Ebba Lindqvist, and some seven years later he returned to her poetry in Själ och landskap - Nya sånger vid havet (‘Soul and Landscape - New Songs by the sea’). In his songs the text was always paramount: he saw the composer’s function as to enrich and elevate the poem, to heighten its atmosphere. In the last two decades of his life he lived on Sarö, on the west coast, where he could see the sea – to him ‘a symbol of the free flight of the intellect’. Det enda (‘That is all there is’) is drawn from the soprano solo in the central section (Figs. 66-73) of the Sinfonia del mare (1948), which eloquently enshrines Nystroem’s love of the sea.