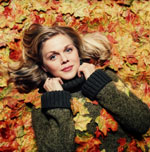 Miah Persson was born in Örnsköldsvik in Sweden. After living in Paris for a year she studied lieder, sacred music and opera at the private conservatoire Kulturama in Sweden. In 1994 she joined Opera Studio 67 in Stockholm and in 1996 continued her studies at the University College of Opera, also in Stockholm. She sang for the Royal Swedish Opera where her roles have included Mozart’s Susanna and Pamina, Humperdinck’s Gretel, Sophie (Der Rosenkavalier), Frasquita (Carmen), Sandrina (La Finta Giardiniera) and Dorinda (Orlando). She made her French debut singing Héro in Berlioz’s Béatrice et Bénédict with the European Union Opera at the Théâtre des Champs Élysées and has performed Scarlatti’s Griselda at the Deutsche Staatsoper, Berlin, and in Innsbruck with René Jacobs – and also Nanetta (Falstaff) at the Aix en Provence Festival and Théâtre des Champs Élysées. More recently she has sung The Governess in Britten’s The Turn of the Screw at Frankfurt Opera, Sophie with the New Zealand Festival, and Almirena (Rinaldo) in Montpellier and Innsbruck. Her extensive concert repertoire includes Bach, Handel, Haydn, Fauré, Mozart and Rossini. She has sung the Mozart Requiem in St Moritz with Vladimir Ashkenazy, and, with the Monteverdi Choir and Sir John Eliot Gardiner, took part in the Bach Pilgrimage in 2000. She sang in Schumann’s Faust Scenes in New York, Lucerne, and London at the Proms where she sang in Bach’s Magnificat in the 2000 season. A committed recitalist, she has recorded with Roger Vignoles for the BBC ‘Voices’ programme and given recitals in London’s Wigmore Hall, at the Aix en Provence Festival and at the Royal Opera in Sweden.