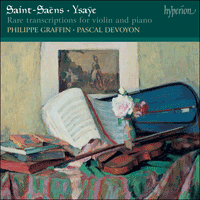 Over the last few years Philippe Graffin has been on a voyage of discovery researching little-known works for the violin by well-known masters. March of this year saw the release of his particularly well-received disc of Rare French works for violin and orchestra, and this month we release a disc of works for violin and piano that also emerged from his investigations. These pieces have been uncovered in private collections and various libraries, including the Library of Congress in Washington, D.C.

These are fascinating transcriptions by Saint-Saëns, one of the most celebrated pianists of his time, and the equally celebrated violinist Ysaÿe. Having assisted in bringing them to light, Graffin performs them here with his customary virtuosity and grace, accompanied by the equally deft French pianist, Pascal Devoyon, on a disc that will educate, delight and amaze.

‘Graffin's tone throughout is sweet and seductive, his phrasing a thing of pure joy … a wonderful disc. Buy it’ (Gramophone)
‘Fascinating … Graffin and Devoyon offer fine, committed performances … Graffin produces a beguiling tone’ (BBC Music Magazine)
‘The music collected here is very enjoyable … this is the second disc of music by Saint-Saëns that I have heard from Philippe Graffin, and it is just as enjoyable and interesting as the earlier one … excellent booklet notes’ (American Record Guide)
‘Beautifully played by virtuoso musicians, this is a thoughtful and insightful recording, enhanced by the lovely Fantaisie for violin and harp’ (Classic FM Magazine)
‘Graffin's performances are especially remarkable for their breathtaking virtuosity, profound lyricism and expressive freedom … the players’ accounts of Saint-Saëns’ two Chopin transcriptions are faithful to the composer’s tradition, their long-breathed melodies, range of sonorous tone colour, unerring sense of nuance and seeming inevitability of rubato demonstrating all the requisite imagination … outstanding … technical prowess and poetic subtlety’ (The Strad)
‘Strongly recommended’ (Fanfare, USA)

Although often circumstantial, Saint-Saëns had a very personal relationship with the violin throughout his life. Inspired by friendship, the works presented here are an intimate counterpoint to his more ambitious output for the instrument. His earliest transcription, the Fantaisie on motifs from Carl Maria von Weber’s Oberon, was composed in 1850 when he was fifteen. It was in fact officially co-written with his friend, the violinist Achille Dien. While it is clear that both these young musicians were already virtuosos on their respective instruments, one suspects that the young pianist already challenged his violinist. Even though Saint-Saëns’s mature style is not yet evident, his enthusiasm for Weber’s work is palpable, as is the work’s second-degree humour, having fun not only with but also about the work.

A few years later, in 1859, it was also for a newly acquainted friend—the precocious Spanish violinist Pablo de Sarasate—that Saint Saëns wrote his Caprice brillant, while they were both studying at the Paris Conservatoire. It constitutes a significant step forward from his attempts the previous year at writing a violin concerto. The original Caprice brillant had been thought lost by its author, who some twenty years later transformed and orchestrated it, with some interesting changes, into the third movement of the famous third Violin Concerto, also written for Sarasate. Yet Saint-Saëns had not forgotten its origins, and subsequently re-edited the finale of the third Violin Concerto, once again as a separate piece for violin and piano, the Allegro de concert.

The Caprice brillant is a true duo where the pianist is an equal partner to the violinist. Its Lisztian piano part is a testament to Saint-Saëns’s phenomenal keyboard technique. Besides the curiosity of rediscovering the previous guise of a familiar piece, this setting also gives a hint about the spirit in which it was written: the Spanish character of the theme, a private tribute to Sarasate, the virtuosity as a game to be shared, and the visit to the very serious Wagner in the central episode only to be teased away naughtily.

As transcriptions often originate from an artist’s frustration at not being able to play something loved deeply, it is all the more fascinating that Saint-Saëns, one of the most celebrated pianists of his time, chose to transcribe Chopin’s music for the violin. One of the greatest regrets in his life was not having heard Chopin play during his youth, and these two intimate nocturnes are a testimony to his love of Chopin the composer. Sarasate had already paved the way from Chopin to the violin with his transcription of the famous Nocturne in E flat major Op 9 No 2. But where a violinist would tend to emphasize Chopin’s melody by simply having the violin play the thematic line and leaving what is left to the keyboard, a pianist knows all too well that it is the harmony that is the essence of the music. With Saint-Saëns, the two instruments are more integrated and interact with one another: the violin seems an extension of the world of the piano.

Saint-Saëns later befriended the great Belgian violinist Eugène Ysaÿe, whose inclination for chamber music made him a central figure in the renewal of French music. Saint-Saëns dedicated to him his first string quartet and the double concerto La muse et le poète (Op 132). Ysaÿe’s choice of the word ‘adaptation’ instead of ‘transcription’ applied to his treatment of Chopin’s E minor Waltz tells us what he intended. With its added middle section making it sound almost like an original violin piece à la Wieniawski or Vieuxtemps, it was written for his own use. Adapting piano repertoire for the violin was, for Ysaÿe, a sort of ‘postgraduate’ way to improve his technique, pianistic virtuosity challenging any violinistic habit or comfort. It is a practice that he passed on to his students.

A more surprising and audacious enterprise in that domain is Ysaÿe’s adaptation of Chopin’s Ballade No 1 in G minor Op 23. This forgotten manuscript, written in London while Ysaÿe was in exile during the First World War, bears witness to an intimate struggle to find solutions to amazingly complicated physical problems. He sometimes wrote so many fingerings on top of each other that one can barely see the notes. Ysaÿe’s adaptation is a masterly violin lesson, not only for its extraordinary and imaginative use of the fingerboard (which makes up for the lack of the range given by a whole keyboard), but also for its sensitivity to colour, especially in response to Chopin’s music. As a result, there is much artistic licence. In fact the words on the front page—‘interpreted and fingered by Ysaÿe’—reveal his stance. From the idiosyncratic technical means, such as the final scale in thirds gliding into a glissando, or the Impressionistic harmonics at the end, these pages are a testament to Ysaÿe’s own interpretative art.

This score was never published. It was nevertheless an inspiration for Ysaÿe to write a Ballade of his own a few years later, the third Sonata for solo violin Op 27, which remains his best-known work. At one point in the manuscript of the Chopin transcription, Ysaÿe has scribbled the word ‘orchestra?’, which suggests that he may also have intended to write a version with orchestra, as was the case for his Caprice d’après l’Étude en forme de valse. Saint-Saëns was so pleased with this arrangement of his Étude en forme de valse Op 52 No 6, that he saw it fit for his own publisher, Durand, to include it in his catalogue. On hearing the first performance, Debussy reported: ‘M. Ysaÿe followed with a performance of his own transcription of an Étude en forme de valse by Mr C. Saint-Saëns, written by the latter for the piano … there are some people who will never understand a joke; why would it be forbidden for Mr C. Saint-Saëns to have some humour?’ However caustic these words may seem, Debussy nevertheless had to concede that Saint-Saëns’s music has a rare quality that is often overlooked: its wit.

Another example is his little piece L’air de la pendule. The front page of the manuscript explains the inspiration for the piece: ‘In memory of my sojourn at the King and Queen of Belgium, in September 1918. This air was copied from an ancient pendulum [which could be seen from their residence] representing Cupid holding a lyre, and next to him was a music stand whereupon lay a sheet along which was written the air that follows.’ The choice of the violin here is again for practical reasons: Queen Elisabeth of Belgium was a good violinist, a student and close friend of Ysaÿe. She was a patron of music and a muse for many musicians. Saint-Saëns had often accompanied her at the piano privately.

The few pizzicati of Cupid’s lyre lead us to another work, the Fantaisie Op 124 for violin and harp (1907) that belongs to the later period of Saint-Saëns’s creative life. Even though dedicated and especially written for two sisters, Marianne and Clara Eisler, it really belongs to Sarasate, who died soon after it was written. A remembrance of things past, the various delicate shades of the Fantaisie’s texture and harmonies, where Saint-Saëns’s piano is transcended into the more ephemeral sound of an imaginary guitar, and the Spanish ostinato suggest a farewell to their youth, and makes for a rare metaphysical touch in his music. The works of Fauré, early Ravel and Debussy, whose Sonata for violin (1917) interestingly also contains a longing reference to Spain, are all echoed here in a joint attempt for an imaginary new ‘French music’.

I wish to thank Hugh MacDonald and Steven Isserlis for bringing the Caprice brillant to our attention, as well as the Library of Congress in Washington, D.C. and Jennifer Morsches for their invaluable help.