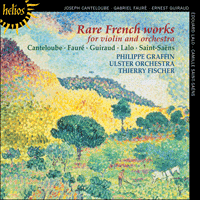 This is a collection of absolute gems. The one-movement Concerto by Fauré is the only movement to have survived from an original three-movement violin concerto, and Saint-Saëns's Morceau de concert was originally intended as the first movement of his third violin concerto. Lalo's Fantaisie norvégienne, with its utterly gorgeous slow movement, was to become the inspiration behind Bruch's Scottish Fantaisie, and Guitarre is an early encore piece for violin and piano (later orchestrated by Gabriel Pierné) that Lalo (himself a violinist) wrote for his own use. Guiraud, who taught composition to both Debussy and Dukas, wrote the haunting Caprice for Sarasate, and the Poème by Canteloube shows much of the charm he is now so famed for through his Chants d'Auvergne.

The combination of Romantic French music for violin and orchestra, the ever-exquisite playing of Philippe Graffin, and superb accompaniment from the Ulster Orchestra under Thierry Fischer makes this disc quite simply enchanting.

'He had been good enough to ask me, in the most casual way possible, to write a concerto for him. Greatly flattered and delighted at the request, I made him a promise and kept my word with the concerto in A major [Op 20].’ So wrote Saint-Saëns in 1859 at the beginning of his collaboration with the great Spanish violinist Pablo de Sarasate. For the next thirty years the presence of Sarasate, a Parisian by adoption, was to be seen behind all the significant contributions to the genre, with works especially tailored for his playing.

Often described as a supremely elegant virtuoso it is probably fair to say that Sarasate’s musical personality helped in shaping a genuinely new idea of the concerto, very different from the style established by Paganini. There was now more interaction between soloist and orchestra and an increased sense of musical purpose behind the virtuosity. By the late 1870s, Sarasate was already the dedicatee of such popular successes as Saint-Saëns’s Introduction and Rondo capriccioso Op 28 and Lalo’s Symphonie espagnole. He was all the more essential to those writing a violin concerto, but less and less available, with a heavy concert schedule keeping him away from Paris for most of the season.

It is probably coincidental that Édouard Lalo finished writing his Fantaisie norvégienne at the time that the composer Johan Svendsen was moving into Sarasate’s Paris apartment in September 1878. However, the recent popularity of Norwegian music, from Svendsen’s own Rapsodies norvégiennes to Grieg’s chamber works and songs, cannot be without influence on its existence. We know that Svendsen—himself a renowned violinist—visited Lalo in November of that year, when it is probable that this Fantaisie was discussed. On the 13th of that month Lalo wrote to Sarasate, who was away on a long tour:

… I should be used by now to your silence sickness, but as I have been waiting for some news on ‘la norvégienne’, whom I still don’t know, I have been counting the days. Not seeing anything come from you, I had started to admit to myself that you did not like her, that I had missed its orchestration, and that you were backing off, day after day, for the moment when you were going to announce to me this sore failure.

Lalo gave up too early on his faithful friend and started to transform the Fantaisie into the now well-known orchestral work, Rapsodie norvégienne. Meanwhile Sarasate was already learning the piece, and soon after, on 1 December 1878, he gave the premiere with Max Bruch conducting. (This inspired Bruch to write his Scottish Fantaisie Op 46, written immediately afterwards for Sarasate and based on the same concept.)

Even though most of the thematic material of the Fantaisie norvégienne is derived from true folk songs and dances, which Lalo claimed to have found in a publication from Christianna, he used for the first part a song, ‘Fjeldlat’, extracted from Grieg’s Folkelivsbilder Op 19, published in 1872. A long controversy followed in which Lalo’s own son, the powerful music critic Pierre Lalo, felt the need to defend his father’s view that these were all genuine folk tunes twenty-five years after the composition was completed. Grieg, who once asked Lalo if he could take some lessons with him on instrumentation, didn’t seem to mind, writing to a friend: ‘… allow me, please, to take this small theft as a compliment’.

Guitarre, Op 28, is an encore piece for violin and piano which Lalo (himself a violinist of Spanish descent) wrote for his own use. It was Gabriel Pierné who resurrected the work when he orchestrated it, long after Lalo’s disappearance, to suit one of his programmes with the Colonne Orchestra.

Ernest Guiraud is mostly remembered today as the supportive composition teacher of both Debussy and Dukas and for having composed some of the recitatives in Bizet’s Carmen, as well as completing the orchestration of Offenbach’s Tales of Hoffmann. He was also a composer in his own right, having won the Prix de Rome, and his comic opera Piccolino (1876) was a huge success in its time. He also received a prize for the best orchestral work of the previous two years, beating Saint-Saëns by twenty-eight votes to ten. As Massenet testified at his funeral, Guiraud was unanimously loved and admired by his colleagues, a sentiment that was also expressed by Saint-Saëns’s and Dukas’s decision to orchestrate Guiraud’s opera Frédégonde after his death.

Guiraud’s Caprice was written in 1884 and dedicated ‘to my friend Sarasate’. It was meant to follow in the footsteps of Saint-Saëns’s Introduction and Rondo capriccioso, or at least that must have been the idea. Unfortunately, even though Sarasate performed the work, and it was published soon after, Guiraud’s music, which was mostly operatic, fell slowly into oblivion after his death. The musical world was changing, and the Caprice failed to find its place in the repertoires of the next generation of violinists.

As a faithful chamber-music player of the newly founded Société nationale de musique, the young Belgian violinist Ovide Musin (who was Ysaÿe’s elder by just four years), represented for Gabriel Fauré a more approachable and less imposing partner for his projected Violin Concerto (1878–80). Fresh from the success of his Violin Sonata No 1, Op 13, Fauré seems to have seen in the violin an ideal medium for his music. Judging by its large scoring and the scale of its first movement this must have been a very ambitious enterprise worthy of his enthusiasm. Although one does not immediately associate Fauré with the concept of the concerto, with its tradition of virtuosity and bravura, one can see that Saint-Saëns showed a pathway here. At this period in his life Fauré’s composing had to make way for a barrage of administrative duty and the concerto therefore had a lengthy gestation.

The projected second movement Andante was written first, and performed on 20 December 1878 at the Société nationale in Paris, by Musin with André Messager at the piano. By the following summer Fauré wrote to his friend Pauline Viardot that he was happy with the progress of the concerto, and believed that it would soon be finished. He stressed that he had material for the finale, and that although it was a difficult task he hoped to complete it.

But destiny had another view. Fauré never could bring himself to complete the last movement of his concerto, and Musin performed the first and second movements only on 12 April 1880, with Édouard Colonne conducting. While it might be easier for us, with hindsight, to see the intrinsic dichotomy at the heart of the project, I find this attempt—a trace of his inner searching—all the more moving. Furthermore, Fauré never forgot this music. The Andante was later transformed to become his Op 75 for violin and piano, and in his very last work, the String Quartet Op 121 written some thirty years later, he reused the first motif of the Violin Concerto. While the score of the Andante has been lost, the first movement—the full score of which has survived—is a rare and precious testimony to Fauré’s subtle knowledge of orchestration.

The Morceaux de concert by Fauré and Camille Saint-Saëns are contemporaneous and were not only written for the same violinist but were also both intended as the first movement of a major concerto—in Saint-Saëns’s case his Violin Concerto No 3 in B minor, Op 61 (1880), written and dedicated, yet again, to Sarasate. In reworking his Caprice brillant, a duo for violin and piano written for himself and Sarasate fourteen years before, Saint-Saëns saved his Concerto in B minor from a fate similar to Fauré’s Concerto. However, he shared with his former student a long struggle to complete its first movement: numerous sketches testify to this hesitation. The Morceau de concert, Op 62 (1880), was once considered as an alternative to this movement. Ovide Musin was available to learn it and the work was published that year and dedicated to him.

Joseph Canteloube (de Malaret) is still unjustly associated with only one work, his celebrated Chants d’Auvergne. The genesis for his Poème began in 1918 while Canteloube, a great pianist, was touring in the south of France as the duo partner of the violinist Gaston le Fleuve. The concept owes much to Chausson, but it is one of the works of Canteloube where we can not only appreciate his luxurious orchestration and harmonic language, but also hear his unique melodic creation. He often felt shortcomings in this regard, and found for a large part his inspiration in various folk cultures from around the world, often describing himself as a régional composer. The Poème was reworked in 1937–8, and the violinist André Asselin gave the premiere. I was fascinated to read recently a most diplomatic letter from this violinist to Canteloube, answering the composer’s anxiety about the ‘heaviness’ of the orchestration, and how during the performance he could hear himself better then he had anticipated. This is, however, a problem that is often attributed to Chausson as well, and to take Asselin’s words, this Poème is ‘more beautiful and moving still than I had expected it to be […] and it brings to life an enlightening artistic experience’.