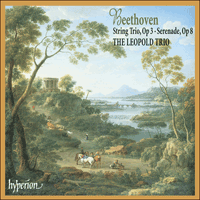 This CD, with its companion CDA67254 (available separately), presents all of Beethoven's music for string trio, even including the alternative 'trio' (Hess 28) of the Scherzo movement of Op 9 No 1. Although these works bear early opus numbers they should not be regarded as anything other than first-class, mature Beethoven. They are fine, absorbing pieces, not as well known as they should be—a state of affairs which these wonderful CDs should do much to rectify.

‘This repertoire has been recorded by some world-famous artists in the past, but no performances have given me as much pleasure as these. A real treat’ (BBC Music Magazine)
‘An oustanding pair of discs’ (The Daily Telegraph)
‘The most sensitive reportage that these works have enjoyed since the advent of digital recording’ (The Independent)
‘A remarkably gifted young ensemble who bring classical elegance to these glorious works’ (Classic CD)
‘[A] startlingly good debut’ (The Scotsman)
‘Here is the finest string ensemble in Britain’ (Daily Mail)
‘One of the best and most beautiful ensembles to emerge blinking into the sunlight from London's conservatoires in recent years’ (The Evening Standard)

In mid-November 1792 the twenty-one-year-old Beethoven arrived in Vienna from Bonn. He had arranged to study with Haydn, and began to do so at once, as his noted payments to the older composer reveal. These official lessons continued until Haydn left for England in January 1794, but it seems that help with Beethoven’s new compositions never formed a part of the tuition, since the preserved fruits of the study consist only of improvements made, under critical supervision, to a number of the younger composer’s earlier (Bonn) compositions. Later study by Beethoven with Albrechtsberger, and just possibly with Salieri, apparently did not touch on chamber music.

Beethoven’s important early works for string trio seem to have been composed fairly independently of his teachers, and were probably written as vehicles for self-instruction in what was then considered to be a ‘difficult’ musical medium. The Trio in E flat major, Op 3, was composed in mid or late 1795. It opens with a bold, almost orchestral effect, combining syncopation with repeated chords in a brusque first subject. The whole work is notable for its clever variety of rhythms and textures, and its defined character is remarkable even if we compare it with the more assertive aspects of the Opus 1 Piano Trios, the Opus 2 Piano Sonatas, or other known early Vienna products. It has been suggested that the six-movement structure of Op 3 was directly modelled on Mozart’s recently published (by Artaria in 1792) Divertimento in E flat major for string trio, K563, in which, also, two different Menuetto and Trio alternative pairs are heard on either side of a slow fourth movement, but if Beethoven was indeed affected by the earlier masterpiece, it seems rather that he was reacting to, or even against, Mozart in this work. Not until the Serenade in D major, Op 8, was Beethoven to choose a more divertimento-like style and address. The Allegro con brio (considered to be a fast speed at that time), with both its fiery opening material and much of the lighter material, would have been tricky for standard string players—especially in the key of E flat, not then regarded as ideal for strings. The premature ‘false recapitulation’ in F minor anticipates the proper one by nearly forty bars, extending the development section to about twice its predictable length, but the forward pointing of the thematic restlessness compensates for these rather unorthodox proportions. Beethoven was still composing his Opus 1 (three piano trios) around 1795, and at some early stage he started to adapt the first movement of this work for that medium; the authority of his copying hand is clear, even though suggestions for keyboard figures seem to be much more sketchy.

The Andante—in more standard sonata form—is built intriguingly around gentle anacruses and figures in which rests seem almost as important as sounded notes. Although the development is more in the manner of a sonatina movement than one from a sonata, a delightful touch appears soon after the recapitulation where the extension of the opening by the viola is no longer doubled at the octave by the violinist, as formerly, but is instead accompanied by expressive descanting figures. A few bars later in the recapitulation the rhythms are cunningly disguised to create an illusion that the players have drifted out of syncopation, but Beethoven is simply developing rhythmic patterns to their own benefit. A notable device just before each double bar is the stressed off-beat ostinato in the viola part. The special features of this movement were all to continue as Beethoven trademarks for many years; this Andante in B flat seems particularly to anticipate the Eighth Symphony, composed in 1812. The two Menuetti, each to be heard alternativement with its Trio (the second Trio actually being headed simply ‘minore’), demand different tempos (the standard Allegretto and the faster Moderato, respectively). In each case the rather more pointed and even slightly military character of the Menuetto is offset by the lighter Trio—indeed the ‘minore’ seems eventually to evaporate in solo-violin heights of ecstasy; the far from impractical Beethoven sees to it that his soloist has time to descend from the high position before having to start either the repeat or the reprise of the Menuetto: Moderato. The warmly expressive Adagio in A flat is fluidly expressive, with the instruments exchanging the coloratura lines in a remarkably mature manner. The A flat Adagio of the later Piano Sonata Op 10 No 1 inhabits a similarly expansive world to even more striking harmonic effect.

The Finale: Allegro of Opus 3 probably owes some debt to Beethoven’s contrapuntal studies with Albrechtsberger, who seems to have stood in semi-officially for Haydn during the latter’s absences abroad during the mid-1790s. In any event it is a witty contrapuntal movement, of the emphatic type that remained a Beethoven speciality long after he had ceased to compose string trios—the motto-adorned last quartet movement (Op 135, movement 4) has something of the same manner, and there are examples also in the last piano sonatas. Here, as later, the composer is apparently not at all worried when, at times, strict counterpoint has to make way for even more emphasis, such as from bar 199 where each of the participating solo lines enters in turn with the same triplet subject; it looks like fugue, but actually it is but the same declamation, amplified threefold by repetitions at the octave. That is yet another Beethoven trademark, already displayed at the age of twenty-four.

The Serenade in D major, Op 8, is by contrast a far less serious work. It took some time to compose during the following two years or so (1795 to 1797) and was published by Artaria in 1797. It opens and closes with a march, using the same thematic material, but the preserved dynamic markings preclude any approaching crescendo or any diminuendo to simulate departure. The Serenade was challenging material to play by the apparent standards of the time, but it looks as though Beethoven was already acquainted with the great violinist Schuppanzigh at this time. The Adagio which follows the Marcia has so much of the character of string-quartet music, in which the leading violinist plays solo decorations after the pattern of an aria, that an association with the semi-contemporary Opus 18 Quartets, and also even already with Schuppanzigh, may not be too fanciful. Unlike anything in Opus 3, this movement seems intended to be deeply restful. The Menuetto and Trio have a nimble eloquence that culminates in delightful pizzicati. The second Adagio opens with a deeply expressive duet for the violin and viola doubling in octaves and the cello; this is barely established when it is brusquely interrupted by a short section of much faster and wider-ranging material, Scherzo: Allegro molto. Almost inevitably it seems, the soulful Adagio duet—with doubling—returns; after a further scherzando interruption the original philosophical material returns finally to round off the movement.

Next comes a spirited and lively Allegretto alla Polacca, one of the few real polonaises to survive from the period between those of Wilhelm Friedemann Bach (another specialist) and Chopin. Beethoven seems to approach this temporary excursion into couleur locale with special relish. A rather more orthodox theme (Andante quasi allegretto) and six variations come next, perhaps for the only time in the string trios showing influence from the music, or even teaching, of Haydn. The Marcia follows a rather special cello variation to complete the entertainment.

It might be claimed that the Opus 3 Trio and the Opus 8 Serenade are apprentice works for the maturing craftsman-composer and that they have as much importance as precursors of other works as they do in their own right. In good performances, however, they manifest their own value irrespective of their chronological place in Beethoven’s output. They appeal and are effective without any call for apology. These works for string trio do actually mark—as contemporaneous works for other media do—that the apprentice has already reached recognizable maturity in his creative craft: they really are, to use the term in both its original and its more usual modern sense, masterpieces.